When Martin Luther posted his 95 Theses on Oct. 31, 1517, he hoped to spark a theological conversation about repentance.

Instead, the German monk unleashed a revolution — ideas that transformed Western Europe and eventually the world. His posting on Wittenberg’s Castle Church door might be the most eventful trick-or-treat in history.

Five hundred years later, Christians — and not only Protestants — are still living with the changes wrought by the Reformation he started.

Here are six developments we have today thanks to that fateful All Hallows’ Eve. 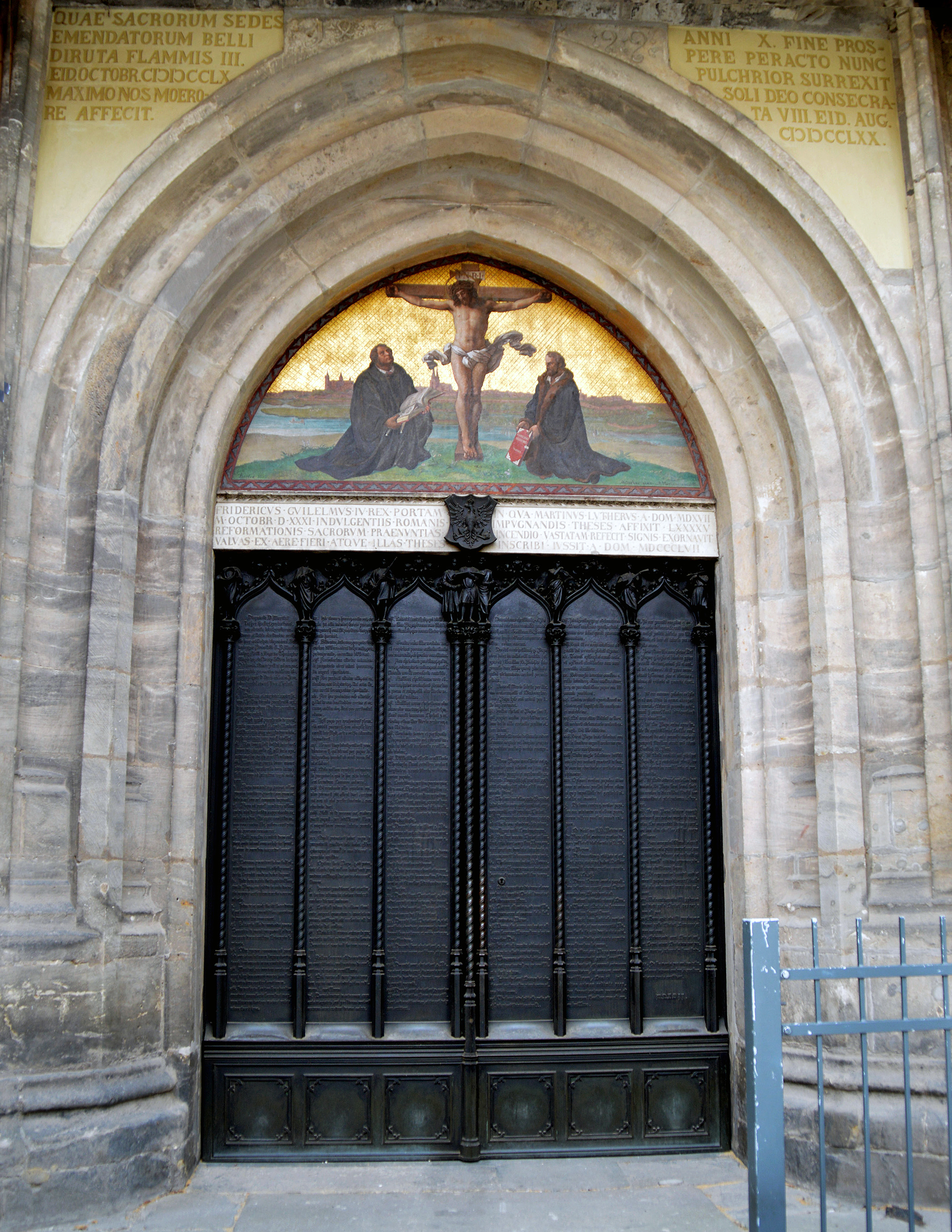 The door at Wittenberg’s Castle Church where Martin Luther reportedly posted his 95 Theses, launching the Protestant Reformation. At the time, the door served as a sort of university bulletin board. Today, his theses are engraved in the door. Photo by Klaus Ulrich Ruof.

Luther was not the first person to call for reform in the Catholic Church. But you might say he was the first to go viral.

The printing press, the internet of his day, spread his ideas far beyond the university town of Wittenberg. In the days before copyright laws, different printers had no problem with publishing the same works multiple times. Think of it as the 16th-century version of retweets.

At one point, an estimated 20 percent of the texts published in Europe had Luther as author, said Richard Manly Adams Jr., interim director of the Pitts Theology Library.

The library — part of United Methodist Candler School of Theology at Emory University in Atlanta — is home to the Richard C. Kessler Reformation Collection, which includes the largest assemblage of Luther’s writings in North America. The library recently discovered the collection includes two examples of Luther’s own handwriting.

Among Luther’s influential works are three treatises from 1520 that argued both lay and clergy shared in the priesthood of Jesus. This marked the beginning of the doctrine known as the “priesthood of all believers,” meaning all baptized have direct access to God without a human mediator.

This equalizing idea shaped much of what followed.

The Bible in everyday language

If all baptized are priests, they all should have ready access to God’s word. That premise led Luther to what was perhaps his most momentous work — a translation of the Bible into vernacular German.

He wasn’t the first to translate the Old and New Testaments into a language other than Latin. However, Luther was the first to look to the original Hebrew and Greek in his work (rather than Jerome’s Latin Vulgate).

“Some people say he wasn’t such a great scholar of Hebrew or Greek,” said Jonathan Strom, professor of church history at Candler. “But what Luther was brilliant at was developing a sort of idiom for the Bible, and it stuck.”

Among the people influenced by Luther’s translation was the English reformer William Tyndale, who likewise wanted to produce a Bible in his people’s language. Tyndale’s efforts ultimately led to his martyrdom, but not before he completed the translation that would help shape the Geneva Bible used by William Shakespeare, the Pilgrims and the translators of the King James Version.

Luther’s impact is felt whenever people encounter the Bible in words they can understand.

The Council of Bishops will join in an ecumenical service to observe the Reformation’s 500th anniversary at noon Oct. 25 at the United Methodist Building in Washington.

Emory University’s Candler School of Theology in Atlanta will mark its annual Reformation Day with worship, lectures, a concert and celebration from 9 a.m. to 9 p.m. EDT Oct. 26.

“Godspeed: Voices of the Reformation,” devotions by David Teems based on the writings of Martin Luther, William Tyndale, John Calvin and other reformers.

Luther did not stop with Scripture. He also translated the Latin Mass into everyday language.

That in turn influenced the creation of England’s Book of Common Prayer, which John Wesley would later adapt for his Methodist movement.

Luther also encouraged Christians to pray together in daily services, said Lucy Lind Hogan, the Hugh Latimer Elderdice professor of preaching at United Methodist Wesley Theological Seminary in Washington. She is teaching a special course this semester titled “Luther at 500.”

“He believed gathering frequently for prayer was important in encouraging people’s understanding of themselves as part of the priesthood of God,” Hogan said.

The Reformation benefited from rising literacy that began in the 1440s with Johannes Gutenberg’s invention of the printing press. But reformers broadened literacy and educational opportunities still further.

After all, if you want to understand the Bible or join in a hymn, you need to know how to read.

Some Christians criticized this emphasis on theological education as privileging book learning over rituals, emotions and good works, Johnson said. The Methodist movement, with its emphasis on social holiness, helped correct this imbalance.

“At the same time, lay education has been a powerful force for lay engagement in the church, economic progress and democracy,” Johnson said. 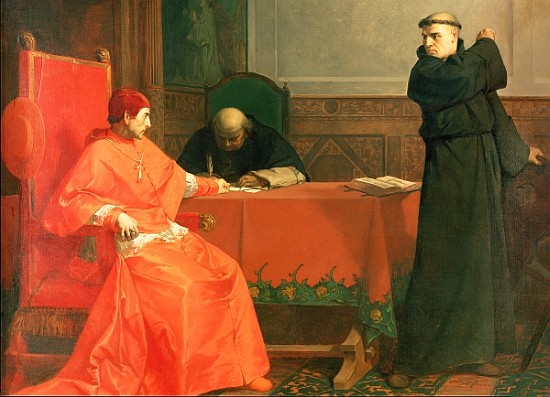 Martin Luther in front of Cardinal Thomas Cajetan during the controversy of his 95 Theses. Luther was summoned by authority of the pope to defend himself against charges of heresy before Thomas Cajetan at Augsburg in October 1518. Painting by Ferdinand Pauwels (1830-1904), public domain, courtesy of Wikimedia Commons.

However, the Reformation wasn’t all about empowered laity and joyful chorales. There was a definite dark side to the revolution and to Luther himself.

For one thing, the Reformation marked a splintering of denominations that Christians still live with today. Luther did not set out to form a breakaway movement, but once Catholic hierarchy declared him a heretic, he opposed his former church home with fervor. He also was frequently at odds with other reformers.

Debates over doctrine soon exploded into bloody wars that would cause death and destruction off and on for the better part of a century.

As vitriolic as Luther was about Catholics, he was even more vicious in his late-in-life writings about his Jewish neighbors. His anti-Semitic rhetoric would echo in the brutality of Nazi Germany.

Strom, the Candler professor, said observing the Reformation’s anniversary should also be a time of repentance.

He suggested today’s Christians heed the first proposition in Luther’s 95 Theses: “When our Lord and Master Jesus Christ said, ‘Repent’ (Matthew 4:17), he willed the entire life of believers to be one of repentance.”

Luther took on the power structures of his day when he refused to recant even in the face of excommunication and possible execution. His challenge to church authority also ignited other uprisings he did not anticipate.

He denounced the peasants who, inspired by reforming zeal, rose up against the oppression of nobles and landlords.

“Lady Liberty owes a great debt to Martin Luther,” said David Teems. He is author of “Godspeed: Voices of the Reformation,” a just-released Abingdon Press book of devotionals using writings by Luther and other reformers.

“Does the pope set up laws?” Luther wrote in a 1520 treatise. “Let him set them up for himself, and keep hands off my liberty, or I will take it by stealth!”

Teems called Luther “a true champion of the conscience.”

Inspired by that spirit of defiance, a Baptist pastor named Michael King reportedly decided to change his name and that of his young son to that of the reformer’s. The Rev. Martin Luther King Jr. went on to champion freedom and justice in his own way.

For United Methodists, Luther’s most direct impact may be his staunch defense of the freedom Christians have through Christ’s justification by faith.

Hearing Luther’s preface to Romans helped spur Wesley’s spiritual renewal on the night of May 24, 1738.

“About a quarter before nine, while the leader was describing the change which God works in the heart through faith in Christ, I felt my heart strangely warmed,” Wesley wrote in his diary. “I felt I did trust in Christ, Christ alone for salvation ….”

With his heart warmed, Wesley went on to found the movement United Methodists know today. And it likely would not have happened without the Reformation.

Hahn, who grew up in the Evangelical Lutheran Church in America, is a multimedia news reporter for United Methodist News Service. Contact her at (615) 742-5470 or [email protected]. To read more United Methodist news, subscribe to the free Daily or Weekly Digests.

Now a prominent businessman, Isaiah Musabayana launched a scholarship program for students at two United Methodist mission schools he attended in the mid-1980s.