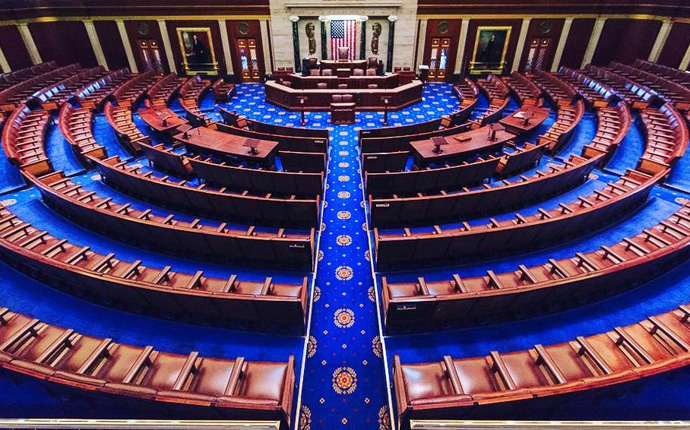 A view of the United States House of Representatives chamber at the U.S. Capitol in Washington, D.C. Photo courtesy of Wikimedia Commons.
United Methodists serve on each side of the aisle in the 117th U.S. Congress, which faces the work of responding to a wounded nation and breached Capitol building.

The newly started Congress has 31 United Methodists — 17 Republicans and 14 Democrats. Six of the denomination’s members serve in the Senate and 25 in the House.

This compilation, based on such sources as Pew Research Center, CQ/Roll Call, and Ballotpedia.com, includes 533 members of Congress. New York’s 22nd Congressional District is still undecided. Newly elected Republican Rep. Luke Letlow of Louisiana’s 5th District died of COVID-19 on Dec. 29, necessitating a new election.
In addition, three United Methodists came up short at the ballot box. Former Rep. Steve Watkins of Kansas was defeated in a Republican primary, and former Sen. Doug Jones, an Alabama Democrat, lost his bid for re-election. Most recently, former senator and Georgia Republican David Perdue did not prevail in the Jan. 5 runoff.

While the number of Protestants in Congress has held relatively steady in recent years, those who do not specify a particular denomination has more than doubled since the election of 2008. Pew reports that 96 Congress members (18%) identify themselves simply as Protestants or as Christians. That compares to 39 members in the 111th Congress that opened 12 years ago.

They come to their office at a challenging time for the United States as a whole and Congress in particular after a mob stormed the Capitol building on Jan. 6.

While United Methodists are fewer in number, one already caused controversy days before the assault.

U.S. Rep. Emanuel Cleaver II, a Democrat from Missouri and ordained United Methodist elder, delivered the opening prayer of this congressional session on Jan. 3. He spurred criticism from some Republicans and United Methodist traditionalists after he closed that prayer with a multi-faith invocation of God, that named the Hindu God Brahma, and then ended with the words “Amen and ‘A-woman.’”

Cleaver told the Kansas City Star he intended the final words of his prayer as a pun to recognize the record number of women serving in the new Congress. He also urged people to listen to the content of his prayer before the controversial final few words.

“May we model community healing, control our tribal tendencies and quicken our spirit that we may feel Thy priestly presence even in moments of heightened disagreement,” he prayed.

United Methodists also sit in four governors’ mansions. They include Republicans Kim Reynolds of Iowa, Eric Holcomb of Indiana and Tate Reeves of Mississippi as well as Tom Wolf, Democrat in Pennsylvania.

Albert J. Menendez is a freelance political writer who has specialized in the interactions between religion and government since 1972.

Like the main character in the Oscar-winning film, itinerant pastors learn to form community and connection even though they are always on the move.