Sometimes, reducing childhood malnutrition and mortality can be as easy as substituting one crop for another.

That has been the result of a United Methodist initiative in the Kamina area of the Democratic Republic of Congo, in which farmers were introduced to moringa and soybean as replacements for nutrient-poor cassava.

For June Kim, an executive with the United Methodist Committee on Relief who serves as the agency's staff coordinator for the Kamina initiative, such grassroots efforts are key to achieving measurable progress in international goals to eradicate hunger and poverty.

National nutrition strategies are important, she said, but international aid money also must be allotted to implement those plans.

"We have to balance the need for a 'national plan' and the direct need of the people," said Kim. "The more dollars we can put down at the community level, the more of a direct impact we can have at the health and livelihoods of those we are trying to help."

An examination of what are known as the "Millennium Development Goals" regarding hunger and poverty and discussion of a framework for action in the years to come is at the heart of the 2013 Hunger Report from the Bread for the World Institute, "Within Reach: Global Development Goals."

The report's "bulls-eye" recommendation: End hunger and poverty in every country in the world by 2040.

Religious leaders urge world leaders to embrace this "bold" goal. "With concerted effort, a system to hold all nations accountable, and God's help, we believe this is an achievable goal," they said in a statement in the report. 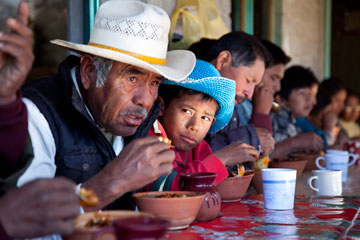 People of many ages share a community meal in San Miguel Huautla, Oaxaca, Mexico. Young people in rural areas of Mexico like this one often choose to emigrate to the United States to work because there are few opportunities at home.

'A people of visions'

Carter Echols, staff for congregational engagement and church relations for Bread for the World, noted that many congregations already have focused on the Millennium Development Goals "so it's language they understand."

The point of the report, she said, is to build on previous conversations, emphasizing the importance of having the next set of goals to eradicate hunger and poverty.

Even if such goals seem huge, "we (Christians) are a people of visions and prophetic visions," Echols added. "We come from a history of promise and this is a faithful way of doing things."

From Kim's perspective, the report offers a "really good snapshot" of why the goals are important and what more needs to be done.

The report's tables and graphs also show that:

Liberato Bautista, an executive with the United Methodist Board of Church and Society based at the Church Center for the United Nations, noted that while the Millennium Development Goals have become a well-publicized vehicle for discussing hunger and poverty, such popularity "did not necessarily translate into lasting achievements."

The "most minimum" goals, easier to implement, "were chosen over the longer-term struggle for enacting human rights," he said. But those goals were designed to raise the poor from extreme poverty to normal poverty. Sustainability is the key to real progress beyond 2015, he said.

"Sustainability ensures no one is dependent on the other people's charity," Bautista explained. "Empowerment points to the enablement of peoples to find meaningful ways to participate in the civic, political and economic life of their communities."

To truly make change, U.S. churches must challenge the way the government ties aid money to foreign policy rather than need, Kim said.

"What we're encouraging United Methodists to do is move beyond charity," she explained, noting that Americans love their own rights but don't think about the fact that basic human rights are violated in other places every day. "Can we talk about global development absent those conflicts and absent those root causes?" 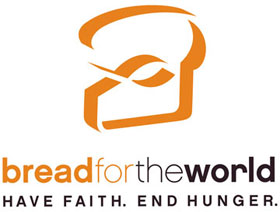 While the report, which includes a Christian study guide, will not change, Echols said, Bread for the World Institute will add resources for congregations on the interactive website throughout the year.

Session 6 of the study guide, related to Chapter 4, focuses on the need for the United States to "exercise leadership" on hunger and poverty goals, both globally and at home. The report shows an increase in U.S. poverty from 11.3 percent in 2000 to 15 percent in 2011. "One of the highest poverty rates in the industrialized world is in the United States," Echols pointed out.

Setting national goals to lift U.S. citizens out of poverty - providing a free secondary school education to every child at the turn of the 20th century and President Lyndon Johnson's "War on Poverty" in the 1960s - succeeded in the past, the report points out.

Bautista said the book he edited and published in late 2011, "Meditations and Devotions on the Millennium Development Goals: A Prayerful Guide," is designed to help United Methodists and others address the challenge of combining practical goals and measurable targets with ethical and moral requirements.

The 232-page guide, which may be purchased online, has a deed tied to each daily devotional to help church groups or individuals "move study into action," he said.