Two of three United Methodist missionaries who had been detained in the Philippines have left the country, and one, Adam Shaw, has been reunited with his family in Ohio.

Tawanda Chandiwana is on the way to his home country of Zimbabwe, the United Methodist Board of Global Ministries reported on July 5.

A third missionary, Miracle Osman of Malawi, is working with Filipino attorneys on paperwork, and Global Ministries officials are hopeful she’ll be allowed to leave, said Dan Curran, a spokesman for the church agency.

All three faced accusations of anti-government activities. Chandiwana had been held by authorities for weeks, while the other two had not been allowed to leave the country.

Thomas Kemper, top executive of Global Ministries, said his heart had been “full of sorrow” when he met with Chandiwana at a detention center on July 1.

“Now it is full of joy because I’ve just said goodbye to him,” Kemper said from the Ninoy Aquino International Airport in Manila.

Manila Area Bishop Ciriaco Q. Francisco posted on Facebook: “Another round of thanks to God and to all who supported the release of Tawanda.”

In a video released by Global Ministries, Francisco added a special thanks for the life of Chandiwana, who he said had “lived with the people.”

“That is the real essence of service. He lived with the Lumads and he served the people,” Francisco said, referring to an indigenous people of the Philippines. 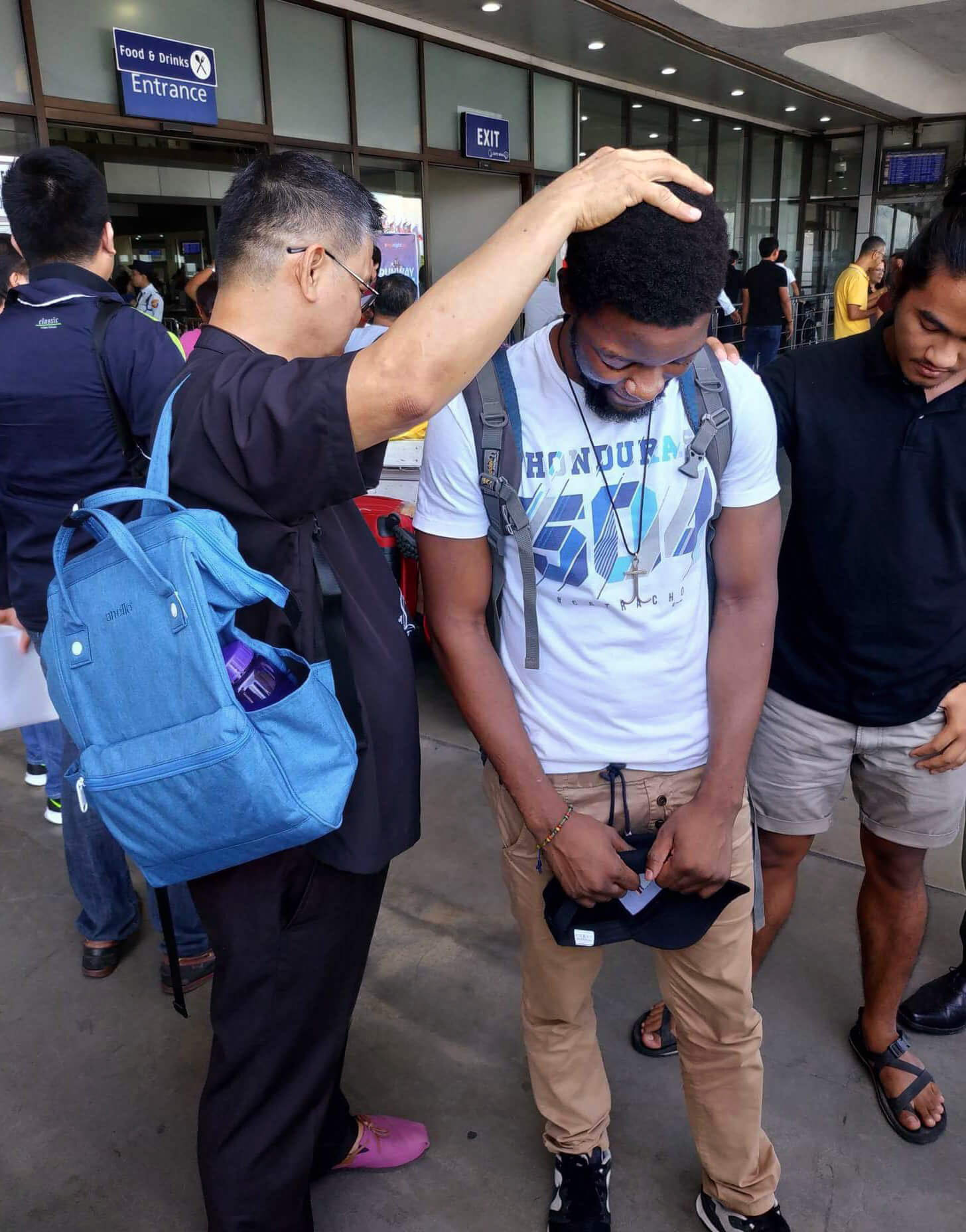 Bishop Ciriaco Q. Francisco (left) of the Manila Episcopal Area prays with Tawanda Chandiwana outside the Ninoy Aquino International Airport after the United Methodist missionary was released from a detention center and allowed to leave the Philippines. Photo by Mendoza Adrian.

Shaw reached Brunswick, Ohio, on July 4 and was reunited with his parents, the Rev. Thomas Shaw and Susan Shaw.

The father, pastor of Brunswick United Methodist Church, said the denomination’s support was “very, very important to know that Adam wasn’t alone and that we were not alone in supporting him.”

He added: “We’re happy for him but feel his sadness that he had to leave the country where God had called him.”

Adam Shaw urged people to continue to share the story of the missionaries in their churches and on social media.

“The Philippines is one of those countries where people of faith really have a voice and are listened to regardless of whether they are in the Philippines. . . .” he said. “Part of the effort in detaining us was to silence our voices and the voices of those we lift up in our work. Refusing to let the voices be silenced is a huge step that we as a church can do both through the petition and our churches.”

Global Ministries worked unsuccessfully behind the scenes then led a public campaign for the release of the three missionaries. The Council of Bishops issued a statement, and about 13,000 people signed an online petition.

Kemper described himself as “so, so thankful” for the denomination’s support.

The New York Times reported that Shaw was deported by the Philippines for having engaged in “political activities,” and another news source said the government’s Bureau of Immigration had placed all three missionaries on a blacklist because of “leftist” involvement.

But Global Ministries said the three were targeted for taking part in an international ecumenical fact-finding investigation of alleged human rights violations, including the deaths of nine indigenous people.

That mission was on the southern island of Mindanao, where President Rodrigo Duterte has declared martial law and the military has battled Islamic militants, the Times reported.

Chandiwana was arrested May 9 while attending a training seminar at the Mindanao Peacebuilding Institute. He was held on a charge related to his visa status, but also was found to be on a government watch list for suspected subversives.

Osman’s passport was confiscated as she was extending a tourist visa while waiting for her missionary visa to be approved, and Shaw had been informed that he would be deported, Global Ministries reported earlier. 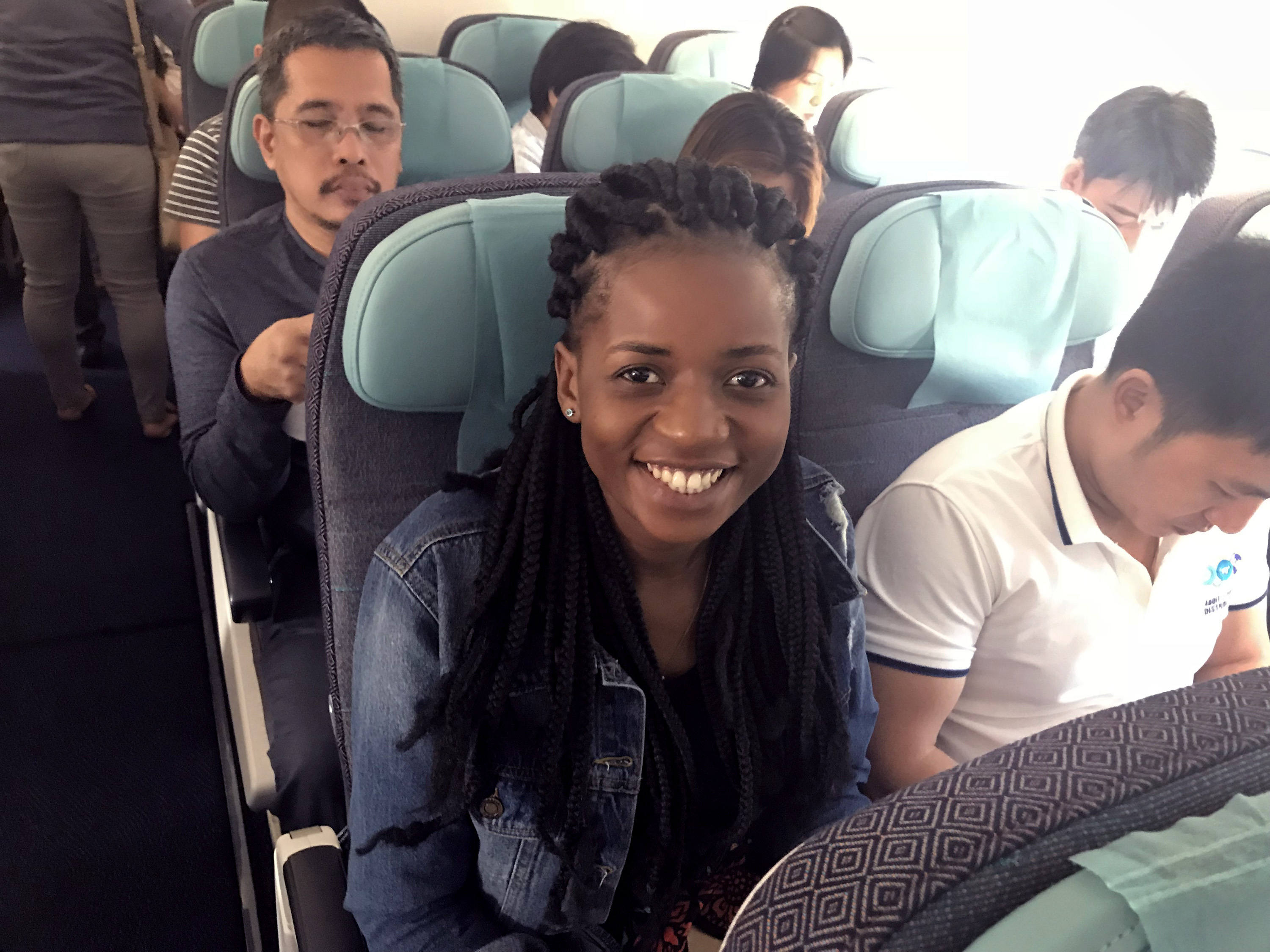 Miracle Osman smiles as she waits for her flight to depart from Davao to Manila. Osman is working with Filipino attorneys on paperwork to allow her to leave the Philippines. Photo by Mendoza Adrian.

Shaw was initially commissioned in 2011 as a mission intern. Lately he had been serving as an international linkages coordinator assigned to the Save Our Schools, Protect Indigenous Life Project, based in Davao City, Mindanao.

Kemper noted that missionaries are sent to take the Gospel of Jesus Christ to all parts of the world.

Adam Shaw, a missionary who was ordered to leave the Philippines, returned to the U.S. on July 4 and spoke about his sadness that he had to leave the country. Video courtesy of East Ohio Conference.

“That includes standing up for life where it has been threatened,” he said. “… So we will not stop sending missionaries to the Philippines, to all countries in the world, because we feel that is our calling as United Methodists.”

Manila Area Bishop Ciriaco Q. Francisco expressed his gratitude for the release of the missionaries. Video courtesy of Thomas Kemper.

Thomas Kemper, top executive of the United Methodist Board of Global Ministries, says the agency will not stop sending missionaries to carry the Gospel of Jesus Christ to the Philippines and other parts of the world. Video courtesy of Thomas Kemper./em>

Hodges is a Dallas-based writer for United Methodist News Service. Rick Wolcott, director of Communications for the East Ohio Conference, and Gladys Mangiduyos, a communicator from the Philippines, contributed to this story. Contact them at 615-742-5470 or [email protected]. To read more United Methodist news, subscribe to the free Daily or Weekly Digests

In times of scarcity and crisis, United Methodists and their neighbors find ways to share with the community.
Global Health