For United Methodist missionary Adam Shaw, being expelled from the Philippines will mean leaving an area that has felt like home.

“I think the cruelest part is that I can’t come back, and that is the most painful part for me,” Shaw said, during a July 2 press conference at Good Samaritan United Methodist Church.

Shaw, a United Methodist Global Ministries missionary, has been expelled by the Philippine government and will return to Ohio next week. Two other United Methodist missionaries—Tawanda Chandiwana, who is in a detention center, and Miracle Osman, who has had her passport confiscated—are still being detained. All three were labeled subversives by the government while taking part in an international ecumenical fact-finding investigation of alleged human rights violations, including the deaths of nine indigenous people.

Chandiwana was arrested and has been held in the Bicutan Detention Center since May 9. Osman’s passport was confiscated as she was extending a tourist visa while waiting for her missionary visa to be approved. The confiscation of her visa has made it impossible for her to leave the country voluntarily.

Speaking at the press conference, Thomas Kemper, top staff executive of Global Ministries, said the missionaries had come to the Philippines “to spread the word of God.” 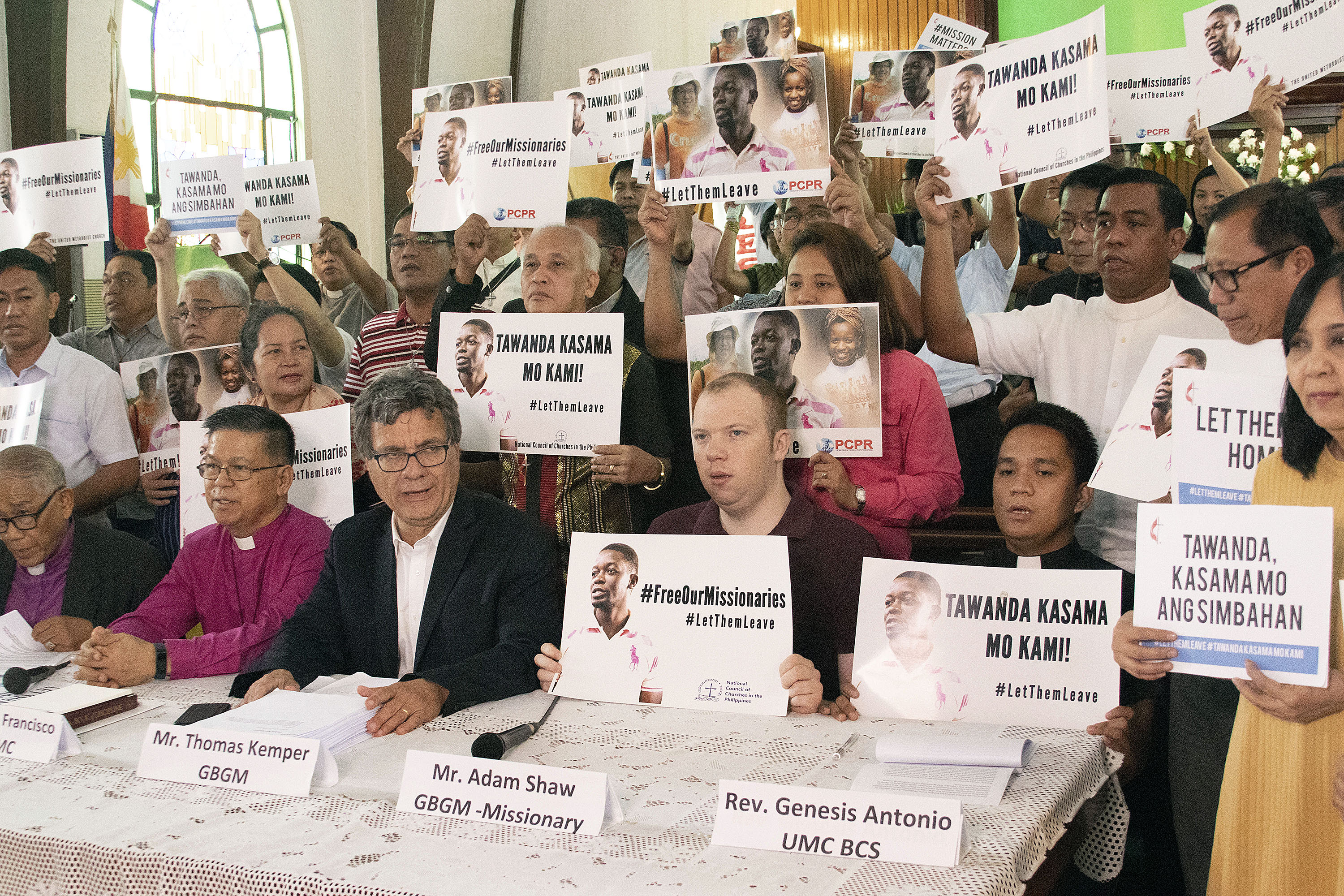 “To see that a young man from Zimbabwe who … was a youth leader in The United Methodist Church … is now in a detention center for almost two months is something we have to protest,” Kemper said, “and we have to ask the Philippine government to release him immediately and let our missionaries leave.”

Bishop Ciriaco Q. Francisco of the Manila Episcopal Area also spoke at the press conference on behalf of the missionaries.

"With all humility, we collectively bring our pleas to the throne of God, to help our missionaries, to grant them fair treatment, that their rights will not be violated," said the Rev. Igmedio Domingo, during a prayer and candle lighting ceremony held July 1 at Central United Methodist Church. Domingo is superintendent of the denomination’s Southwest Metro Manila District.

“We are not just praying with them, but we will stand to decry inhumane treatment, we will cry out for truth, justice, life with dignity (for) all those people, especially the lowly!" Domingo said.

When the three young people passed through government checkpoints in February, police flagged them for further scrutiny, and during the course of several months, their ministry came to a halt. In a tangle of red tape, officials insisted that the missionaries leave the country and never come back, while simultaneously preventing them from doing so.

Attorneys for the church said Shaw and Osman will soon see home soil, but their friend, Chandiwana, faces an uncertain future. 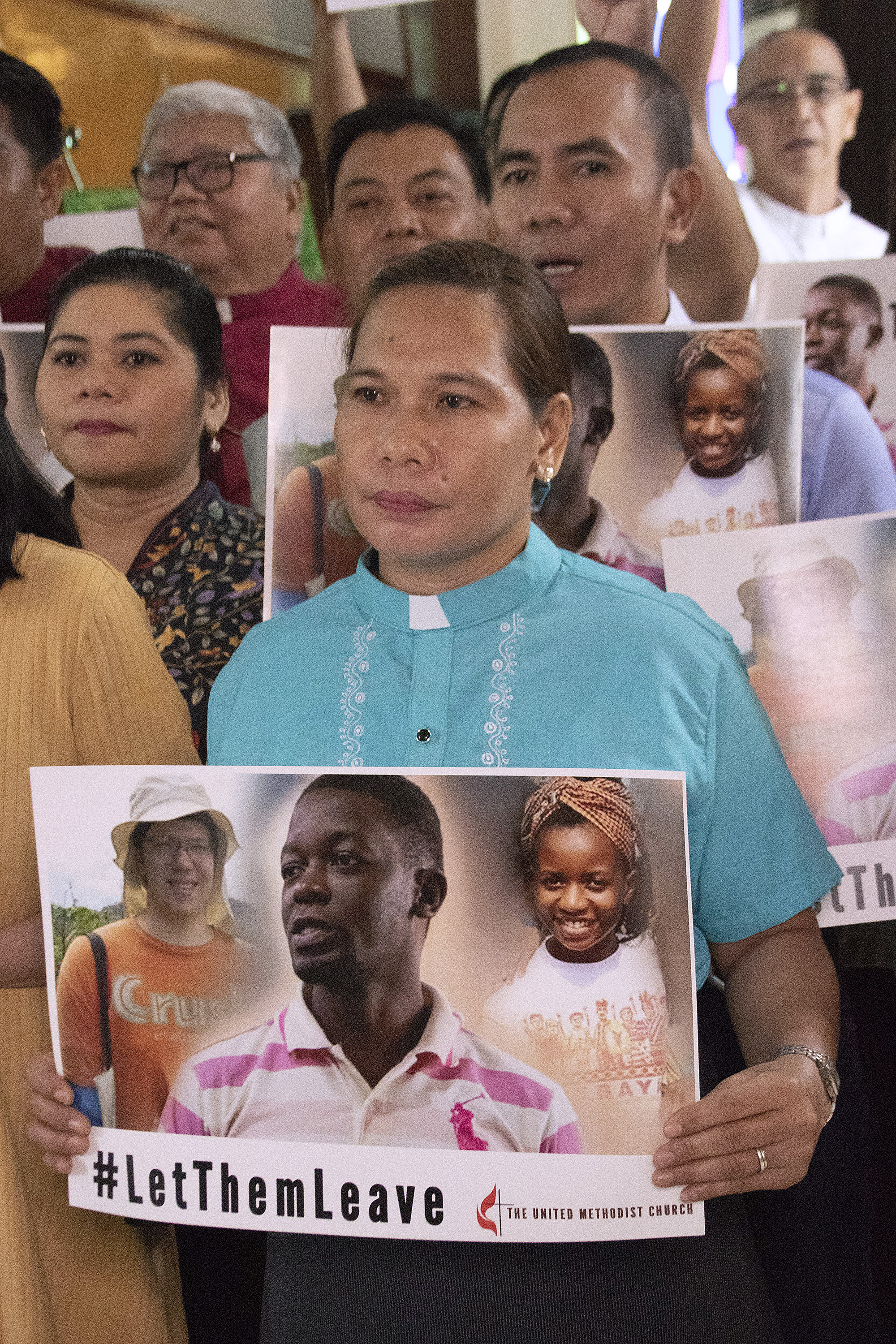 A clergywoman holds a poster seeking the release of detained missionaries Tawanda Chandiwana and Miracle Osman. A third missionary, Adam Shaw, was expelled and will return to Ohio. Photo by Jan Snider, UMCom.

Over the past two months, quiet diplomacy has not yielded results, so the church recently launched a public awareness campaign, Pray to #Let Them Leave. An online petition has garnered over 11,000 signatures worldwide.

Most major Filipino news organizations gathered at Good Samaritan United Methodist Church as church leaders and legal representatives pleaded with Philippine President Rodrigo Duterte to release Chandiwana and allow him to return home. Shaw says his quiet colleague would normally be uncomfortable with the international attention: “He likes to be in the background, behind the public view.”

Shaw said the island of Mindanao is where he feels most at home.

Shaw, 29, of Brunswick, Ohio, is the son of the Rev. Thomas and Susan Shaw, who were missionaries in Tunisia and Germany from 1994 through 2003.

Shaw said he discovered his adult-self in the Philippines. He first served as a mission intern and returned in 2017 as a missionary serving the Save Our Schools, Protect Indigenous Life project.  “I’m definitely leaving a lot of myself behind.”

But as tears washed across tired eyes, Shaw acknowledged that leaving his friend behind is even harder. His plans upon return to the U.S. are clear. “If Tawanda still has not been released, I will be advocating for him and waiting for my next missionary assignment.”

The three missionaries were assigned to InPeace (the full name is Initiatives for Peace), a grassroots, interfaith movement that describes itself as supporting sustained peace negotiations among those involved in armed conflict, with the view of achieving meaningful reforms from these talks to benefit the peoples of Mindanao.

Global Ministries has had a “long, long relationship of trust and mission collaboration with InPeace and has placed young adults there since 2006,” Kemper said. 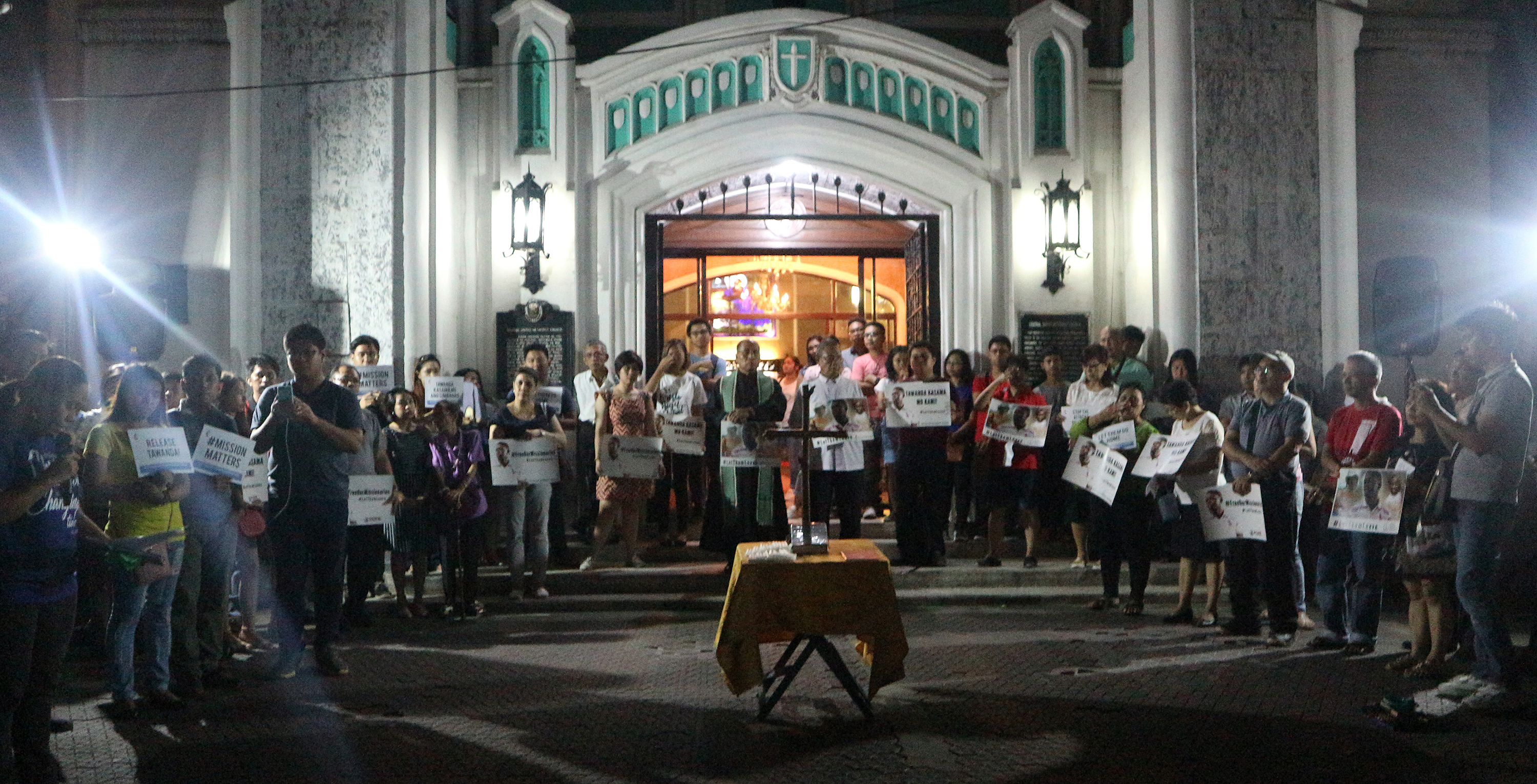 A crowd holds signs outside Central United Methodist Church in Manila in support of the missionaries from the United Methodist Board of Global Ministries. Photo courtesy of Johanna Dela Cruz, UMNews.

The harassment of the missionaries has been unacceptable, he added. “I think we have to stand up for rights and for human rights. It (the fact-finding) was not to take a political stand.”

The Council of Bishops has released a statement backing the episcopal leaders in the Philippines and requesting “assistance and cooperation in the immediate release of three of our missionaries from the country.”