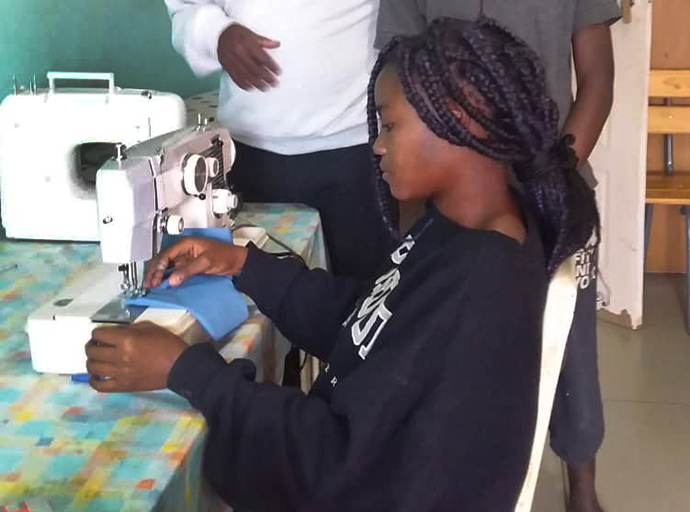 Winnet Mandikisi, 19, works at a sewing machine at Home of Hope, the orphanage at Nyadire United Methodist Mission in Mutoko, Zimbabwe. Mandikisi, a college student, has been leading efforts to teach fellow orphans how to make masks to fight against COVID-19. Photo by Chenayi Kumuterera, UM News.

College student Winnet Mandikisi, who spent her teenage years at The United Methodist Church’s Home of Hope orphanage, is using her skills to help children like her during the coronavirus pandemic. 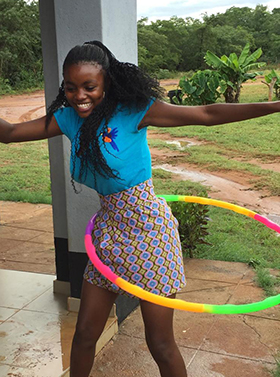 Nineteen-year-old Winnet Mandikisi, an orphan who spent her teenage years at The United Methodist Church’s Home of Hope, has fun with a hula hoop at Nyadire Mission in Mutoko, Zimbabwe. Mandikisi has been teaching orphans at the home how to make masks and sanitary pads while schools have been closed during the coronavirus pandemic. Photo by Chenayi Kumuterera, UM News.

Mandikisi, who is attending Tabudirira Training Center on a Sister Rut Lindgren scholarship — named for the late missionary nurse from Finland who helped start Home of Hope — has been leading efforts to teach fellow orphans how to make masks to fight against COVID-19.

“I spend most of my time teaching both boys and girls from 9 years and above, and some of the teachers at Nyadire Primary School, to make their own masks,” said 19-year-old Mandikisi, who is studying textile technology design with a focus on garment construction and patternmaking.

“Both of my parents died when l was too young. I never saw my father’s face. My mother passed away when I was 3 years old. I experienced abuses of different types until my schoolteacher become a source of my escape from these abuse predicaments,” Mandikisi said of her road to Home of Hope.

Helping during the COVID-19 pandemic — when schools are closed due to government lockdowns — has given Mandikisi a purpose. She also has been teaching girls at Home of Hope how to make their own sanitary pads.

Charity Horiro, Zimbabwe coordinator for the Nyadire Connection’s Girl Empowerment Pad program, said she met Mandikisi in 2015 when the group gave the girls at Home of Hope some kits to make sanitary pads.

“Winnet took the responsibility to train the girls at Home of Hope … She is really an asset because of her sewing skills (and) that has improved the lives of some girls as they used to miss lessons during their monthly periods,” Horiro said. 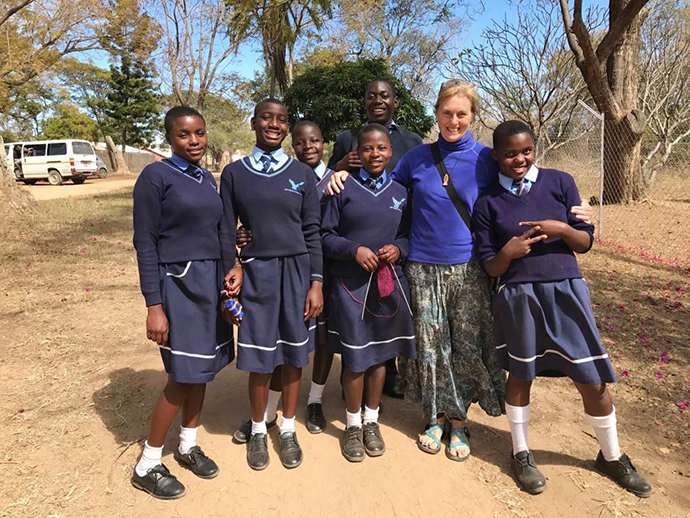 Bonnie Lawson, a member of the Western Pennsylvania Conference who helps coordinate the pad program for the Nyadire Connection, said there are many talented and creative people in Zimbabwe.

“Winnet is one of the women who rose to the challenge …. Life skills have been taught to students and some groups have expanded to making uniforms,” she said.

Lawson said the program started about nine years ago with one school.

“From the one primary school, we now provide (Girl Empowerment Pad) kits and educational material to seven primary schools and other groups at Nyadire Mission, which includes students from Home of Hope and the hearing-impaired school,” Lawson said.

Mandikisi is helping continue that mission, and many of those she helps train look up to her as a role model.

“Winnet is our Home of Hope big sister who cares (and) encourages us to not to give up and also to respect elders,” said 18-year-old Precious Muripo.

Kelvin Magirazi, 17, agreed, calling Mandikisi responsible and mature. He said she is helping to make sure every orphan has something to do with his or her life.

Mandikisi said she would like to expand on the sewing lessons down the road to help children at the orphanage make a living and empower others in the community.

Emmanuel Chiimba, Home of Hope administrator, said Mandikisi is gaining more skills in college that will help her and others in the future.

“Given enough material resources, Winnet can sew uniforms for early childhood development schools and primary schools,” Chiimba said. “Even though the economy and the continuous seasons of drought have brought challenges to the small farm at the Home of Hope, the children are still learning basic skills.”

To learn more about the Nyadire Connection and Home of Hope, or to become a sponsor for a child, visit http://www.nyadire.org.

Mandikisi said Chiimba has been a father figure and motivator to her since she came to the home in 2015. Chiimba fiercely advocates that children stay at the orphanage until each has the schooling, skills and moral values to survive.

“Even the children who have aged out still consider each other family and support each other in numerous ways. The Home of Hope is a vital part of the mission, embraced by the church, the schools and the hospital (at Nyadire Mission),” he said.

Mary Beth Zollars with the Nyadire Connection acts as a liaison between the children and their sponsors in the U.S. The home, which opened to its first four children in 1998, is the brainchild of Lindgren, who lived at Nyadire Mission for more than 35 years.

“It is hard to gauge exactly how many have benefited from the Home of Hope program since some of the children have had sponsors since Early Child Development and are now in the Sister Rut Scholarship Program attending university. … Our message is that education is something that can never be taken away,” Zollars said.

The Rev. Lancelot Mukundu, Nyadire Mission station chair, said Mandikisi’s story is motivating other orphans and the community as a whole.

“The award of the Sister Rut Lindgren scholarship has become an inspiration to other young girls and boys from the Home of Hope community (and) has also motivated many of our church members to help orphans,” he said.

Mandikisi is happy to be following her dreams and giving back at the same time.

“I want to be a professional clothes designer after my college training, like (the ones) I saw featured on television. I want to be self-employed (and be able to make) school uniforms for the mission schools, starting from early childhood development students to the primary level.”

Kumuterera is a communicator in Zimbabwe. News media contact: Vicki Brown at (615) 742-5470 or [email protected]. To read more United Methodist news, subscribe to the free Daily or Weekly Digests.