About 30 young people from neighboring countries Albania, Macedonia and Serbia gathered in the beautiful coastal area of Spille for the second United Methodist Regional Youth Camp.

The topic of the camp was “Being a Disciple of Christ,” and the participants heard from lecturers representing all three countries. They shared their understanding of what it means to be a disciple, and encouraged and challenged the youth to stay true to their faith in Jesus Christ.

From outside, the camp may look like any other. But as Serbia superintendent Daniel Sjanta explains, there’s more to this gathering than your typical camp.

“For decades, the region of the Balkans has been very turbulent and unstable,” Sjanta said. “Several new countries came into existence in the past 30 years, and there were several other attempts of creating new countries — which failed, but the bitterness and hostility remained. We all grew up with some prejudices, and with the notion that we are good, and the others are bad.” 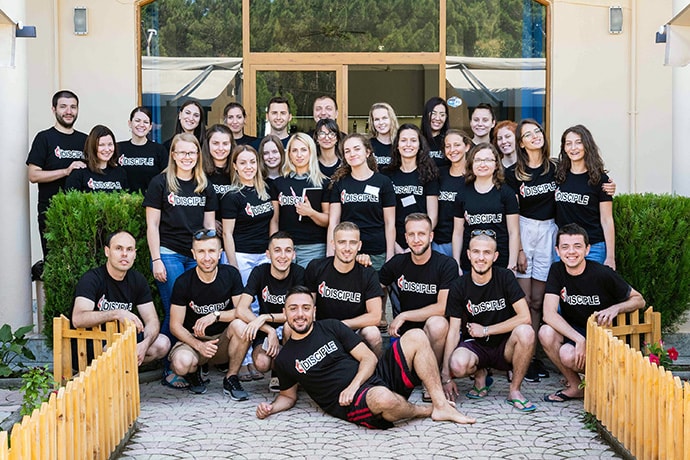 About 30 young people attended the second United Methodist Regional Youth Camp in the coastal area of Spille, Albania. The topic of the camp was “Being a Disciple of Christ,” and the participants heard from lecturers representing the three countries attending, Albania, Macedonia and Serbia. Photo by Danail Ristovski, Skopje/Macedonia.

Sjanta said that Methodists in the region have tried for years to work on overcoming those issues, and he believes the church is making a difference.

Four years ago, a similar camp was held on the Macedonian side of Lake Ohrid.

At the April 2019 meeting of the Serbia-Macedonia Annual Conference, it was decided that a third district would be added: Albania.

Sjanta said its creation was “an important step in the right direction.”

“We are now a very diverse conference, but we understand that our calling to be a disciple of Christ means that we follow Christ together as one church,” he said.

The camp in Albania was an attempt to overcome the political tensions and focus on Christ, but also on individuals. The young people came together, worshipped, swam, created crafts, talked, prayed for each other, played games and laughed well into the night.

Sjanta said there were many special moments during the camp, including a baptism and worship on the beach on the final day.

“First, there was the baptism of Aleksa, a young man from Serbia, who had expressed a desire to be baptized during the camp. Later that day, we came to the beach to watch the sunset, but it turned into a beach worship service, where we sat in a circle and praised the Lord, everybody singing songs in their own language.”

Sjanta said the camp was meaningful because he could see in the participants the developing and future leaders of the church “who are growing in faith together and who are not afraid of what the world is saying, but who listen to the voice of Jesus.”

Schweizer is assistant to the bishop for the Central and Southern Europe Episcopal Area in Zurich.

As the migration crisis continues, Europe “is becoming a fortress” where desperate people are being turned away, says a United Methodist pastor in Germany.
Evangelism

The newly dedicated Amani United Methodist Church is the 33rd church to be built in East Congo as part of Bishop Unda’s ‘Rise and Build’ campaign.