A program to educate and hone leadership skills in young women has been revived in Sierra Leone after United Methodist Discipleship Ministries donated $5,000 toward the cause.

“Thank God that the Young Women’s Network has resurrected,” said United Methodist Women's missionary Elmira Sellu during the May 2 opening ceremony at the 2019 Young Women’s Gathering in Yonibana in northern Sierra Leone. “We are here after six years and today we sing ‘He Arose from the Dead.’”

Sellu, speaking on the theme “A healthy woman builds a healthy society,” said that “women keep the church alive,” but can only do so if healthy.

“Health is a wholeness of well-being,” said Sellu, who acts as a mentor to the Young Women’s Network. “Physical, social, mental and emotional well-being combine to make a healthy person.

“Go and tell others,” she said.

The Young Women’s Network is a forum for young women of the Sierra Leone Conference who found it difficult to speak or interact freely with older women in the UMW in Sierra Leone. Traditionally in Sierra Leone, young people don’t talk when elders speak, especially on matters where they disagree.

The idea was warmly received and many young women registered with the group. The idea spread to Liberia and Nigeria, who were facing similar situations, and the network continued to grow in the West Africa Central Conference. There are now Young Women’s Desk Offices in Sierra Leone, Liberia, Nigeria and Côte d’Ivoire.

Every year, the Sierra Leone group met at a Young Women’s Gathering to share ideas and problems and pray together.

“But it was discontinued until now because of funding,” said Sylvanette Tawah, the new desk officer at the Youth and Young Adults’ Ministry and a past beneficiary of the Young Women’s Network.

She said the women receive training at the Young Women’s Network designed to help them forge better marriages and manage organizations.

“We are not limiting health to the physical health of the woman,” Tawah said. “There are a lot of other healthy behaviors that enhance the woman to build a healthy society.”

Examples include young women’s relationship with God and people in general, appropriate dress, comportment and integrity.

“All of that and our Christian moral standards are what we are going to be emphasizing,” Tawah said. 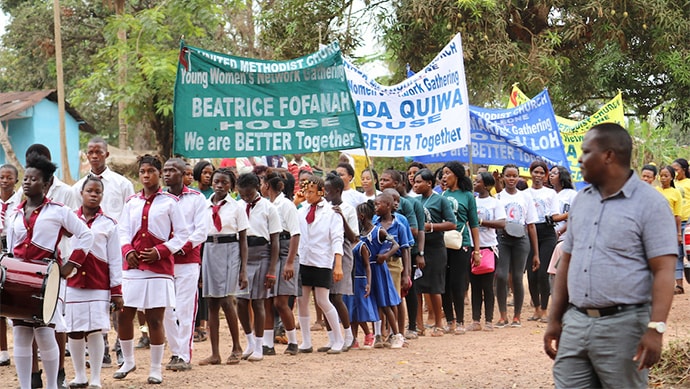 A May 2 march was held during the United Methodist Young Women's 2019 Gathering in Yonibana, Sierra Leone. The colors represent the houses they belong to and each house carries its banner. Photo by Phileas Jusu, UM News.
Rosaline Mcarthy, an academic and gender activist who spoke at the opening ceremony, said that Sierra Leone young women yearning for opportunities would make themselves relevant in a still-patriarchal society that discriminates against women, where domestic and other violence is rife and sexual abuse of minors was a huge problem.

In February, President Julius Maada of Sierra Leone declared rape a national emergency amid growing outrage over the rape of a 5-year-old girl.

Women need the appropriate skills to contribute to national debates on women’s empowerment and to fight the high illiteracy rate among women, Mcarthy said. Life skills such as assertiveness, communication, problem solving, critical thinking, negotiation, self-awareness and self-esteem are all important, she said.

Sexual violence — sometimes resulting in death — in the west African country has jumped dramatically in the past five years, making it a concern for the church and women’s groups. Hence, Mcarthy said that preparing young women on how to resist and prevent rape are part of the empowering process.

Finda Quiwa, a United Methodist Women’s missionary, expressed excitement that the dream to empower women has not died.

Juliet Tengbeh, a coordinator of the Young Women’s Network in Kailahun — a new United Methodist district in eastern Sierra Leone — appreciated the revival.

“I believe we are all going to leave here revived and we will go out into our communities and teach others of the good lessons we have learnt,” Tengbeh said.

Young women will learn how to build relationships and homes and how to revitalize churches to win more souls for Christ, she said. Membership fell in the past six years because of the lack of activity.

“I loved the session yesterday,” she said. “We were separated into three groups where we shared our problems and prayed over them. Everybody was free to speak out on the issues that bother us.”

The slayings of two Black clergywomen show the need for the church to loosen its bonds in order to respond, just as Jesus ordered Lazarus unbound after raising him from the dead.
Social Concerns

United Methodists receive and share Jesus' promise of abundant life even and especially in the face and aftermath of death.
Annual Conferences

Even as United Methodist conferences deal with mounting church exits and disagreements over LGBTQ inclusion, they are bearing a shared witness on gun violence. And they are urging actions beyond thoughts and prayers.