In the twittersphere, young adults are holy conferencing and dreaming of a better church in the aftermath of The United Methodist 2012 General Conference - all in 140 characters or less.

A tweetup to chat about the worldwide assembly happened May 14. More than 150 people came up with more than a thousand dreams for the future of the denomination.

Two young pastors under 35 organized the social media chat. They were Rev. Becca Clark, an ordained elder in the New England Annual (regional) Conference and pastor of Trinity United Methodist Church in Montpelier, Vt.; and the Rev. Jeremy Smith, an ordained elder in the Oklahoma Annual Conference and associate pastor of First United Methodist Church in Checotah, Okla.

Both Smith and Clark attended General Conference, and both had some positive and negative experiences.

Smith said #DreamUMC is a grassroots effort to engage young adults and others who felt disenfranchised by the actions/inaction of the denomination's top lawmaking body April 23-May 4 in Tampa, Fla. The next tweetup is scheduled at 9 p.m. EDT May 28.

"We heard a lot of doom and gloom at General Conference, and in the world at large, about the decline of the UMC and mainline Christianity in general, and how the church is no longer relevant to a 'new generation' of young people," Clark said. "DreamUMC proves that this is simply untrue." 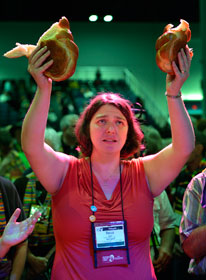 The Rev. Becca Clark participates in Communion May 3 during the 2012 General Conference as part of a protest demanding a more inclusive church. A UMNS photo by Paul Jeffrey.

Smith said he was surprised by the raw nature of the comments.

"There's still a lot of pain, confusion and dissonance even 10 days after General Conference. But there is also a lot of resilient hope that refuses to stop loving a church that in some areas seems out of touch with reality. This interplay of fidelity with accountability will be a dynamic part of young people's experience in the coming four years," he said.

Participants at the tweetup were asked three questions:

A compilation of responses are posted on DreamUMC's Facebook page.

The answers ranged from optimism to disappointment to love for the church.

Answers to the first question: What did you learn?

Answers to the second question: How or have your dreams for the church changed because of GC2012?

Answers to the third question: What can the church do to be your "dream church?"

Young clergy members take part in a question-and-answer session during the 2012 General Conference to express their concerns over young adults being excluded from discussions about proposed church restructuring. A UMNS photo by Mike DuBose.

"I was pleasantly surprised that many of the comments were not just generally passionate, but some pointedly prophetic, and many practical and doable as action moving forward (looking toward networking, deepening connections, or drafting proposals and perhaps future legislative actions)," Clark said.

Clark and Smith said they hope for more ethnic and geographic diversity in the May 28 and following tweetups.

"Expansion of outreach to young adults in the central conferences is a high priority, and we are committed to involving the worldwide UMC from the beginning, not just tagged onto the end," Smith said.

"Staying connected and focused keeps us practical and attentive to what can be done. I don't want to just talk about changing the church; I intend to do it!" Clark said.