The United Methodist Church is taking a page from the tech startup world, and the resulting initiative enables young adults to be leaders in ministry.

Called Spark12, it is an incubator for social justice ministries developed and implemented by young adults. It is one way the denomination is working to develop principled Christian leaders, one of four areas of focus adopted by the 2008 General Conference, the church's top legislative body.

The project allows young adults to take the lead in ministry, rather than fitting into existing projects or ministry models.

"This (initiative) empowers young adults and meets them where they are," said the Rev. April Casperson, admissions director at Methodist Theological School in Ohio.

According to Casperson, the project also enables young adults to be in ministry much sooner than expected. They need not wait until they've earned a degree from college or seminary to work on a ministry about which they are passionate.

The project is all about "connecting people with the resources to do something truly amazing," said the Rev. DJ del Rosario, executive for young adult ministry discernment and enlistment at the United Methodist Board of Higher Education and Ministry .

In many cases, he said, Spark12 will help young adults who have always had a passion for social justice ministry or are already working on an issue but are uncertain of what to do next.

The goal is to give them the resources to move forward.

The young adult team models itself on a company called TechStars, which secures seed money from investors and provides three months of intensive mentorship. At the program's start, company leaders can request investment funds to continue their work.

Casperson said Spark12 is not designed "to make money or a profit, but (rather) to develop sustainable ministry in the world."

Another program model to develop sustainable ministry, she said, is the denomination's Imagine No Malaria campaign, which is working to eliminate death and suffering from malaria through improved health infrastructure, research and treatment, public policy advocacy and health education. The campaign, which is part of United Methodist Communications, has reached more than $19 million of its $75 million fundraising goal.

Both del Rosario and Casperson say the nature of Spark12 is not to compete with existing initiatives but to generate new ministry and encourage collaboration among individuals, ministries and programs to achieve each project's goal based on its context for ministry. 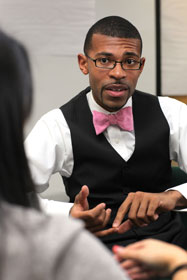 Theon Johnson III brainstorms with other members of the Spark12 team meeting in Nashville, Tenn. on January 18-20. UMNS photos by Kathleen Barry.

"This isn't about one agency or group," del Rosario said. "It has everything to do with getting the work done with the resources at hand."

Teams of one to three young adults ages 18 to 35 will submit ministry proposals to an executive design team that includes Casperson, del Rosario, Patrick Scriven of the Pacific Northwest Annual (regional) Conference, and Joe Kim of the United Methodist Board of Church and Society, as well as representatives from general agencies, profit and nonprofit advisers and young adults. The design team will determine which ministries they will fund during each cycle.

"Eighteen weeks is just long enough for a young adult to take a semester off (from college or seminary) without penalty and long enough to get a foothold in a project," Casperson said. Spark12 "is meant to be a catalyst - (to) create a good, solid foundation."

The projects must be innovative, with a social justice focus. The motivation must be the team members' response to their faith and the belief that God is calling them to undertake the ministry. Team members need not be candidates for ordained ministry.

Regarding the types of programs to be funded, Casperson said the design team has left that "deliberately open and deliberately vague" because they don't want to limit ideas.

"The goal is making a difference in the world," Casperson said. "The focus is to do something truly sustainable."

Del Rosario cited several projects as examples of the caliber of ministries the team hopes to fund. One is the Polaris Project, a U.S. organization that fights human trafficking. Its founders are two Brown University students. Another is Ambatana Threads, a handmade-clothing business that employs the business skills and creative ideas of refugee women.

During the launch period, a theological and spiritual leader will help team members "discern where God is in the midst of their work and how they are becoming co-creators in the transformation of the world," Casperson said.

For guidance and support, team members also will have access to coaches, professionals and technical experts within their project's ministry field.

At the end of the 18 weeks, representatives from the teams will go before the reviewing committee to make a case for continued funding so their ministries can be sustained long term.

According to del Rosario, "sustainable" can mean several things. An existing group might fold a project into its ministry. The project might go forward on its own with the original team members and perhaps others. Team members might collaborate with other groups or agencies to continue the project.

Del Rosario said he even envisions encouraging team members to join an existing ministry, such as the US-2 Program - a domestic, two-year, faith- and justice-centered mission and service program for adults ages 20 to 30 - instead of continuing with their proposed ministry.

The goal, he said, is developing Christian leaders. 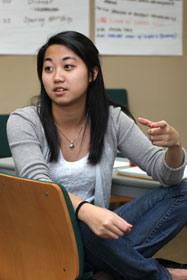 New way to do ministry

Aydin Ghajar said applying this model in the social service sector is long overdue. As chief executive officer of Thinkfuse, a tech start-up funded by TechStars, he has experienced the benefit of this model.

He said he is investing in Spark12 because he wants to support "new ideas and innovation in the nonprofit industry."

The return on investment is impact. "Anybody doing investment in philanthropic ventures wants to see their money have an impact," he said.

Ghajar hopes funded projects will be entrepreneurial ideas he never would have imagined. "I want to be surprised," he said.

The program will not belong to one group or agency. "It needs to be something the entire church is about," del Rosario said.

The nature and context of the ministries chosen for funding will determine which groups and individuals help the teams throughout the launch period and into sustainability. The pool of professionals will go "beyond church leaders to high-end executives," del Rosario said.

What remains consistent is the theological coach, who is "invested in the focus of developing principled Christian leaders," according to del Rosario. He said the coach - lay or clergy - should be "someone with a strong theological understanding of what this is all about: God's justice."

The Spark12 website launched on Jan. 21. Applications will be available on April 1, 2012. The first program cycle begins January 6, 2013. Del Rosario said he would like Spark12 to fund six pilot programs per cycle.

The team has secured initial investments totaling $175,000 from the Leadership Table, boards of Higher Education and Ministry and Church and Society, and individual investors. Other agencies have committed staff and resources.

In addition to its website the team will advertise the project through diverse channels so young adults and potential investors who may not be well connected to church groups can learn about the opportunity.

More information is available by emailing Casperson and del Rosario at [email protected].

*Parham is a freelance writer, editor and communications consultant based in Apopka, Fla.