I recently had coffee with a United Methodist clergywoman worn bone-weary from battling the people in her congregation. Appointed there last summer, she described an ongoing struggle between a new pastor full of ideas and a congregation fearful of change.

Yet, it wasn't managing institutional change that discouraged her. Rather, she was stunned to discover that some members were kicking up a fuss at having a woman as pastor, and that several laywomen were leading the uprising.

Not a week later, I was in conversation with a group of laywomen whose pastor - a woman - peppered her last sermon with derisive references to the "old-fashioned, fussy women's organizations, like United Methodist Women." The laywomen were hurt that this clergywoman seemed unaware (or unappreciative) of generations of UMW and forerunner agencies, whose advocacy and action helped open doors and break through glass ceilings for women clergy.

The national theme for Women's History Month 2013 is "Celebrating Women in Science, Technology, Engineering and Math." (Contact the United Methodist Commission on the Status and Role of Women for free, downloadable worship resources.) This theme got me thinking about interdependence. In the world of biology and environmental science, interdependence implies that each part of creation is vital and dependent on other created entities to make the planet work well. Plants provide oxygen for humans and animals. Rainwater from the sky nourishes living things to grow and thrive. The land feeds us and offers space to live.

'I need you to survive'

And so it is with we whom God created, including women of the church. We are interdependent. The world works best when we interact with respect and reverence for one another. The interdependence among God's people is summed up in the words of Hezekiah Walker's gospel ballad, "I Need You to Survive."

God calls Christian laywomen and clergywomen, like all Christians, to model the biblical reality that each of us has gifts. God calls all of us to bring those gifts - and God's people - together. Our ministries and our message suffer when degenerated into misogynistic clichs of backbiting and catfighting. 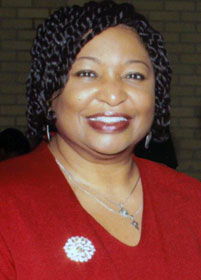 The good news is that many, many women do know how to work together well, across lines of status, class and calling, and there are sisters in The United Methodist Church who model interdependence at its best.

Signs of hope are evident among sisters in the Philippines and many parts of Africa. I recently attended the largest-ever gatherings of United Methodist clergywomen from Africa and the Philippines - with more than 300 women clergy and seminarians attending in each region. Several women clerics from the South Congo Annual (regional) Conference rose to thank then-laywoman Muginea Kainda, who made it her mission to send as many South Congolese clergywomen as possible to the event by spreading the word and soliciting funds from annual conferences.

In the Philippines, I talked to deaconesses and several laywomen volunteers who had agreed to preach, teach and visit sick congregants, so that their sister-pastors could attend the clergywomen's consultation. (The United Methodist Board of Higher Education and Ministry sponsored recent regional gatherings of women in Africa, Europe and the Philippines conferences).

The experience was especially meaningful for one Filipino laywoman who visited a parishioner in the hospital. She told me, "I feel a special call to support my pastor, who is a woman. Together, clergywomen and laywomen will change the world!"

'A threefold cord is not quickly broken'

Ecclesiastes 4:12 reminds us, "And though one might prevail against another, two will withstand one. A threefold cord is not quickly broken."

I have a poster in my office that reads, "God has given us bread, wine and one another."

The meaning of both bits of wisdom is clear: when we stand together with each other and with the God who creates and sends us forth, we can accomplish much more good than may be accomplished when we strive against one another.

Justice and equal access for women - lay and clergy, in church and society - have yet to be fully realized. Our goal of nurturing disciples of Jesus Christ for the transformation of the world will not happen until and unless women can strive together. It doesn't mean individuals won't disagree or that all of us will think alike or act alike. However, when we learn to respect and revere our interdependence as sisters in Christ, we will move the church and the world that much closer to valuing respect and justice for all women in all places.

A threefold cord is not easily broken. Together, with God nudging us forward, laywomen and clergywomen, young women and old women, poor women and rich women who are willing to transcend petty squabbles and turf-tending will change the world.