Francesco di Bernardone was the kind of rebel a teenager could admire.

He dressed oddly, spent much of his time alone and quarreled with his father.

His father eventually brought him before the local religious authorities, accusing the 25-year-old Francesco of shirking his responsibilities.

In one of his first public acts, the young man stripped naked, placed his clothes at the feet of his wealthy cloth merchant father and renounced his parentage. From now on, he said, he had no father but God.

Not exactly what you expect of the namesake for the current pope.

Yet, the man Christians around the world celebrate today as St. Francis of Assisi is likely the most popular saint outside the Bible.

Such renown is no surprise to the Rev. Brent Laytham, a United Methodist elder and dean and professor of theology at the Ecumenical Institute of Theology at St. Mary's Seminary and University in Baltimore. St. Mary's is the oldest Catholic seminary in the United States.

The reformer did so much more than inspire countless birdbath statues, Laytham said. For centuries, he has influenced Christian ministry with the poor as well as ideas about preaching, peace and, of course, pets.

He also offered a radical illustration for what it means to follow Christ, Laytham and other church leaders said.

"His life is a great example and motivation that we need to find that path of faithfulness in our own day," Laytham said.

How St. Francis influences one congregation

Saint Francis United Methodist Church in Charlotte, N.C., founded in 1989, on its website notes that the congregation, like the saint, grew up on "the dangerous side of town."

The church of about 600 members is in the rich part of the city. And like the young Francis did, its parishioners have faced the temptations of greed and idolatry.

"We choose our name in part, hoping that, like (Francis), we and our children - by clinging closely and passionately to Jesus - might escape the dangers of what wealth we have, and grow to proper children of God," the church's website says.

The church continues to follow Francis' example in its commitment to ministry with the sick and hungry, and in its vision statement, say church leaders.

"We seek to be an inviting, Christ-centered community identified by compassion and Christian love; devoted to spiritual growth and providing refuge from the clamor of the world," says the church's vision statement.

Ministry with the poor

Pope Francis has won international praise for striving to emulate the saint's humility. Since his election in 2013, the pope has made headlines for washing the feet of women prisoners on Holy Thursday and breaking bread at an Assisi, Italy, soup kitchen.

His namesake was known throughout his ministry for rejection of material wealth and close association with people Jesus identified as "the least of these."

But Francis, who lived from around 1181 to 1226, easily could have chosen a life of soft beds and stylish clothes.

He grew up a member of his day's nouveau riche. The world of business left its mark on him during his earliest days. He was baptized Giovanni (for John the Baptist), but his father changed the boy's name to Francesco after a successful business trip to France.

By all accounts, Francis led a dissolute youth preoccupied with social status. But that all began to change after he was taken prisoner in 1202 during a war between Assisi and neighboring Perugia. He returned to freedom seriously ill and contemplating his future.

He lived when the pope commanded an army, and princes of the church could live like kings. But during his recovery, as he later recounted, a dream urged him "to follow the Master, not the man."

He turned to prayer, penance and alms-giving. One day while praying, he said, God called him to "repair my house." So, in 1206, he sold some valuable cloth from his family store to rebuild the run-down chapel of San Damiano. That led his father to drag the young man before the religious authorities. Francis' break with his family was final.

After repudiating his inheritance, Francis became a friar who showed complete trust that God would provide for his needs.

He slept on the ground and eventually made his home in an abandoned church. He wore a dingy tunic, a rope for a belt and no shoes. He tended to lepers, made friends with social outcasts and embraced a life of no possessions.

"He thought the ideal Christian life to be one in which nothing at all is owned by anyone," Griffiths said. "That's a radical political vision, so radical that I doubt we're prepared even to think about it, much less to act on it."

Francis, however, soon attracted like-minded brothers. By 1208, Francis and his followers had reached the very biblical number of 12.

To join Francis' group, a man had to follow Jesus' call to sell all his goods, give his money to the poor and sever family ties.

How did Francis persuade so many young men to give up so much? Laytham of St. Mary's Seminary said Francis was a compelling preacher.

"And of course preaching has been at the very core of who we are as a people," Laytham said, "With John Wesley's field preaching and the circuit riders, preaching's been crucial to us. I think Francis is a great reminder that preaching matters."

In his own quirky way, Francis was an effective evangelist. He not only spoke about the Gospels. He made animal sounds, he danced and he played the zither.

"He was courteous, genial, extroverted — he was fun, a quality not always found in saints — and he laid it upon the brothers, as a duty, to be cheerful," writes Joan Acocella in a New Yorker review of books about the saint.

He also evidently was a master of the sermon illustration. Tradition holds that before delivering a Christmas homily in the town of Greccio, Italy, Francis organized the first living Nativity scene. He used the scene to demonstrate the humble birth of the King of Kings.

Thanks in part to his preaching and personality, his message spread. Before he died at 44, his brothers numbered in the thousands and were working across Europe. He had also inspired Clare, an aristocratic woman in Assisi, to give up her wealth and found the community of women known today as "the Poor Clares."

But perhaps Francis' most audacious move came in 1219. Francis and a dozen other friars traveled to Egypt during the fifth Crusade to try to convert the sultan to Christianity. Francis managed to make it through the battle lines to meet al-Malik al-Kamil, the leader of Egypt, Syria and Palestine.

The two had a cordial conversation. But the sultan was just as committed to his faith and Francis was to his.

Francis also met with Christians, including Cardinal Pelagio Galvani, the leader of the Crusade. Still, the war continued.

Griffiths said Francis' journey had two motives — to convert Muslims and to seek his own martyrdom. "There's no good evidence that he was what we would call a pacifist," Griffiths said.

While Francis survived the Holy Land trip, the journey most likely shortened his life. He returned to Italy with malaria and a painful eye infection.

Francis also most likely did not write the famous prayer that bears his name and begins "Lord, make me an instrument of Thy peace." The earliest record of the prayer dates to 1912 in France.

Still, Laytham sees in Francis' efforts a source of comfort for those trying to be peacemakers today.

"Most of us who are committed to peace have been failing," he said. "In one sense, Jesus creates our peace precisely out of an event that looks like a failure — Crucifixion. In the end, Jesus is the one who brings peace." 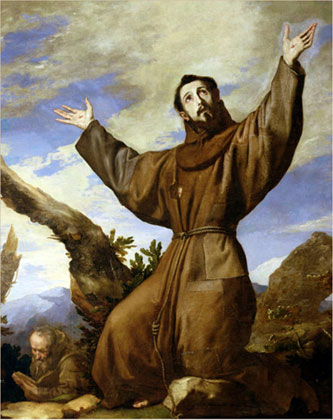 St. Francis has been widely painted in prayer and blessing animals. This oil painting by Jusepe de Ribera was created in 1642 and is titled "Saint Francis of Assisi in Ecstasy." A web-only photo courtesy of Wikipedia.

Francis is most widely known for his celebration of God's creation. Easily his most famous writing was "Canticle of the Sun." The prayer is the inspiration for the hymn "All Creatures of Our God and King," No. 62 in the United Methodist Hymnal.

Stories abound of Francis' kindness to animals. He preached to birds. He brokered peace between a village and a hungry wolf.

"He rescued a pheasant from a hunter, fish from a fisherman, dogs from cruel owners and taught people through all the ages how they should be kind to animals and protect them from harm," said the Rev. Arthur D. Thomas, an elder and recent adjunct professor of the history of spirituality at United Methodist-related Wesley Theological Seminary in Washington.

The saint remains popular in part because he is such a tough act to follow, church leaders say.

He "inspires us to do more than we think we can do for Christ," Thomas said.

"While Protestants are not called to become friars and embrace poverty to do so, they are moved by one who depended on God by faith and lived with such a simple lifestyle to accomplish so much for the 'least of these' in society."

Editor's Note: This story was originally published on October 26, 2013.