But, a year after the U.S. Supreme Court upheld the Patient Protection and Affordable Care Act, U.S. annual (regional) conferences still are grappling with how best to make use of the reforms.

Much will depend on the extent that conferences can use the online insurance marketplaces, which are scheduled to open for enrollment by Oct. 1. The options on the marketplaces are just starting to become public.

"Some conferences are seriously considering allowing covered lay workers and some covered clergy to opt out of the conference plan, essentially by allowing their local churches to opt out, ... to seek coverage on the exchanges," said Andrew Q. Hendren, associate general counsel at the United Methodist Board of Pension and Health Benefits. He is the agency's expert on the Affordable Care Act.

But, to take advantage of the marketplaces, church benefits officers face a number of questions, including one that is distinctly United Methodist and that awaits an Internal Revenue Service ruling.

In the connectional system of Methodism, who counts as the clergy's employer? Is it the church or ministry where a clergy member is appointed or is it the clergy member's conference?

If the answer is the local church or extension ministry, then many clergy can shop in the insurance marketplaces and potentially qualify for federal subsidies. If the conference is the employer, then the conference likely will be on the hook for providing insurance benefits for clergy under the Affordable Care Act's large-employer rules.

Hendren and others are quick to point out other questions remain about the new marketplaces. Chief among them is what insurance options will be available and at what prices.

For now, Hendren advises conferences "to take a cautious approach."

At least one conference - Florida - plans to take the leap, sending lay local church employees onto the insurance marketplace next year.

In The United Methodist Church, conferences historically have had the primary responsibility for sponsoring or participating in a group health plan that covers full-time clergy and lay employees in the United States.

Local churches generally contribute to the health benefits of their pastor and other workers through apportionment payments, direct bills or a combination of the two. Church law, however, does not require health coverage for lay workers who are not employees of the annual conference.

Conferences devote about a quarter of their revenue each year to health plan benefits, according to the pension board. Conferences also frequently use substantial time at their annual sessions to discuss health benefits and concern about their escalating costs. Some United Methodist benefits officers hope that could be changing.

"It's a fascinating place to be working because it's so complex and completely different from what we're doing now," said Lonnie Chafin, the Northern Illinois Annual (regional) Conference's treasurer. "But the potential is still huge."

If more church employees can rely on the insurance marketplaces for benefits, he predicts that local churches in his conference will be able to afford to have more clergy appointed. 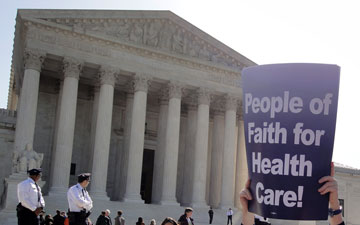 A demonstrator holds a sign in front of the U.S. Supreme Court in favor of the U.S. healthcare legislation, which the court upheld last year. A 2012 file photo by Michelle Whittaker/ United Methodist Board of Church and Society.

Here's how the marketplaces - also called exchanges - are intended to work. The law requires all 50 states and the District of Columbia to have health insurance marketplaces where people without insurance through their employer or some other program like Medicare can buy coverage from an array of private plans. The federal government will establish the marketplace in states that do not set up their own.

All insurance plans - whether in the marketplaces or not - must meet certain standards, such as selling coverage to everyone regardless of pre-existing conditions. New insurance policies will be mandated to cover preventive health measures without any cost-sharing from the patient.

Because these new marketplaces can pool large groups of people, the expectation is that the insurance options will be more affordable than what individuals or small businesses now can buy.

The federal government also will provide subsidies for individuals and families in the insurance marketplaces whose household income is between 100 percent and 400 percent of the federal poverty line. That translates to annual income between $11,500 and $46,000 for an individual or between $23,500 and $94,000 for a family of four. Amounts designated for housing or the rental value of parsonages are not included in calculating income, Chafin said.

For example, Chafin said, in the Northern Illinois Conference, 90 percent of the clergy would qualify for subsidies on the insurance exchange if the clergy member's salary is the only source of family income.

"The difference between qualifying for (subsidies) and not is clergy spouse income," Chafin said.

The marketplaces will not be an option for everyone. Employees must continue with their employer plan if the cost for their individual plan is less than 9.5 percent of household income.

The law also will require companies - including nonprofits - with 50 or more full-time employees to provide health care insurance just as most do now. The Obama Administration announced July 2 that it would delay penalizing companies that violate the "large-employer mandate" until 2015.

However, Hendren noted, most United Methodist congregations have fewer than 50 employees. And it might be less costly to both the churches themselves and individual employees to use the marketplaces.

Chafin said he sees the possibility that more lay people will be able to pursue a calling to work at local churches since they'll be able to get health benefits elsewhere.

The United Methodist Church has about 14,800 retired clergy, and 31,760 active clergy in the United States. Most conferences require that full-time clergy be covered by the conference health plan.

The Book of Discipline, the denomination's law book, asserts that clergy are not employees of a local church, district or conference. Their ministry is derived from Christ.

Church law also recognizes that for purposes of taxation, insurance and other benefits, governmental agencies may classify clergy as employees. The paragraph just does not specify what church entity is the employer, and the employer can vary depending on the circumstances. For example, clergy are self-employed for employment tax purposes.

The IRS applies a "common-law test of employment" to determine who the employer is under the health care law, Hendren said. The common law test examines numerous factors, including who provides a place of work, pays the salary, provides benefits, pays for work supplies and has the ability to terminate employment.

"Though many factors point to the local church or the charge conference being the employer for this purpose, the appointment and removal powers of the annual conference leave some ambiguity for elders and local pastors," Hendren said. "The local church is arguably more clearly the employer of deacons under the rule."

Hendren and other United Methodist leaders are working with the IRS to resolve the issue.

The United Methodist Board of Pension and Health Benefits joined with benefit boards of other denominations in urging the IRS to apply the employment "shared-responsibility" rule at the local church level in all denominations.

"We hope that the IRS adopts that suggestion in a published final rule later this year," Hendren said.

The delay in enforcing the "large-employer" health insurance rule gives the IRS more time to respond.

Another related question still is being worked out, Chafin said. That is whether conferences and local churches will be able to continue to distinguish between clergy and lay workers in what benefits they offer or whether the new law's nondiscrimination rules will require that if you offer health benefits to one class of employees, those benefits must be offered to all.

What we know about the exchanges so far

The premium rates on state marketplaces are just becoming known.

The Washington Post reported in May that California has unveiled likely rates on its exchange that are lower than expected. On average, the newspaper reported, a person who chooses a mid-level plan can expect to pay around $321 a month, about $100 less than the amount projected by the Congressional Budget Office.

In the near future, he said, United Methodist annual conferences may be able to reduce health coverage costs by allowing local churches to send lower-paid clergy and lay employees to the exchanges.

However, Hendren warns that conferences also should be wary of sending too many church employees onto the exchanges or they may have too small a pool of people to buy affordable insurance.

"The conferences will have to balance that potential savings with the risk to the remaining smaller plan made up of a few large churches and small churches with higher paid clergy and lay employees," he said. "The smaller plan may be less cost-effective, and appointment frictions may develop as local churches may prefer premium tax-credit-eligible clergy over higher paid clergy - two concerns in a connectional system like ours."