Bishop Rosemarie Wenner grew up in a United Methodist congregation so small that she was the only member of her confirmation class.

But the 50 or so members of that church in Eppingen, a village in southwestern Germany near the border with France, also made her feel welcome, even though most were the age of her parents.

"I was, from the very beginning, part of the church community," she told United Methodist News Service.

Now 56, Wenner is not only the episcopal leader of of Germany's three United Methodist annual conferences, but also the new president of the denomination's Council of Bishops. Bishop Larry M. Goodpaster, the council's immediate past president, passed the gavel to her for a two-year term during an April 26 ceremony as the 2012 General Conference met in Tampa.

In confirmation class, her pastor had engaged her in theological discussion. So when she began to consider a career path at the age of 17, that background and her faith in Jesus Christ led Wenner to consider the ministry.

She hesitated, though, because she knew of only one female United Methodist pastor in Germany at that time. "I was not sure the church would accept me," she recalled. 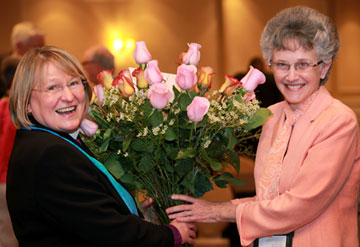 Bishop Wenner (left) receives roses from Bishop Peggy Johnson of the Philadelphia Area in congratulations of becoming the new president of the Council of Bishops.

Finally, Wenner decided to take "stepping stones" to determine whether it was God's will that she be a pastor.

In the Germany conference, that meant starting with a year in a local church, then theological education. She studied at the United Methodist Theological Seminary in Reutlingen, was ordained in 1982, and served as pastor of congregations in Karlsruhe-Durlach, Hockenheim and Darmstadt-Sprendlingen before her appointment as superintendent of the Frankfurt District in 1996.

When she was elected bishop of Germany in February 2005, Wenner became the denomination's first woman to be named to the episcopacy outside the United States. In 2008, the Rev. Joaquina Filipe Nhanala was elected in Mozambique as the first female bishop for Africa and Wenner was re-elected that November for an eight-year term.

The United Methodist Church in Germany is so small - only 60,000 out of 80 million people - that it doesn't even register as a percentage of religious believers in a country where Lutherans, Roman Catholics and the Reformed church dominates.

But, Wenner explained, United Methodists are known for their ecumenical witness, which includes involvement in the German and European council of churches. "Sometimes, we have to remind the bigger partners that we want to cooperate," she added.

"The ecumenical work [in Germany] is a natural thing for us."

"The size of the church gave me many possibilities for ministry."

"In Germany, the first step into the ordained ministry is a practical year in a local church."

She considers the reunification of Germany after the fall of the Berlin Wall to be "one of the gifts from God." The United Methodist Church in East Germany is still quite strong, she noted, despite economic struggles. But even before the wall came down, the work of East German United Methodists demonstrated the church of Jesus Christ "is not dependent on the political environment," Wenner said.

The bishop and her husband, Tobias Wenner, a software engineer, live in Nussloch. She said she depends upon him to keep her informed about what is happening outside the church. "I appreciate that he supports me in my ministry."

She's also appreciative of the denomination's recognition of women's ministry and the work of the United Methodist Commission on the Status and Role of Women.

But that recognition is not universal, Wenner said, noting that some in Germany still say the Bible does not support leadership by women. "We have to explain that we are called by God and how we experience how we are called."