That fact was demonstrated time and again as the minute-by-minute actions of the 2012 United Methodist General Conference April 24-May 4 were watched by thousands online and tweeted, posted on Facebook or spread through other social media platforms.

While some participants in the denomination's top legislative body, like 11-time lay delegate Ruth Daugherty, remembered a time before electronic keypad voting, when delegates were asked to stand so pages could take a vote count, Hannah Adair Bonner was excited to be connecting instantly with other young church members.

"Over and over we hear that technology is changing our lives, but never has it felt more real to me than this," she wrote in a blog post. "For the first time, I understand in an experiential way how the Arab Spring took place.

"When young people can dialogue about what they are watching - whether in their neighborhood or on their computer screen - it changes the conversation and transforms their level of engagement."

A joint project of United Methodist News Service and the MethoBlog, www.gc2012conversations.com, where news and opinion was posted, was visited by almost 80,000 unique visitors, serving up more than 450,000 page views over a two-week period, according to coordinator the Rev. Jay Voorhees. Nearly 2,500 comments came in from persons throughout the world.

During Week Two, the issue receiving the most chatter, at least by General Conference participants, was the rise and fall of proposed denominational restructuring plans. On May 2, delegates gave tentative approval to a slightly amended version of "Plan UMC" to reconfigure general agencies and downsize their boards.

Two days later, the United Methodist Judicial Council declared Plan UMC to be unconstitutional, causing an uproar on the conference floor. The top court said General Conference gave away too much of its authority under the plan.

The council also ruled invalid an attempt to shift the funding of financial support for U.S. bishops to the five jurisdictions. Two Africans — the Rev. J. Kabamba Kiboko from Southern Congo, currently a clergy member of the Texas Annual (regional) Conference, and N. Oswald Tweh Sr., a lawyer from Liberia — were elected April 30 to serve on the 2012-16 Judicial Council.

When General Conference reconvened May 4 for the final evening session, delegates debated various motions to refer the Plan UMC restructure plan back to the Council of Bishops and Connectional Table to be crafted for consideration at the 2016 General Conference in Portland, Ore., but finally tabled the whole idea and moved on to other legislation. 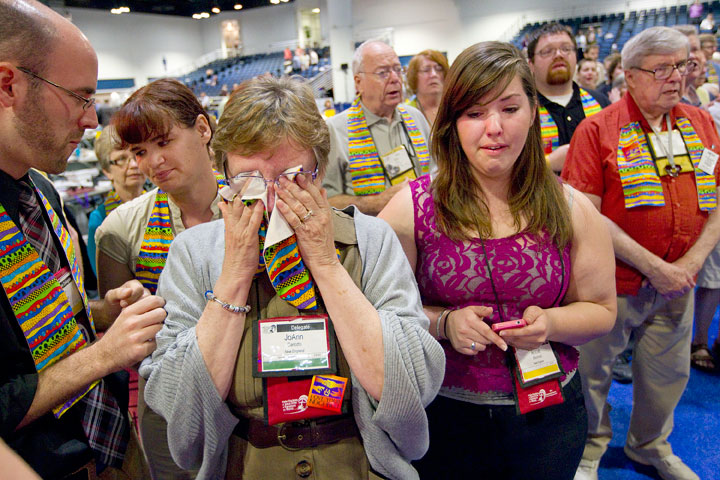 Jo Ann Carlotto, delegate from the New England Annual (regional) Conference, wipes her eyes with a rainbow stole after delegates voted to maintain The United Methodist Church's stance on sexuality.
A UMNS photo by Mike DuBose.

Final actions decreased the number of members of the general boards and agencies and folded the United Methodist Commission on Christian Unity and Interreligious Concerns into the Council of Bishops.

A $603.1 million budget for seven general church funds during the 2013-2016 period was approved and two new line items were added to the World Service Fund, establishing a new $5 million fund for theological education in central conferences and $7 million to recruit and train young clergy in the United States.

Other legislative proposals during Week Two found both acceptance and rejection. Bishop Larry Goodpaster, outgoing president of the United Methodist Council of Bishops, was philosophical after an attempt to establish a "set-aside bishop" was defeated. "We know that the demands placed upon the president of the council will continue to expand," he said. "We will all find ways to support and encourage the person elected in every way possible as all of us who have served as president of the council have experienced."

After days of protest and prayer, along with more than an hour of passionate debate on the floor, no compromise was reached by United Methodists who have differing opinions on the issue of homosexuality and same-sex marriage. As a result, the original language in the Book of Discipline, Paragraph 161F remains intact: "The United Methodist Church does not condone the practice of homosexuality and considers this practice incompatible with Christian teaching."

An attempt to require denominational divestment from specific companies whose products are used by Israel in the Occupied Territories also was defeated. Delegates instead approved a report calling on the United Methodist Board of Pension and Health Benefits to explore "serious peace-making strategies in Israel and Palestine, including positive economic and financial investment in Palestine."

The U.S. clergy pension plan was modified and a plan for ministry to Pacific Islanders adopted.

Recommendations on many of the legislative petitions considered by committees the week before were passed on daily consent calendars. One significant item that almost went unnoticed was a proposal that takes away the security of guaranteed appointments for ordained elders. The measure was approved by consent and a motion to reconsider failed by a vote of 564 to 373.

A new, independent structure for United Methodist Women also was adopted. The group's national policymaking body, formerly known as the Women's Division, will be separate from the Board of Global Ministries, the church's mission agency, for the first time in more than 70 years. 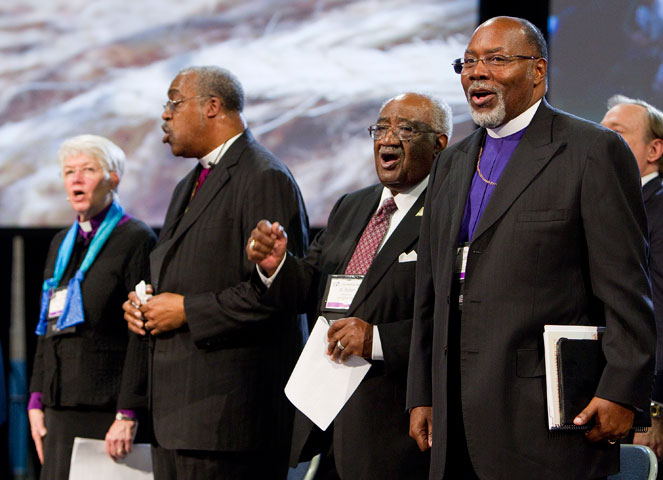 In a riverfront park, United Methodists tried to make an impact on the surrounding community through a festive, musical "Break Bread with* Tampa" lunch on May 1, highlighting both the denomination's commitment to ministry with the poor and the work of local social service agencies.

Back at the convention center, the Ecumenical Day observation at General Conference began with the long-anticipated full communion agreement between United Methodists and five historic African-American Methodist denominations. "I believe the best for Methodism is yet before us," said African Methodist Episcopal Bishop John White. "This full communion gives us an opportunity to make our witness around the world."

Later that evening, a number of ecumenical guests were introduced to General Conference and the Rev. John McCullough, a United Methodist who serves as the top executive of Church World Service, was recognized for his work by the Council of Bishops.

The Rev. Olav Fykse Tveit, the evening's preacher, thanked United Methodists for their "generous and reliable" support of his agency, the World Council of Churches, which allows him and others "to take heart and move on with hope and courage."

Read a recap of Week One at the 2012 General Conference.

Read a full wrap-up of the 2012 General Conference.