As an engineer who has focused on environmental issues since the 1970s, Stephen A. Jurovics knows a lot about climate change.

But as a student of the Bible, he also has found useful references to recycling, sustainability, biological diversity and other aspects of God’s creation in the ancient texts.

The result is his book “Hospitable Planet: Faith, Action and Climate Change,” which is part of the 2018 Reading Program for United Methodist Women. 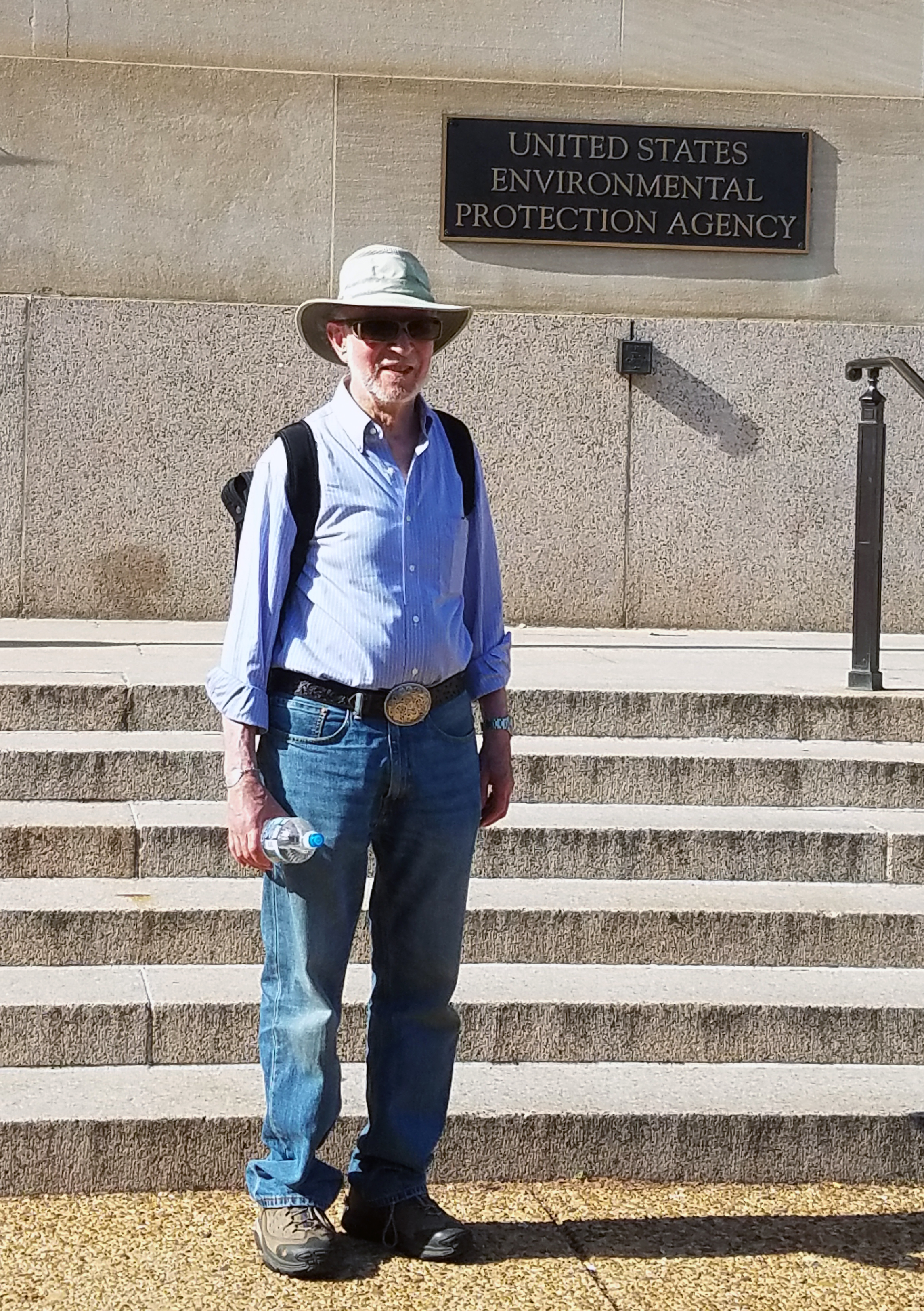 Stephen A. Jurovics stopped outside the Environmental Protection Agency offices while in Washington in April to participate in the Peoples Climate March. He is advocating for a faith-based environmental rights movement similar to the civil rights movement. Photo courtesy of Stephen Jurovics.

“Climate change is having some pretty devastating effects on the earth,” he told United Methodist News Service. “And it also is a moral issue.”

The UMW 2018 Reading Program ordering guide calls Jurovics’ book “an important work of witness and states that faith and connection to God should lead us to save and heal our planet from a looming environmental catastrophe.”

Jurovics, who is Jewish, has been speaking at churches and synagogues about the connection between religion and the environment since the late 1980s. The realization that he needed to organize his research and conclusions in writing provided “the initial motivation” for Part I of “Hospitable Planet.”

As the Raleigh, North Carolina, resident explains in the book’s first chapter, environmental problems are really about the “troubled relationship between human beings and God’s creation.

“At one end of that relationship are secular issues such as climate change, endangered species, and toxic wastes, and at the other end are biblical teachings about the interrelationships among God, people and nature.”

Most of the biblical guidance about environmental issues can be found in Genesis through Deuteronomy, Jurovics writes in the book’s introduction. The Old Testament can offer a perspective for both Christians and Jews “on the environmental-related teachings in the Law Jesus said he came to fulfill.”

For example, he said he found multiple instructions about air pollution in the Bible that are relevant to greenhouse gas emissions. In Part II of the book, he offers 10 measures on how to significantly reduce these emissions.

While other books that address climate change from a religious perspective offer recommendations for individual change, Jurovics is thinking in much broader terms. “We need to transform our society,” he declared.

Stephen Jurovics offers the following suggestions for forming the faith component of an Environmental Rights Movement and acknowledges that many variations are possible:

Actually, he is advocating for a faith-based environmental rights movement similar to the civil rights movement. “This is a call to action,” he said. “You can’t just duck this issue and try to lecture people about what’s moral and what’s not.”

As Jurovics argues on his website, “If members of this faith community not yet involved in mitigating climate change began demanding a forceful response, this could bring the country to the tipping point of full engagement.”

When he attended the People's Climate March at the end of April, Jurovics marched with the “keepers of the faith” community and found “lots of people, very visibly, from different denominations.”

The march was a powerful action, he told UMNS, but faith groups need to address climate change in even more direct ways, using their commitment to faith as a motivation to change public policy.

Interfaith organizations have been sounding the call for advocacy for some time, but he believes such groups need to become more visible. GreenFaith founded in 1992 as Partners for Environmental Quality by Jewish and Christian leaders, is one example of a faith-based advocacy and educational organization; Interfaith Power and Light, which focuses on global warming, is another.

To get his book’s message across, Jurovics has spoken at about two dozen churches in the past year. The United Methodist North Carolina Conference has invited him to be a part of its creation care team, he added. “I think one of the major charges for that committee is how to encourage local pastors to take up climate change as an issue.”