That was the message from the U.S. ambassador to Cote d'Ivoire to more than 200 students who never expected to be in front of such a high-ranking official that Saturday, May 25.

When the English Club of Koumassi at the United Methodist Secondary School asked Amanda Carter to be their godmother, little did the students know that their dream would go beyond expectations.

Not only did she attend their academic year-end festivities, but also she brought her husband; Phillip Carter III, U.S. Ambassador to Cte d'Ivoire. What was just a rumor the day before among the administration, staff and teachers became a reality. Shouts of joy and dances filled the school compound when the Carters got out of the van as ordinary visitors.

Ambassador Carter said the school was like coming home for him because he attended a small Anglican school in the Caribbean that has the same kind of classrooms and the same kind of environment.

The academic year-end festivities this year focused on the importance of foreign languages - English, Spanish, German - taught at schools. Students in this French-speaking country performed plays, dances and other activities in the foreign culture they studied. The sketches were on the value of education and the fight against drug abuse and violence among youth.

The Carters applauded the sense of warmth from the students and their ability to express themselves fluently in English. Phillip Carter stressed the importance of the English language as well as other international languages in today's world. He assured the students that the embassy has rich databases and resources the students can use at no cost to improve their intellectual abilities. "Use it or lose it," he told the students. Joining action with their words, the Carters donated books to the best students and to the school library.

On behalf of the Cote d'Ivoire Annual (regional) Conference, Louis Aboua, the president of the Board of Education, said that the presence of the Carters was "eloquent proof that education is a key value to transform society." Aboua said The United Methodist Church tried to instill that value in the children. 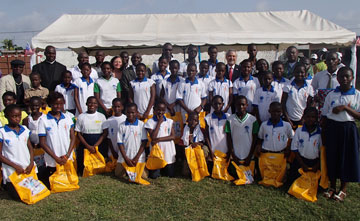 Selected "best students" and administrators pose for a group photo.

He acknowledged the past and present efforts by Americans - primarily partners from the Texas Annual (regional) Conference - to build capacities and provide access to education to children who are less privileged. For example, 65 students from rural areas are benefiting from the "Adopt a student" program sponsored by the Texas Conference.

"I am so happy to see that there is a connection between the people of the United States, the Texas Annual Conference that helps the Methodist schools. I am happy that we can help... ," Phillip Carter said.

Aboua and Mathurin Adjrab, president of the finance and administration board, represented Bishop Benjamin Boni of the United Methodist Cte d'Ivoire Conference.

Speaking on behalf of the staff, Lazare Kouassi, general director of the Methodist Schools System, expressed gratitude to the ambassador and his wife for choosing "their humble school."

He said he hoped that the support of the Carters and the people of the United States would enable the Methodist schools to enter "an international dimension." He assured them that the pedagogy in use is the same as in the United States. "The holistic promotion of man, democracy and the preservation of a clean environment," he concluded.

The Ivorian Methodist schools system is a network of 68 schools from kindergarten to secondary school. It hosts every year about 16,000 students from every walk of life. Most are poor; 3,000 children are from homes that live on less than $1 a day. Many cannot afford the $12 yearly school fee.

*Broune is the communicator for the United Methodist Cote d'Ivoire Annual (regional) Conference.