Under a cloudless blue sky, Otto Braided Hair turned to the east and prayed for his Cheyenne ancestors.

Behind him, a group of United Methodists had formed a circle on a ridge above the place where, nearly 150 years ago, troops led by Colonel John Chivington - a Methodist minister — brutally slaughtered occupants of a Native American village that was largely composed of women, children and the elderly.

Standing near the stone marker commemorating the date — Nov. 29-30, 1864 — the church people and native people alike had come to show their sorrow.

For Otto Braided Hair, the connection is very personal: His great-grandparents were among those who managed to escape the massacre. But their survival does not lessen the pain that still makes it difficult for him to speak of the unthinkable attack against the Cheyenne and Arapaho tribes. At least 165 of the estimated 500 village occupants died and many others were wounded.

The United Methodist Commission on Christian Unity and Interreligious Concerns had invited him and other Northern Cheyenne representatives from their reservation in Lame Deer, Mont., to be a part of its Sept. 22-25 meeting in Denver. The commission is responsible for organizing an "Act of Repentance" for the 2012 General Conference, the denomination's top legislative body, to help heal relationships with indigenous persons.

To prepare for that task, "it will be necessary for each of us to listen attentively to the voices of indigenous peoples around the world and the voices of Native Americans," the Rev. Stephen J. Sidorak Jr., the commission's top executive, told directors.

'A crime against humanity'

The Methodist connection to Sand Creek demands such attention. And Americans need to know about the massacre because it was "a crime against humanity," said David Halaas, former chief historian of the Colorado Historical Society, who has spent 17 years on the historic site project.

The passage of time has not made the horrors of the attack any less vivid, particularly for tribal members. "I wish my elders were here to talk to you, to tell you what they heard from the survivors," Otto Braided Hair told the group during an afternoon dialogue session in Denver. 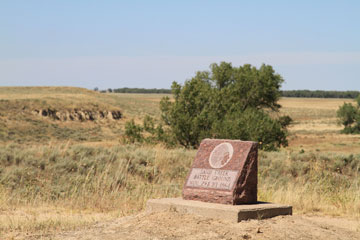 He was 8 or 9 years old when his father first recounted the story of Sand Creek to him. When he heard what had happened to the children, "I remember walking away," he said. It was difficult to breathe. "I remember thinking, why, why?"

Braided Hair, his great-grandfather, "heard the voices and the guns" of the troops as they approached on that cold November morning. He grabbed a lariat and managed to secure a nearby horse. He placed his pregnant wife on top of the horse, which blended back into a passing herd, before managing, somehow, to escape the area himself.

"If you know the history, (the massacre) kicked off about 15, 16 years of warfare — what they call the Plains Indian wars," his great-grandson said.

Reginald Killsnight Sr., recalled how he and other children joined their elders for a showing of "Soldier Blue," a 1970 Hollywood movie with Candice Bergen and Peter Strauss with a graphic depiction of the massacre.

Some of the children did not realize the movie told the story of their own tribe. After the showing, the elders were silent and the young men tense with anger. "If there was a white person there, I think he would have got hurt that night," he said.

Tensions between Native Americans and settlers grew after gold-seeking prospectors and settlers flooded into what became the Territory of Colorado in 1861. In the spring of 1864, U.S. troops killed Cheyenne Chief Lean Bear and burned the Cheyenne camps of Crow Chief and Raccoon.

After the Hungate family was killed on their ranch and their remains displayed in public in Denver, panic ensued and a new volunteer regiment of more than 1,000 men was recruited. The Cheyenne and Arapaho were told to make their way toward Fort Lyon if they wanted peace.

The encampment at Sand Creek was following those orders when it was surprised by musket and artillery fire on Nov. 29. Chief White Antelope, wearing a peace medal given to him by President Abraham Lincoln, was shot down, the historian Halaas said, and the American flag flying over the Lodge of Chief Black Kettle was ignored. "The solders had been told before they attacked to take no prisoners," he added.

Two junior officers who had tried to dissuade Chivington from his course of action, Capt. Silas Soule and Lt. Joe E. Cramer, ordered their men to stand down. But the rest of the cavalry attacked with a vengeance as they pursued the fleeing Native Americans. "The killing went on for five miles," Halaas said. 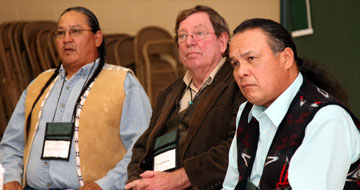 What happened at Sand Creek sent a message to all Native Americans, Halaas said. "Everybody knew Black Kettle had dedicated his life to peace," he explained. "If his village could be attacked, anybody could be attacked."

Despite the gruesome details that emerged about the mutilation of the dead, Chivington — who had left his role as a presiding elder in the Kansas-Nebraska Conference to join the army — was "readmitted on trial" to the conference in 1868, said Robert Williams, top executive of the United Methodist Archives on Archives and History.

The vivid letters that Soule and Cramer wrote to the commanding officer at Fort Lyon about the atrocities and testimony in federal hearings led Congress to condemn the attack as a massacre the following year and promise reparations to the survivors.

The reparations have never been paid, but the discovery of those long-lost letters helped spur final Congressional approval and the Sand Creek Massacre National Historic Site was established in 2007, said Alexa Roberts, site superintendent for the National Park Service.

With current boundaries five miles long and two miles wide, Sand Creek is a "living landscape" of Native American history. The barren, windswept site attracted 4,000 visitors last year. "When you go there, it's like a beating heart, it resonates," she added.

A hallmark of the site's development has been the collaborative efforts of diverse parties, including tribal representatives, government entities and historians. "Going forward together has been both a challenge and a tremendous reward, I think, for everybody," Roberts said.

As the bus carrying commission members entered the Sand Creek Massacre National Historic Site on Sept. 24, coming from the same direction that Chivington and his men had approached the sleeping Indian village, Denver Area Bishop Elaine Stanovsky invoked a spirit of repentance.

"We're here today remembering a time when people shut your love and grace out and human tragedy occurred," she prayed.

The Native Americans have found their own ways to purify what is a sacred site for them. A traditional cloth ceremony has been used, Otto Braided Hair explained, "to cleanse the ground of all the bloodshed and killing. We think it worked."

He welcomed the United Methodist presence at the site because, he noted, "you come here in a good way. You come here to seek healing."

In the center of the ceremonial circle, Reginald Killsnight lit a braid of sweetgrass and waved it gently, dispensing a smell that reminds him of peace, serenity and prayer.

He thanked the group for joining them. "I think one of the most important things for all of us, in our own healing, is praying together," he said.

United Methodists alternately expressed fear and contentment with the U.S. Supreme Court decision released June 24 that holds there is no longer a federal constitutional right to an abortion.
Church History

An Oklahoma church and a public charter school are focused on teaching Native youth about their culture and equipping them to thrive.