Many United Methodists have known George McGovern not as a politician but as a faithful church member who emulated John Wesley in his quest to overcome hunger and poverty and promote peace and justice.

"For him, the Social Gospel was not just a theory, but the core of his faith in seeking to make the world a better place," said the Rev. Donald Messer, executive director of the Center for the Church and Global AIDS and a longtime friend of McGovern.

McGovern, 90, died in the early morning hours of Oct. 21 after being admitted to the Dougherty Hospice House in Sioux Falls, S.D., on Oct. 15. His medical conditions had worsened in recent months, due to age, and his family reported on Oct. 17 that he was "no longer responsive."

The Rev. John McCullough, a United Methodist pastor and executive director of Church World Service, saluted McGovern's commitment to using his years of public service to bring about healing and reconciliation and called his death "a sad moment for our nation."

Born in Avon, S. D., on July 19, 1922, McGovern was the son of a Wesleyan Methodist minister, the Rev. Joseph McGovern, and Frances (McLean) McGovern and the roots of his faith ran deep. "Practically every speech and certainly every book he wrote cited biblical references that were at the core of his personal and political philosophy," Messer said.

As a student at Dakota Wesleyan University in Mitchell, S.D., he met fellow student Eleanor Stegeberg and they were married in1943. McGovern later taught history at United Methodist-related Dakota Wesleyan and the George and Eleanor McGovern Center for Leadership and Public Service was launched at the university in 2006.

Because World War II interrupted his studies - he earned the Distinguished Flying Cross for flying 35 combat missions as a B-24 bomber pilot in Europe - McGovern did not graduate from Dakota Wesleyan until 1946.

Then, the advent of the atomic bomb led McGovern to change course. In a 2005 audio "profile" with United Methodist Communications, McGovern said he thought about the larger questions of life and death "and the absolute necessity of changing the hearts and mind of man if we were going to survive" and decided to give the ministry a try.

That experiment ended after a year at Garrett Evangelical Seminary and a student pastorate in Diamond Lake Church in Mundelein, Ill., although "I liked every minute of it," he recalled.

"I felt especially uncomfortable as a young guy just out of the Air Force, you know, administering the ritual part of the church - the baptisms, the funerals, the communion," he said. "&ellipsisThey were so kind of foreign to my own experience that I thought I' d be more comfortable and maybe even more effective as a college prof and a writer."

He went on to Northwestern University, where he earned a master's degree and doctorate in American history and government.

Impact on hunger and poverty issues

Elected to Congress in 1956, McGovern lost his first bid for the U.S. Senate in 1960. But after President John F. Kennedy named him as the first director of the Food for Peace Program and Special Assistant to the President, he began to have a direct impact on issues of hunger and poverty.

"I persuaded President Kennedy to authorize me to offer to start the program with a $100 million fund - $40 million in commodities and another million dollars in cash that would come not only from the United States, but other countries," he recalled for United Methodist Communications. "And it was adopted. And that was the beginning of the U.N. World Food Program. It's the biggest humanitarian agency in the world and indeed the biggest in world history."

But his political service was not over. Elected to the Senate in 1962 and re-elected in 1968 and 1974, McGovern served as a member of the Senate committees on agriculture, nutrition, forestry and foreign relations. He also helped expand key nutrition programs on the Joint Economic Committee. 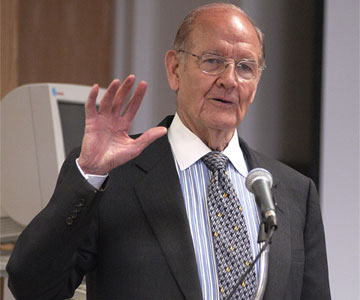 George McGovern spoke at a Servant Leader Symposium, sponsored by the United Methodist Higher Education Foundation and the Kerr Foundation, in Washington in 2003. A UMNS file photo by Jay Mallin.

McGovern told United Methodist Communications that his biggest regret over the 1972 presidential race, of which he was the Democratic nominee, was not his loss but that "the American people never really understood what I was attempting to do, what my views were based on&ellipsis" Instead, he said, his opponents painted him "as kind of an unstable, radical person."

That was not the McGovern that many United Methodists knew, not the man who believed that service to others, and to God, was the key to a good life.

Several United Methodist clergy were present when McGovern announced his bid for the presidency in Aberdeen, S.D., including then Bishop James Armstrong, who had served as a delegate with McGovern to the 1968 assembly of the World Council of Churches in Uppsala, Sweden.

"We became close friends over the years, like a brother to me," Armstrong said. "His faith was deep and influenced by his childhood, his journey, military service. War gave him a sense of futility, and it motivated him to action. His faith was applied Christianity."

McGovern also interacted with and made an impression on several other United Methodist bishops throughout the years. Bishop Rueben Job saw McGovern as a model for John Wesley's three simple rules: Do no harm. Do all the good you can. Stay in love with God.

"Even though I was a campaign volunteer for Sen. McGovern in 1972, met him, and like millions of other people heard him often, I mostly observed his life from a distance," Job recalled. "However, whenever I think of him, the words integrity and fidelity come to mind. He practiced truth telling in every aspect of his life and career."

Bishop Deborah Lieder Kiesey, now of the Michigan Area, served the Dakotas Annual (regional) Conference from 2004-2012 during the time the McGovern Library was built. "Faith and action were very closely related to him. A man of really deep faith, his passion and energy has caused worldwide good. His work to end world hunger speaks volumes."

It was a mission he would carry on for the rest of his life. "Other politicians when they leave office grab lucrative lobbyist positions, but McGovern devoted his life to find ways of ending hunger in the world," Messer said.

"In recent years, he imagined an international school lunch program and persuaded his friend, Sen. Bob Dole, to join him in promoting the idea," added Messer, who wrote a book with them about hunger issues. "Today children in Africa, Asia, and South America, are getting school lunches because of his vision and unending advocacy."

McCullough noted that McGovern believed in the power of mobilizing people to respond to issues they care about and was a "huge supporter" of the CROP Hunger Walk. "For us in Church World Service, he served as a real source of inspiration," he added.

Generous in giving his time for consultation and guidance, McGovern served as a "key adviser" on the agency's School Safe Zones initiative started in Africa in 2003. Adopted as an official strategy of the Kenyan Ministry of Education, the zones are expanding into Rwanda and Uganda. "They are now a key part of the work of Church World Service to address issues of hunger and malnutrition," McCullough said.

In his final years, McGovern divided his time between South Dakota and St. Augustine, Fla. He continued to practice and live out his faith in daily life.

The Rev. Bob Ruedebusch, pastor of Sioux Falls First United Methodist Church, provided pastoral care for McGovern in the last few months. "Growing up the son of a Wesleyan pastor, he was always around the church. He loved the music," Ruedebusch noted. "In one of my recent visits with him we sang, 'Leaning on the Everlasting Arms.' He started and I just joined in."

One of McGovern's last public appearances was attending the Sept. 16 installation and welcoming service in Sioux Falls for Bishop Bruce Ough, the new episcopal leader of the Dakotas-Minnesota Area. McGovern enjoyed the day interacting with several clergy and laity from the Dakotas Conference. "It is great to see so many Methodist here loving the Lord and this fine day," he remarked.

Ough is to officiate and give the sermon at McGovern's funeral service. "It is an honor and privilege for me to do so," he said. "Sen. McGovern embodies the best of the Judea Christian prophetic tradition. He is a person that throughout his life and as a leader has taught people to act with justice and compassion. He has called us to all be our best."

*Bloom is a United Methodist News Service multimedia reporter based in New York. Follow her at http://twitter.com/umcscribe. Gosmire is associate director of communication, Dakotas Annual Conference.