Every year, retired United Methodist Bishop Woodie White gets to see the story of the civil rights movement through fresh eyes: those of his students.

This year, White and his students, along with other United Methodists, joined an estimated crowd of 80,000 who packed Selma, Alabama, March 7-8 for a weekend of events marking the 50th anniversary of “Bloody Sunday,” including a speech by President Barack Obama and the annual march across the Edmund Pettus Bridge.

White, bishop-in-residence at Candler School of Theology at Emory University in Atlanta, takes students from his “Methodist Church and Race” class on an annual pilgrimage, with stops in Alabama cities where pivotal moments of the movement occurred.

The trip always culminates with a march over the Edmund Pettus Bridge in Selma, where a violent confrontation between police and peaceful marchers occurred March 8, 1965. The clash helped bring about passage of the 1965 Voting Rights Act.

White said one of the things he wants his students to gain insight on is “how much people sacrificed and gave. However imperfect we are right now, I want them to see where we were and I want them to have from this a sense of responsibility that they now have a job to do.” 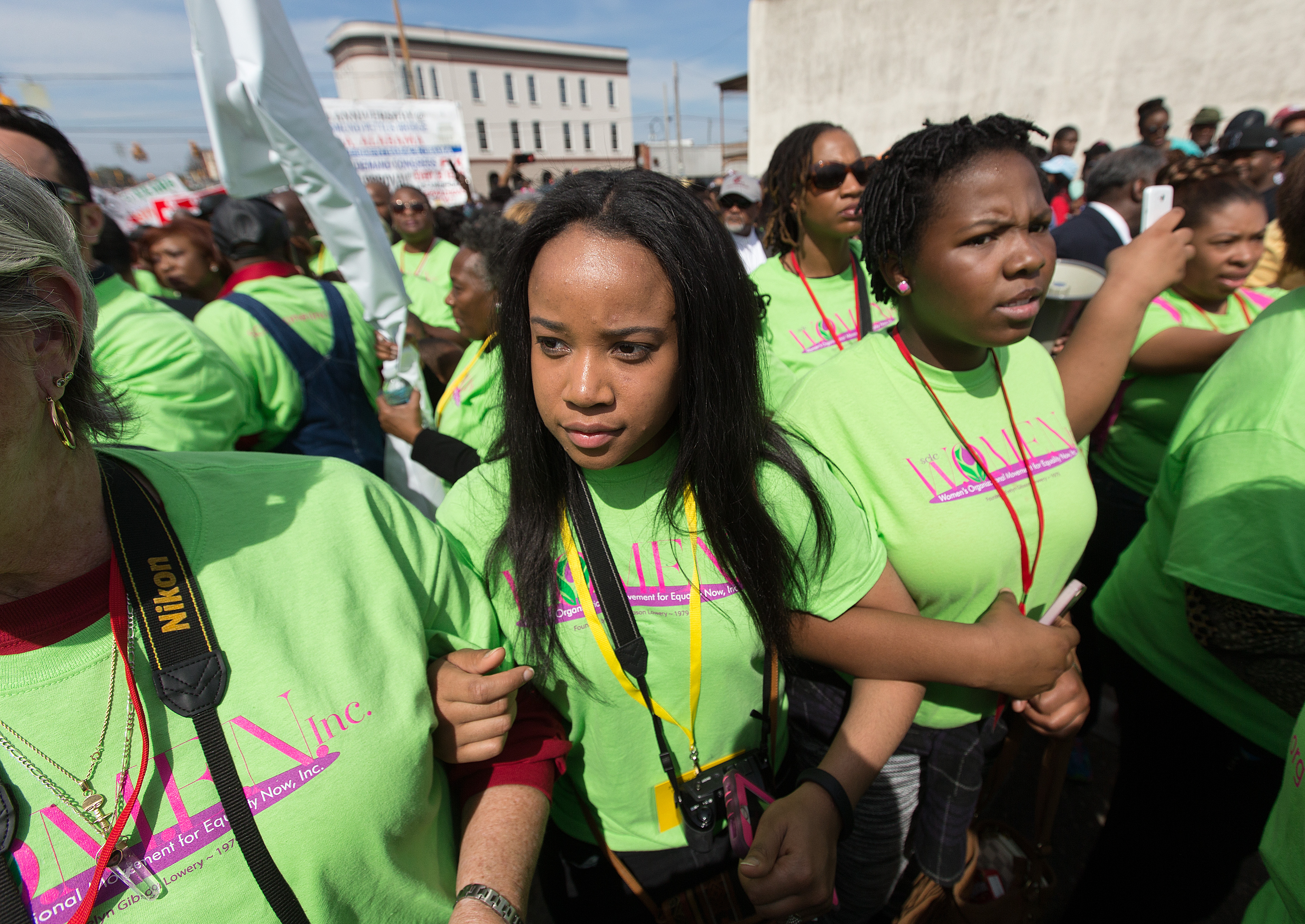 Candler School of Theology student Monique Scroggins (second from left) links arms with other marchers from the Southern Christian Leadership Conference to cross the Edmund Pettus Bridge in Selma, Ala., during the 50th anniversary observance of the "Bloody Sunday." Photo by Mike DuBose, UM News.

Amber Lea Gray, a first-year student at Candler, said it was eye-opening to get to meet and hear stories from original Freedom Riders, such as what it was like to be on a bus when it was bombed.

“I’m from Mississippi and live in the South, and there’s a whole culture that I was unaware of, being a white female – a hurt I wasn’t aware of, and a passion for justice,” Gray said.

‘The spirit of Selma went with us’

The Revs. Kent Millard and Don Messer were students at Boston University School of Theology in 1965 when the call came from the Rev. Martin Luther King Jr. for seminarians, laity and clergy to join in the march for freedom in Selma. They joined a group of 83 seminary students who traveled by bus to participate in the Selma-to-Montgomery march but it was delayed for several days. Instead, they were part of other marches throughout Selma protesting illegal arrests and demanding voting rights for all. 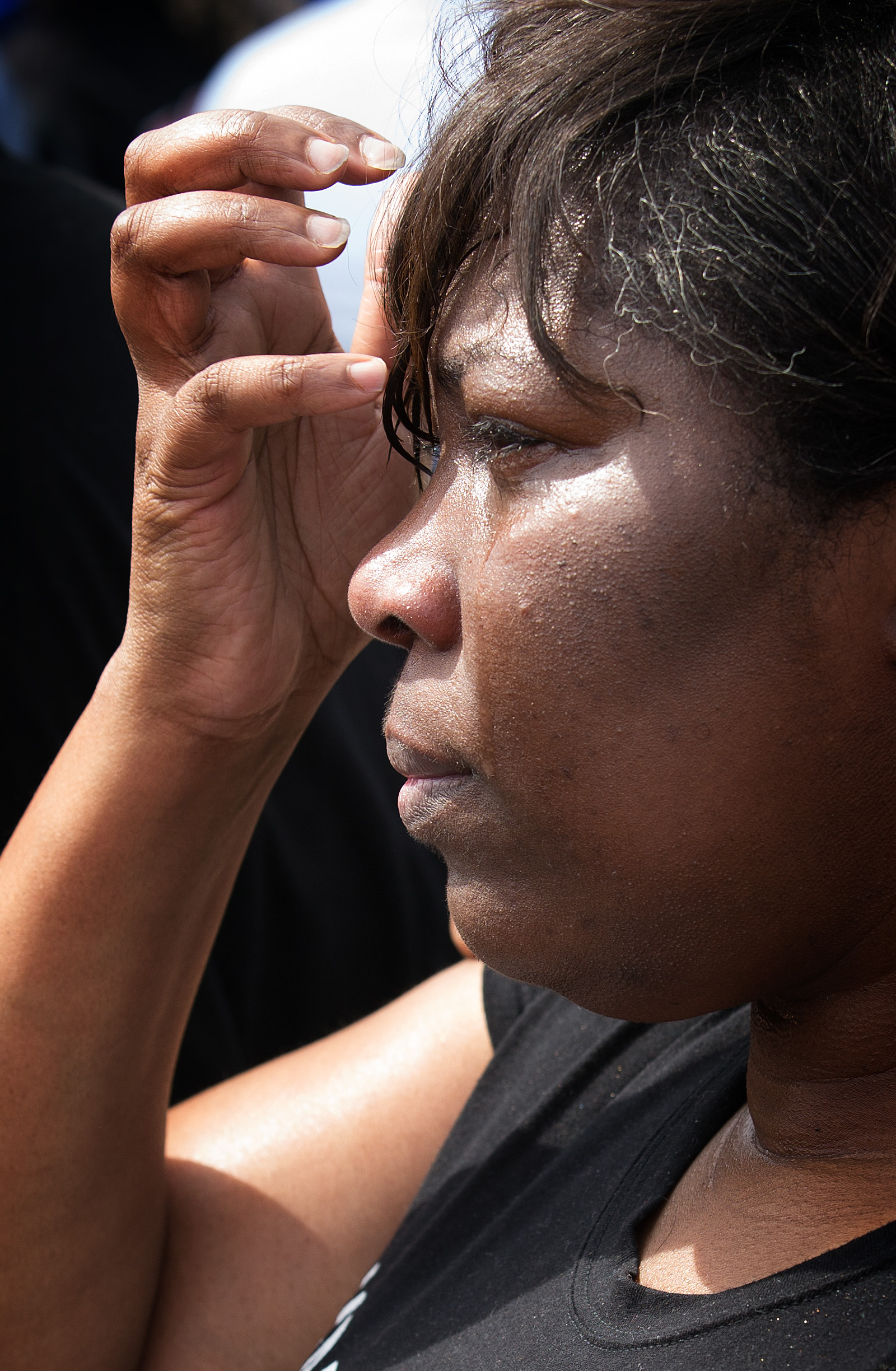 A marcher sheds tears during the 50th anniversary observance of the "Bloody Sunday." Photo by Mike DuBose, UM News.

“We left Selma, but the spirit of Selma went with us,” Messer said. “We were challenged to commit our lives to the continuing work of securing human rights for all people.”

Millard, now retired from the Indiana Conference, showed a photograph of King speaking at Boston University, with himself in the background acting as a bodyguard.

“Dr. King asked me, when I met him at Boston University, ‘Mr. Millard, what are you going to do for civil rights in your lifetime?’ That is the question I continue asking myself.”

Messer, former president of Iliff School of Theology and current executive director of the Center for the Church and Global AIDS, was coming back to Selma for the first time since 1980. He said that while remembering the violent clashes of 1965 is somber, the atmosphere now has an air of celebration.

“When you sing gospel songs and freedom songs, there is always a spirit of celebration,” he said. “We have a lot to be proud of, as President Obama said, but we do have a long way to go. We have to face up to the reality of the evil of racism in ourselves, our families, our society and our church. It’s an unending struggle and we need to be ever alert and active.”

Elizabeth Pollard, a third-year student at Candler, said it was “a powerful experience to walk across the Edmund Pettus Bridge and think of all who went before me. It’s bittersweet because I’ve been able to live to see the result. To think about how this bridge on the original day was covered in blood – I appreciate the sacrifice and I don’t take it lightly that I was able to participate 50 years later.”

While marching across the Edmund Pettus for yet another year, White was asked if the experience ever gets old.

*Butler is a multimedia producer/editor for United Methodist Communications.  Contact him at (615) 742-5470 or [email protected]. To read more United Methodist news, subscribe to the free Daily or Weekly Digests.