Experiences with last year’s U.S. hurricanes and coverage of the devastation wrought by Harvey in Texas and Louisiana have put United Methodists in the Southeast on high alert as Hurricane Irma approaches.

Pam Garrison, disaster response coordinator for the Florida Conference, said the conference is still working on both coasts to repair damage from Hurricanes Hermine and Matthew. Volusia, Flagler, Putnam and St. Johns counties, where Matthew recovery work is proceeding, are now part of Irma’s projected path.

“All these folks we are still trying to help are in the path of harm’s way again,” she said, adding that volunteers already working in the area are getting ready to help with the Irma response.

Irma weakened to a Category 4 Hurricane as it devastated the Caribbean, but winds picked up as the storrm sped toward south Florida, where Irma was forecast to hit South Florida as a Category 5, one of the most powerful hurricanes ever recorded in the Atlantic. As of the morning of Sept. 8, the hurricane had claimed at least 19 lives.

The United Methodist Committee on Relief has been receiving daily briefings in advance of Irma making landfall on the U.S. mainland, said Catherine Earl, the agency’s director of U.S. disaster response and partner relations.

United Methodist conferences and local congregations in Irma’s expected path are preparing, she said, while those outside the impact zone are looking at how to offer hospitality to evacuees passing through their areas.

“Florida is about as ready as any conference can be even though they’re still going to get overwhelmed,” Earl said. 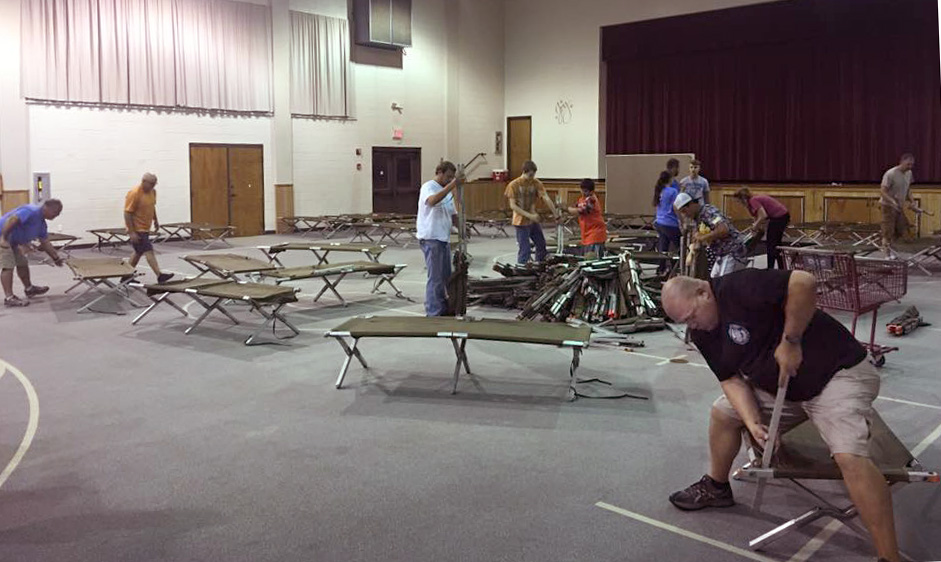 In a blog post, Florida Conference Bishop Ken Carter wrote that “strong teams and clear processes” were in place, along with a call center and plans of action by district superintendents.

“We urge pastors to communicate more, not less, about how the local church is present and in mission during these days,” he said. “Some will open their homes to colleagues and friends. Some are in the process of evacuation. Let us err on the side of patience and generosity with each other.”

The Miami-Dade area, which hasn’t been hit by a hurricane in a long time, is a densely populated, culturally diverse area that will present many recovery challenges, Garrison noted.

About 85 percent of the United Methodist pastors in the area are staying rather than evacuating.

Staff who work in Ministry Protection, the self-insurance program the Florida Conference provides for churches, have a checklist that allows churches that don’t already have a storm plan to prepare quickly.

Garrison is rallying volunteers and making sure they know who to contact if they can help after the storm. “We are also doing our best to prepare for the spontaneous, untrained volunteers who will show up to help,” she said.

Hurricane Irma already is having an impact on the South Georgia Conference because of the evacuation process in Florida, said Allison Lindsey, the conference’s associate director for connectional ministries.

With a Saturday, Sept. 9, morning evacuation order now set for anyone east of I-95 along Georgia’s coast, “All of the coast will be coming across,” she explained. “We’ve really had an influx across South Georgia.”

The conference will continue to update its list of churches being used as Red Cross, Good Samaritan or overflow shelters, which totaled seven on the morning of Sept. 8. A shower trailer is being moved to Riverside United Methodist Church in Macon. “We’re just plugging in resources and health kits for the shelters,” she said.

Lindsey said she is grateful for the regular calls that UMCOR has set up among the conferences preparing for Irma. “We can help see what the needs are, and we can reach out to each other,” she said. “UMCOR is a solid resource.”

The South Georgia Conference also is better prepared after responding to damage from Hurricane Matthew and a tornado in the Albany area last year. “We had not had any catastrophic event in South Georgia in the past 25 year,” Lindsey explained. “Matthew and the tornado in Albany kind of woke us up. We have worked hard to build capacity in the last year and we have done that.”

United Methodist conferences posted information about how churches can prepare for Irma and how to help.

Some North Georgia congregations were on standby to serve as Red Cross shelters if needed and emergency response teams that had already rallied to help with Harvey were preparing to aid those in Irma’s path.

Recent disasters also have helped propel the South Carolina Conference into a state of readiness for Irma, reports Jessica Brodie, the conference communicator.

Churches and individuals are making evacuation plans and gathering water, food, batteries and other needed supplies. Gas stations already have long lines as evacuees from Florida and other coastal regions seek refuge.

“Our Early Response Teams are all on standby and ready to deploy wherever they are needed, and we’ve been gearing up our supply of cleaning buckets and health kits. At this point, we’re as ready as we can possibly be,” said Matt Brodie, the conference’s disaster response coordinator.

“We’ve had a lot of experience with this now between the flood of 2015 and last year’s hurricane, so we feel we are in a good place to respond to needs as soon as it’s safe to do so.”

Some churches are also serving as shelters for evacuees. One church, St. John’s United Methodist Church in Batesburg, is an official rest stop on U.S. 178, west of Columbia.

Many conferences have been collecting supplies for Hurricane Harvey. Some of those will not be shipped, for now, until needs are assessed after Irma.

“We are now telling people who were making up flood buckets and hygiene kits to hold them at their local church,” Garrison said. She noted that last year, the Florida Conference sent over 3,000 flood buckets to Louisiana and that the conference has truckers who donate their time to ship the buckets.

South Georgia can get supplies quickly to Florida, Lindsey pointed out. So the conference’s original plan to send hygiene and cleaning kits to the Texas area has changed.

“In conversation with UMCOR, our conference is in place to serve as a staging location for the distribution of supplies not only for South Georgia, but surrounding conferences if and when needed,” a Sept. 7 update on the South Georgia website stated.

Bloom is the assistant news editor for United Methodist News Service and is based in New York. Brown is news editor at UMNS. Kelly Roberson in South Georgia, Jessica Brodie in South Carolina, Gretchen Hastings in Florida and Sybil Davidson in North Georgia all contributed to this report.