At 9:30 a.m. on a sunny Thursday morning about 30 United Methodist young adults dressed in white T-shirts and jeans converge at the home office of the Sierra Leone Conference, in Central Freetown.

Their T-shirts say it all: “UMC Says No to Election Violence” and “We na Wan Famili,” which means “We are one family” in Krio — the most widely spoken pidgin language in Sierra Leone.

With huge speakers mounted on a Toyota truck, the young adults board four other vehicles as the convoy leaves the UMC House on Feb. 8 and heads toward the east and rural Freetown. This is the final day of a two-day community sensitization tour in the city; on Feb. 6, the team headed west reaching out to the Ogoo Farm and Laka communities.

The crowds are receptive to the message, adding voice to their emotions. “Una tell dem” (“Please tell them”), a woman yells from the crowd at the Hastings-Jui intersection, where there is a beehive of activities as commuters crisscross to and from the city and into other outlying communities.

Others clap as the messages ring out, while some abandon their daily chores to come closer and listen.

“We have prayed and prayed. Now, we want to put our prayers into action. Today, we are out on the streets physically meeting the people, especially the young, and telling them about nonviolence in the March 7 elections,” said Sylvanette Tawah, associate director of the conference’s Youth and Young Adults Ministry. 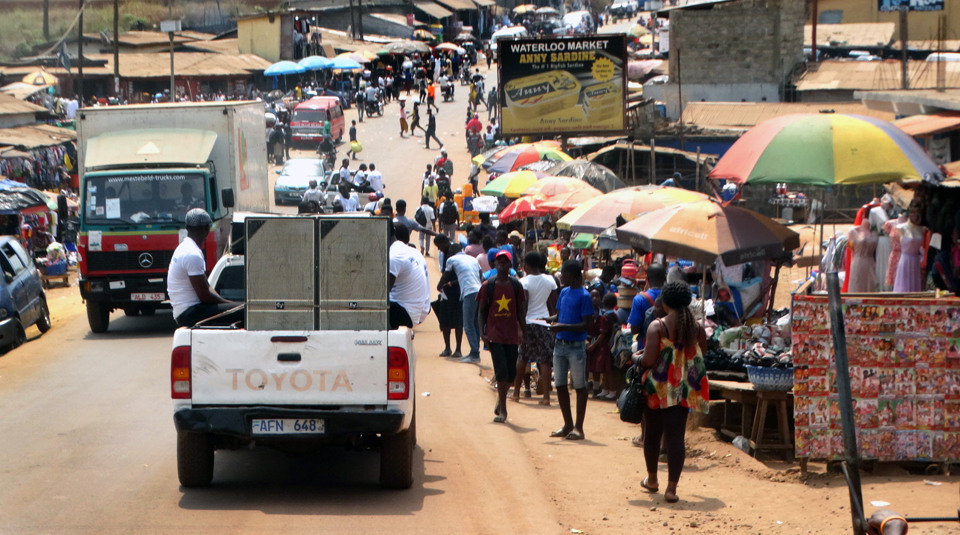 Election violence is a common occurrence in Sierra Leone. There are 16 political parties contesting the March 7 multi-tiered elections for president, parliamentary and local councils.

President Ernest Bai Koroma of the All Peoples Congress is ending his second and final five-year term and is campaigning for Samura Kamara — his party’s candidate — to succeed him. Julius Maada Bio, who lost to Koroma in 2012, is running again for the country’s main opposition party, the Sierra Leone Peoples Party.

The newly registered National Grand Coalition also has a candidate in the race: Kandeh Yumkella, former director-general of The United Nations Industrial Development Organization. Yumkella’s party contends Sierra Leone has been polarized for too long along party lines and has little to show for it more than 50 years after independence. The National Grand Coalition’s message of change is attracting a huge youth following.

With inflation in double digits, the stakes are high and there have already been a few clashes and deaths, which state authorities have dismissed as isolated incidences.

At a recent ruling-party campaign rally in the capital city of Freetown, at least one person died and several others were wounded, including police officers. Police sources have confirmed that over 50 were arrested and are being investigated. 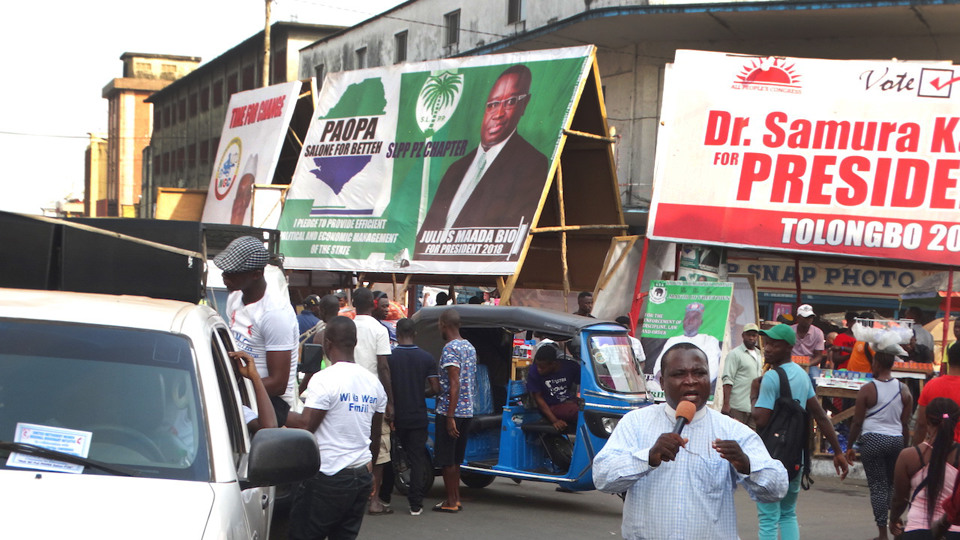 The Rev. Sylvester Holima (at right with microphone) prays for nonviolent, free and fair elections as young adults distribute leaflets on credible elections and read out peace messages at PZ, the city center. In the background are billboards for candidates in the upcoming elections. Photo by Phileas Jusu, UM News.

The United Methodist Church is not alone in its efforts to curb election violence across the country. Civil society groups, non-governmental organizations, the media, police and musicians also have been joining forces.

On the United Methodist campaign tour, the speakers blast the latest nonviolence songs that the country’s top musicians have put together in Krio.

In addition to the music, the young adults share their own messages, which are simple and, at times, blunt: “Put country first.” “Don’t allow politicians to use you.” “After violence, you rot in jail and the politicians will live to enjoy power and proceeds of power. They will not defend you when you fall foul of the law.”

The Rev. Sylvester Holima, the conference’s Youth and Young Adults Ministry director, leads the campaign and guides the young people as they move into markets and busy areas of the city. He prays at every location for peaceful elections and preaches against violence that might lead to war, in the process reminding Sierra Leoneans of the barbarity that accompanied the civil strife in the 1990s until 2002.

He prays for the young people in the east end of Freetown who are often prone to violence. The people at the park applaud with a thunderous “Amen!”

The message of the United Methodist young people seems to resonate with the target audience: the unemployed young people who are often used by politicians. The Methodists present themselves as examples of what young people can be if they choose the right path in life. 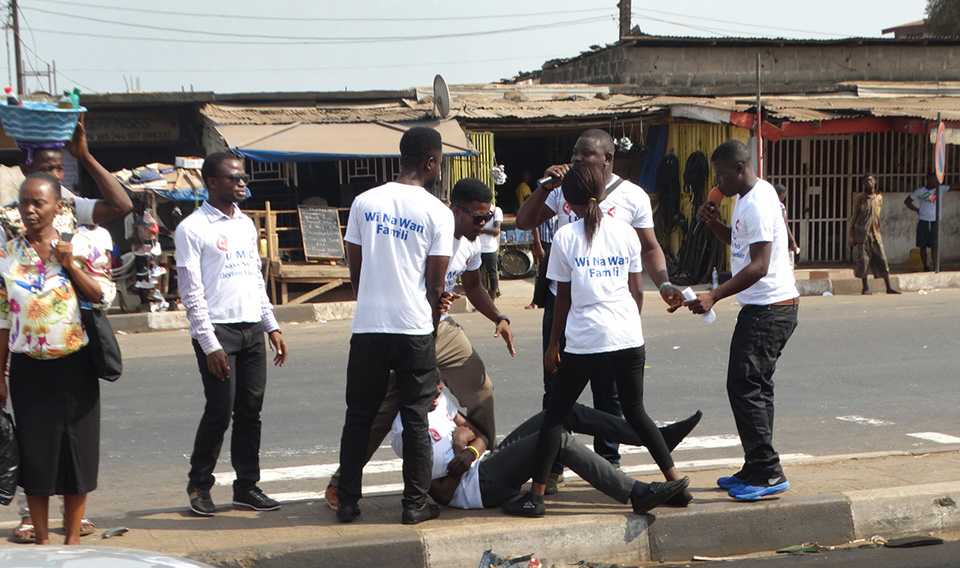 United Methodist young people act out a skit in Kissy in eastern Freetown on how political arguments and intolerance can lead to violence. Photo by Phileas Jusu, UM News.

The messages from Kema Sam-Kpakra, the United Methodist western district president for the young adults ministry, appeal more to women and young people in many of the places the campaign team passes through.

“We all know what war means — suffering, starvation, human rights abuse; it is young people and women like you and I who die when there is war. … Don’t kill one another for politicians who do not even know your names,” she said.  “Elections are about persuasion, not violence.”

Holima wished he had enough funding to reach out to more districts classified as trouble hotspots, but funding is limited. United Methodist regional missionary Finda Quiwa provided the money for the two-day campaign.

Sierra Leone Area Bishop John Yambasu also addressed the issue of election violence in his episcopal speech at the 138th session of the Sierra Leone Conference on Feb. 1.

“As always, this is the time when unscrupulous politicians will stop at nothing to ensure they win the elections most often at the detriment of the masses. … The saddest thing that has happened in this nation is that the whole country has been polarized,” he said during his speech. “This is really terrible for a country that is still struggling to maintain our fragile democracy in a world of terrorism and international socio-economic bigotry.”

Jusu is director of communications for The United Methodist Church in Sierra Leone. News media contact: Vicki Brown at (615) 742-5470 or [email protected] To read more United Methodist news, subscribe to the free Daily or Weekly Digests.

In collaboration with the Council of Churches of South Africa, United Methodists are educating young people about xenophobic attacks and the meaning of being “foreign.”
Disaster Relief

Alert: Bishop calls for prayers as volcano erupts in DRC

More than 5,000 United Methodists are fleeing Goma, Democratic Republic of Congo, in the wake of a volcano. Bishop Gabriel Unda asks for prayers.
General Church

Separation in the church could affect Africa more than any other continent, and United Methodists must work to keep the unity of the Body of Christ.