As the 150th anniversary of the Sand Creek Massacre in Colorado approaches, United Methodists are focused on healing and setting the record straight through a research project.

That focus includes coming to terms with the involvement of two Methodists, John Chivington and John Evans, in the 1864 massacre, when U.S. soldiers killed at least 165 Native Americans living in a temporary village. Most of the victims were women, children and elderly.

The role of Chivington, leader of the 700 men who attacked the village of Southern Cheyenne and Arapaho people at Sand Creek, is well documented.

Now, Northwestern University in Evanston, Ill., is looking into Evans, the city's namesake and a founder of the university, and his role in Sand Creek. He was territorial governor of Colorado in 1864.

"There's an openness and timeliness of this," said Mountain Sky Area United Methodist Bishop Elaine Stanovsky about Northwestern's decision. "It seems to me it's time the truth came out about the Sand Creek massacre."

Since her assignment to Denver in 2008, Stanovsky has taken a leading role in trying to heal relationships with Native Americans, working within the denomination as well as with members of descendant tribes, area officials, historians and the National Park Service, which maintains the Sand Creek Massacre National Historic Site, 160 miles southeast of Denver.

The Methodist connection was acknowledged in 1996 when General Conference, the denomination's top legislative body, met in Denver and adopted a resolution entitled, "Support Restitution to the Cheyenne and Arapaho Tribes of Oklahoma for the Sand Creek Massacre." Chivington was erroneously described as "a Methodist lay preacher" instead of a church elder in that resolution.

The resolution also failed to acknowledge the Northern Cheyenne Tribe of Montana and the Northern Arapaho Tribe of Wyoming, also federally recognized descendants of the Sand Creek Massacre, Stanovsky said.

The 2008 General Conference voted to contribute $50,000 to the development of a research and learning center at the Sand Creek Massacre National Historic Site and authorized the United Methodist Commission on Christian Unity and Interreligious Concerns to work with the National Park Service on the center.

An additional contribution of $75,000 to the historic site was approved by the United Methodist Connectional Table from the World Service Contingency Fund.

The 2012 General Conference, the denomination's top legislative body, participated in "An Act of Repentance Toward Healing Relationships with Indigenous Peoples," which is considered to be an ongoing process, and adopted a petition submitted by Sheridan (Wy.) United Methodist Church calling for further attention to Sand Creek.

The United Methodist Council of Bishops and Commission on Archives and History are charged with authorizing a joint research team, including an independent body, to "provide full disclosure" of the involvement of Chivington, Evans, the Methodist Church as an institution and other prominent leaders of the time period. The team will bring a report back to the 2016 General Conference.

The Rev. Stephen J. Sidorak Jr., who helped lead denominational work on the Act of Repentance, believes it is of "no small importance" that church and university institutions are further investigating historical connections to Sand Creek.

"The key thing is that there seems to be a movement toward self-examination, accuracy in the historical record, culpability, if any, in terms of the institutions involved, and what it might mean for 'repentance,'" he explained.

"The trail of repentance is long and that of healing of relationships with indigenous persons will be even longer," he said. 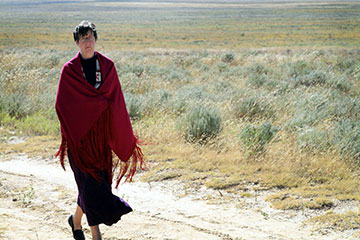 Chivington's role in the Sand Creek massacre is well known, but errors have persisted regarding his status within the church.

According to the Rev. Robert Williams, top executive for Archives and History, Chivington was ordained an elder in the Missouri and Arkansas Conference of the Methodist Episcopal Church in 1852 and in the early 1860s was a presiding elder (district superintendent) in 1860 for the Rocky Mountain District of the Kansas and Nebraska Conference.

Chivington was required to give up his membership in the Colorado Conference when he took a military command, but at the time of the massacre was still an ordained elder in the church. Six years after the massacre, he returned to Nebraska and was re-admitted to the conference "on trial," although he soon made his final disappearance from pastoral work.

The role of Evans in the massacre has received less attention. The Rev. George "Tink" Tinker, a member of the Osage Nation and professor at Iliff School of Theology, a United Methodist seminary, told the church about this "really fine Methodist gentleman" during the April 27 Act of Repentance worship service at the 2012 General Conference in Tampa, Fla.

"What you haven't heard yet is that Chivington's boss, the second territorial governor of Colorado, only months after being appointed by Abraham Lincoln, is the one who ordered Chivington to proceed against this peaceful Cheyenne village," he said.

Evans, Tinker declared, conceived "murder in his heart" by refusing to receive a delegation of Cheyenne peace chiefs, setting in motion a process leading to the massacre.

"See, that's the history that we've somehow got to deal with," Tinker told General Conference. "It's not just Sand Creek, but it's virtually every bit of the Christian conquest of North America."

As the Chicago Tribune reported in February, Northwestern University has set up a committee on Evans. The Native American and Indigenous Student Alliance at Northwestern contends that the university has ignored that part of Evans' history.

In a university news release, Provost Daniel Linzer noted that it was "appropriate" to do an assessment of Evans in light of the 150th anniversary. "Although Sand Creek occurred 13 years after the establishment of Northwestern, we would like to know in detail the nature of John Evans' relationship with the university when he was territorial governor and afterward," he said.

"As an educator, I believe this was a powerful example of how truth sharing can be transformative," she said. "My studies at Garrett-Evangelical (Theological Seminary) taught me that we carry the task of speaking the truth, and to do this well, we do not get to disregard that which makes us uncomfortable - this is why we continue to reinterpret Scripture and understand the context of our faith stories in community." 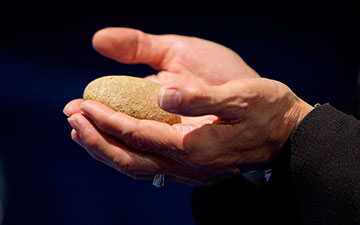 Participants in the "Act of Repentance toward Healing Relationships with Indigenous Peoples" at the 2012 United Methodist General Conference in Tampa, Fla., were encouraged to select a stone from the "River of Life" as a symbol of their continuing commitment to "listen and walk the journey of healing with one another." A UMNS file photo by Mike DuBose.

At the end of January, Stanovsky convened two meetings with representatives recognized by descendant tribes who interact on all matters related to Sand Creek.

"One of the facts about the massacre was that it was effective in exiting native people from eastern Colorado," she said, explaining that survivors ended up in Oklahoma, Wyoming and Montana.

The meetings included a half-day session with United Methodists and representatives of Iliff School of Theology, the University of Denver, the Denver mayor's office and Colorado governor's office "to just begin a conversation of just what an appropriate commemoration will be for the 150th anniversary." A second meeting was devoted to following up on the General Conference research petition.

Stanvosky said she has discussed with Alexa Roberts of the National Park Service about how the church's research project might dovetail with work being conducted at the site's own research center in Eads, Colo.

The University of Denver, a United Methodist-related institution, and Iliff have committed to collaborate with the research project, the bishop said.

She hopes the project will become the "definitive record" of Sand Creek for the denomination and help correct errors that have persisted about the massacre over the years. "It really is distressing to descendants of the victims that the descendants of the perpetrators get it wrong," she said.

The main role for the Commission on Archives and History is to make sure the study is adequately funded and fulfill any other requests for research, Williams explained.

"We want to get it as accurate and as complete as possible," he said. "Certainly, consultation with the descendants is critical."

Dissemination of the study's results also is important for the church. "We wouldn't just want to have the research done and have the people ignore it," Williams said.

The point of United Methodist research on Sand Creek is not to study the past for its own sake, he noted, but to obtain information that "will hopefully lead to improving the quality of life for all native people as we move into the future."

*Bloom is a United Methodist News Service multimedia reporter based in New York. Follow her at http://twitter.com/umcscribe. Anne Marie Gerhardt, director of communications, Northern Illinois Conference, contributed to this report.