More than 3,000 ministers gathered in the shadow of the Martin Luther King Jr. Memorial in Washington on Aug. 28 for the “Ministers March for Justice.” United Methodist clergy, from bishops to local pastors, were among those lending their voices, prayers and support.

Sponsored by the Rev. Al Sharpton-founded National Action Network, the march was designed to send the message that many clergy believe recent activities of the Department of Justice and the current administration are undermining the country’s democracy, organizers said. The march was expected to draw 1,000 faith leaders, but according to Sharpton, more than 3,000 clergy registered at the event.

The march, which occurred on the 54th anniversary of King’s “March on Washington” and his famous “I Have a Dream” speech, wound its way through the streets of Washington, ending at the Justice Department. Sharpton was joined by Martin Luther King III at the head of the march, along with faith leaders from several different traditions.

Dozens of United Methodist clergy from across the country participated, including Bishop Julius C. Trimble, who leads the Indiana episcopal area.

Speaking during a Facebook Live session at the United Methodist Building before the march, Trimble said that he came all the way from Indiana because he’s committed to being “a harbinger of hope.” 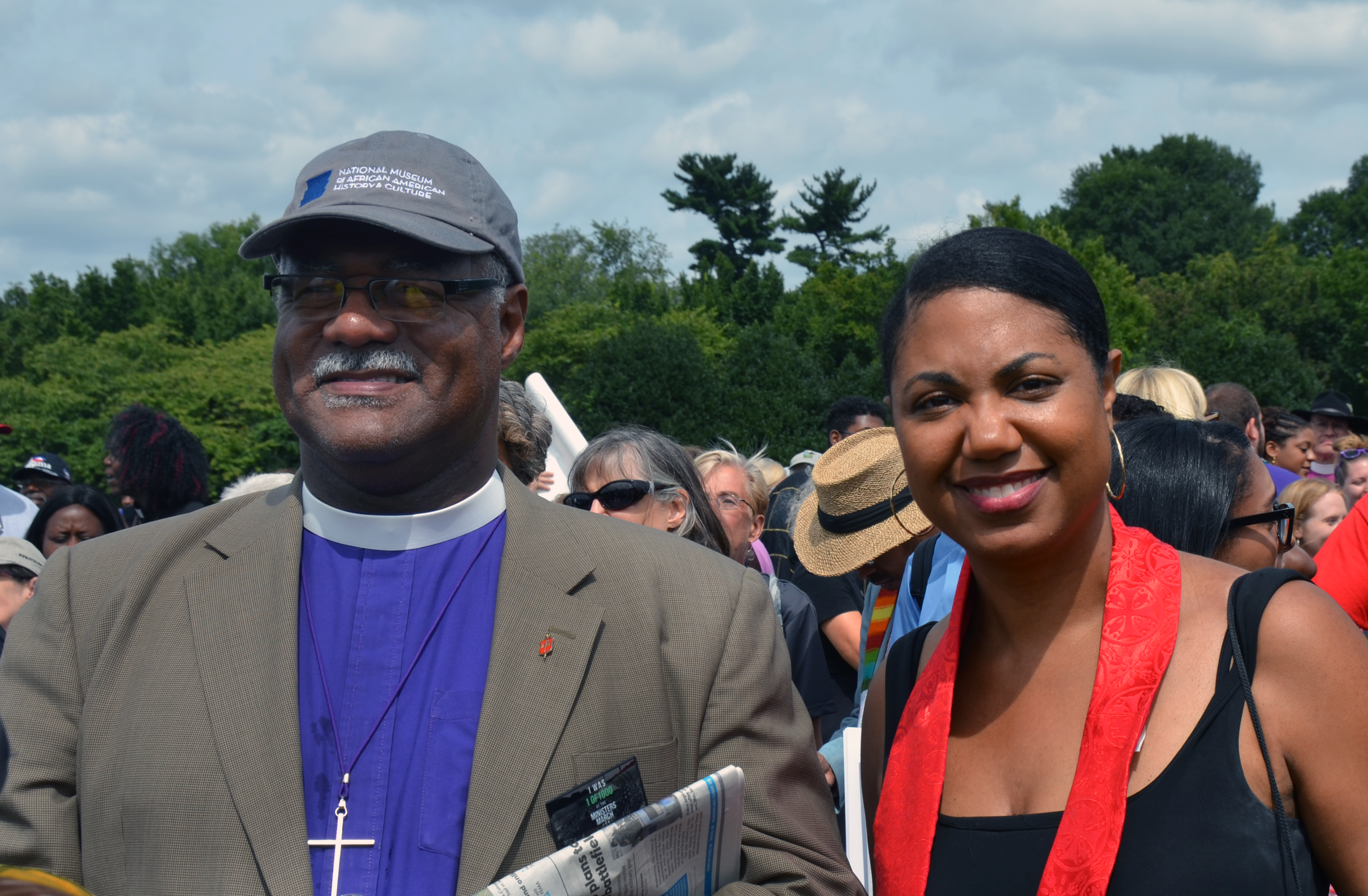 Indiana Area Bishop Julius Trimble with the Rev. Stacey Cole Wilson, director of Congregational Excellence and Strategic Partnerships for the Baltimore-Washington Conference. Both took part in the “Ministers March for Justice on Aug. 28 in Washington. Photo by Erik Alsgaard, UMNS.

Trimble, who entered the ordained ministry from a small church just outside Chicago, was steeped in the Methodist tradition of personal holiness and social justice.

“We cannot afford to live in a time when the clock is being turning back on the progress that has been made since 1963,” he said. “We can’t afford to go backwards in the area of voting rights, jobs for all people, hospitality for immigrants, racial justice. We can’t go back on areas of critical conversations on race that are needed for this time.”

The bishop, who was 9 years old when the 1963 march took place, said that lay people and the pastor of the church he attended at that time were in Washington to see and hear King.

“Now I’m marching because I want my children and grandchildren to have a better world,” he said, “and that we might take steps closer to that ‘beloved community’ that Dr. King talked about so much.”

As the march was unfolding, another group of clergy met in Washington with similar goals but with different tactics. According to reports in the Washington Post, many of the clergy who gathered at the National Press Club for a news conference serve on an advisory board for President Trump.

The Washington Post reported that Bishop Harry Jackson, senior pastor of Hope Christian Church in Beltsville, Maryland, and who also serves on the president’s “informal evangelical advisory board,” criticized the “hypocrisy” of Sharpton’s march. “If I want to talk to you, I don’t march down the street to ‘talk’ to you, if you really want access,” he said.

Two pastors, the Washington Post reported, joined the marchers after the event: the Rev. Frank Amedia, founder of a group called POTUS Shield, and the Rev. Mark Gonzales.

“That’s our meeting point, changing the nation,” Amedia was quoted as saying. “We may not agree on how we get there.”

“We have a statement in our Social Principles that is important to remember,” Henry-Crowe said. “United Methodists say that ‘racism, manifested as sin, plagues and hinders our relationship with Christ inasmuch as it is antithetical to the Gospel itself.’” 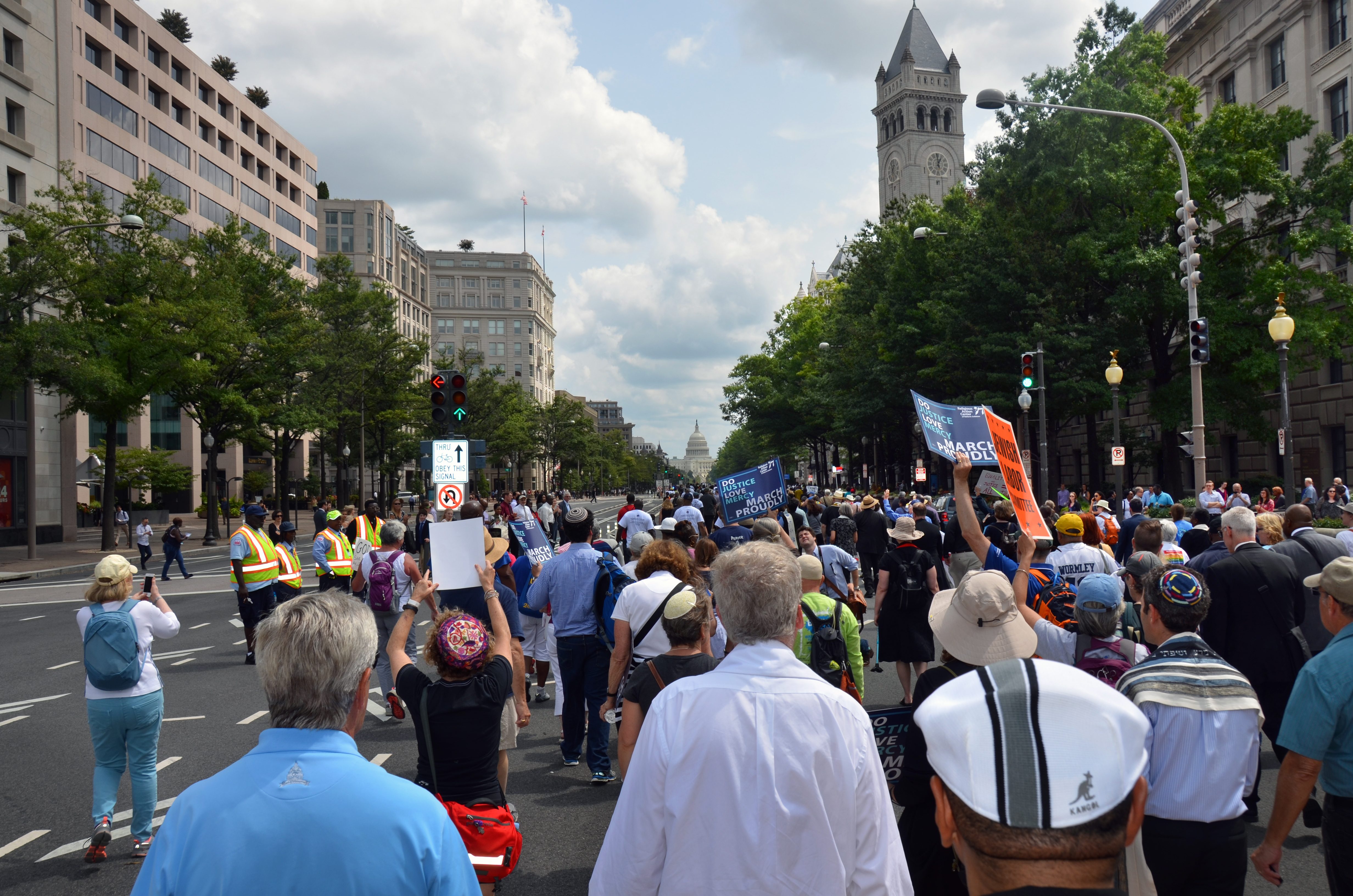 More than 3,000 ministers marched down Pennsylvania Avenue in Washington during the “Ministers March for Justice” on Aug. 28. Photo by Erik Alsgaard, UMNS.

Part of the work of the board, she said, is educating congregations about the denomination’s stance on racism, and the work it is doing to eliminate it. She said one step local churches can take to combat racism is to build relationships.

“Being in touch with communities around them, whether they are churches or other community organizations, to sit and talk together about what are the experiences of life in this community,” Henry-Crowe said. “Have dinner together, have conversations together, have prayer together, and be together with one another in new ways.”

Matthews, who said he was in high school when the 1963 march happened, remembers praying for the marchers.

“As United Methodists, we continue to urge all of our members to make sure that we pray for justice to be done throughout this great land of ours,” Matthews said. “I look forward to being a witness, because we are living in a critical time.”

For example, Matthews said, things are happening today that he thought he’d never see again in his lifetime. Born and raised in South Carolina, Matthews said the events of Charlottesville brought back memories of seeing torches and the burning of a cross.

Racism, he said, is still the “unfinished agenda” not just in civil society, but in the church.

Jim Winkler, a United Methodist who serves as the president and top executive for the National Council of Churches, comes from a long line of Methodist clergy. He was marching, he said, for both personal and professional reasons.

“I’m committed to keeping the dream of Martin Luther King alive,” he said. “And, as head of the National Council of Churches, there are a lot of our churches here … out in force today, to say ‘no’ to any roll-back of voting rights, health care, and economic justice. We’re here to stop the Klan, white supremacy and white nationalism from rearing their ugly head again in our nation. In the name of Jesus Christ, we’re here.”

Part of the work of the council, Winkler said, is that they will soon begin a truth and reconciliation process for local churches.

The goal of the process, he said, was to get at the roots of our racism so that “we can overcome this horrible history.”

Church leaders from throughout the United States, he said, will be invited to come to Washington next April to begin the process, complete with a rally on the National Mall.

Alsgaard is managing editor in the Ministry of Communications for the Baltimore-Washington Conference. News contact: Vicki Brown, 615-742-5472 or [email protected]