United Methodists are helping neighbors cope with fire, rain and floods, strong winds and a blistering heat wave as the summer of 2012 continues to cause misery. Here is some of what people have done to help others:

Rescues in the Great Smoky Park

Four miles from the entrance to the Great Smoky Mountains National Park on a busy July 4th holiday, Tuckaleechee United Methodist Church in Tennessee took in vacationing campers after violent thunderstorms swept through the popular tourist spot, killing two people and injuring several others on July 5.

Some church members, who are also part of the Townsend Volunteer Fire Department, were involved in clearing roads, searching for and freeing trapped people, and finding a place for the vacationers to stay until the park opened the next day, said the Rev. Kristie Banes, pastor of Tuckaleechee United Methodist Church.

"It was very much a crisis situation," Banes said. "Really, what we provided was hospitality, to allow people to come in out of the storm and heat."

Many churches opened their air-conditioned doors as hundreds of thousands lost electricity after intense storms.

In Galax, Va., Mount Olivet United Methodist Church provided free lunches July 1-2 to community members suffering from the severe heat and power outages. They got out the word the traditional ways but also used social media to communicate their doors were open.

Facebook, text messages, a prayer chain, word of mouth and the church's front lawn marquee were used to let people know the church was open and had free food, said the Rev. John Grimm, pastor. 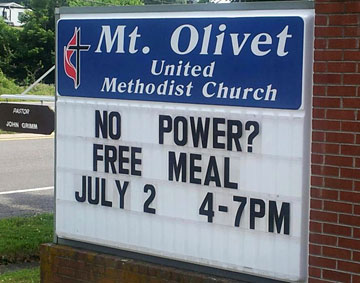 Aldersgate United Methodist Church in Sissonville, W.Va., was also offering air-conditioning and hospitality to some of the nearly 160,000 West Virginia customers without electricity. The Rev. Brad Bennett said the recently completed kitchen and gym made it possible for them to provide about 160 meals a day and give nine people a place to sleep.

Bishop William Boyd Grove of the West Virginia area sent a letter of comfort to those suffering in homes without power.

"We are experiencing again, as we always do in times of widespread suffering, the strength of our United Methodist 'blessed connexion,'" he wrote. "Local congregations are in ministry to neighbors, offering cool shelter and food and companionship. I am so proud of our pastors and our churches!"

An example of that hospitality came in popsicles and cool bottled water offered by the Rev. Mark Doane and members of his congregations in Centralia, Ill., who handed out 16 cases of water during 105-degree heat.

Pat Henderson, the disaster relief coordinator for First United Methodist Church in Live Oak, said 22 people in the congregation have donated 546 ½ hours of volunteer work since the storm on June 26.

"It is a disaster," she said. "Young and old have lost everything, but everyone is helping."

Finnin said the church was starting to move into the second phase of assessing damage after they helped distribute more than 1,000 flood buckets.

"If anyone wants to help they are welcome to drop by First United Methodist Church of Live Oak, 311 South Ohio Avenue, Live Oak, Florida!"

Members of Wilson United Methodist Church were featured in a news report by The Gazette in Colorado Springs because the church was one of the most visible survivors of the June 26 firestorm that hit Waldo Canyon, Colo.

On July 8, the worship service was conducted outside, where more than 150 gathered to thank God for their blessings.

"Some of us confused and anxious, some of us clinging to a thread ....we ask You to meet us right here today," the Rev. David Hiester prayed, standing on a flatbed trailer that served as his temporary pulpit outside.