The Rev. Bob Edgar, a United Methodist pastor and a "tireless defender of the poor and an advocate for justice," died unexpectedly April 23 of a heart attack at his home in the Washington area. He was 69.

Edgar, who was top executive of Common Cause, is the former top executive of the National Council of Churches and a former six-term member of Congress from Pennsylvania. He was president of United Methodist-related Claremont (Calif.) School of Theology from 1990 to 2000.

Jim Winkler, top executive of the United Methodist Board of Church and Society, was a close friend and colleague.

"Bob Edgar was a close personal friend of mine. I cannot believe we have lost him. He was a great servant of Christ, possessor of a magnanimous and positive personality, and a faithful United Methodist. Those of us who knew him have been sharing our sadness and our fond memories of him all day."

'Tireless defender of the poor'

"Bob was a valued friend, social progressive and committed Christian leader," said the Rev. Larry Hollon, top executive of United Methodist Communications. "He brought a wonderful sense of humor to any gathering in which he was present. He was a tireless defender of the poor and an advocate for justice. His voice will be missed." Edgar was a former member of United Methodist Communications' governing board.

Edgar became top executive of Common Cause, a national advocacy group with more than 400,000 members and 35 state organizations, in 2007. While there he "oversaw the relaunching of at least seven state chapters, traveled tirelessly to meet with and recruit Common Cause supporters, and raised the organization's national profile and its critical mission to strengthen our democracy," Common Cause said in a news release announcing Edgar's passing.

"We are deeply saddened and shaken today by the passing of Bob Edgar," said Common Cause board chair Robert Reich. "Bob will be remembered for his decency, kindness, compassion and humor. His deep commitment to social justice and strengthening our democracy is his greatest gift to Common Cause and the nation. Our hearts are with Bob's family, his wife Merle, and sons Andrew, David and Rob, and their families."

Edgar led the National Council of Churches for four terms from 2000 to 2007. He brought the council, which now has several million dollars in reserve, through a financial crisis and initiated a major campaign against poverty.

In 2006, he wrote "Middle Church: Reclaiming the Moral Values of the Faithful Majority from the Religious Right," published by Simon & Schuster as a wake-up call to restore America's moral values.

While depictions of sex and violence on television are a measure of morality, so are "hunger, illiteracy, disease, war and environmental degradation," he wrote. 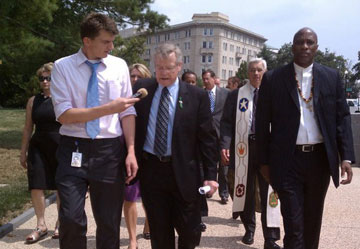 The Rev. Bob Edgar (center) walks to the U.S. Capitol to raise his voice on behalf of the poor and vulnerable as Congress debates budget cuts in this 2011 file photo.
A web-only file photo courtesy of Common Cause.

'Faithful majority must have the courage'

As Edgar defined it, the "Middle Church, Middle Synagogue, Middle Mosque" that he addressed in the book represent "the many millions of faithful people who do not always connect their spiritual values with political issues and whose voices are, as a result, often drowned out by the far religious right.

"This faithful majority must have the courage to confront their government when it makes bad decisions and have enough confidence in their own judgment not to believe unquestioningly the 'expert' political leaders, who most Americans assume know more than they do," he wrote in the preface.

The Rev. Cynthia Abrams, a director with the Board of Church and Society, said she and her father graduated from Claremont together while Edgar was president.

"All through seminary and in our frequent interactions here in D.C., he has always been a mentor and friend. He was also a great friend and supporter to Native Americans, supporting the move and re-establishment of the National United Methodist Native American Center at Claremont," she said.

The Rev. Don Messer, director of the Global AIDS Fund and former seminary president of United Methodist Illiff School of Theology, remembered Edgar for his "warmth and wit and puns" when they served together as seminary presidents.

"Courageous, compassionate, and prophetic, he dared to speak the truth in Washington these days as president of Common Cause. His leadership in The United Methodist Church and the National Council of Churches as well as the United States Congress was remarkable," Messer said.

"As we finished and said our goodbyes, I recall watching Edgar, marveling as he purposefully bounded away down University Avenue, on to the next conversation about the big problems with electoral politics in 2013 America."