Tracing a "shared journey of faith," a United Methodist committee is calling on the denomination to more fully embrace the church's counterparts in Latin America and the Caribbean.

The request came during an April 26 presentation by the General Conference Study Committee on the Relationship between The United Methodist Church and the Autonomous Methodist Churches in Latin America and the Caribbean. Delegates will vote on the committee's report and recommendations.

General Conference participants sang a song in Portuguese, Spanish and English that included the lyrics "your voice is very important," as representatives of the Latin American/Caribbean churches ascended the stage.

United Methodist Bishop Elias Galván offered a condensed history of Methodist growth in the region, beginning with a congregation formed by slaves in Antigua in the 1760s. Gradually, indigenous leadership replaced the missionaries, and in 1924, the first central conference of the entire region met in Panama.

For differing reasons, the Methodist churches in Mexico and Brazil became autonomous in 1930. But the real surge for independence occurred in the 1960s, he said.

Latin American Methodists were not trying to break all ties with the U.S. church. But the political result, according to Galván, was that the churches gaining autonomy from 1964 to 1970 "were left without a connectional link to each other. These churches did not choose to leave the connection; the connection left them."

Although some relationships have continued through the Council of Evangelical Methodist Churches of Latin America (CIEMAL) and United Methodist agencies and U.S. annual (regional) conferences, a better connection is needed. It is the committee's hope, Galván said, that General Conference delegates "will take the first steps on a new path for building stronger relationships for the future."

Bishop Minerva Carcaño, the committee's chairperson, pointed out that while U.S. United Methodists have been generous in their support, they don't always know how to relate to churches in less-developed countries. 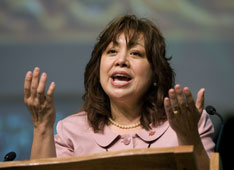 United Methodists in the United States "too easily believe that we have all the answers," says Bishop Minerva Carcaño of the church's Phoenix Area.

At times, she added, church members have allowed the political situation between the United States and other countries "to define and direct our relationships with our brothers and sisters in the South."

As part of a dominant culture, U.S. United Methodists "too easily believe that we have all the answers &ellipsis and we must be the initiator of every plan and every good work," Carcaño said.

She asked that delegates approve the committee's report and recommendations as a way to refine and deepen these connectional relationships and offer a "clear moral voice" for people in the Latin America/Caribbean region.

The committee's first recommendation is to "affirm a mutuality in mission," recognizing the need to cooperate on issues ranging from evangelization to sustainable development. A Committee on Connectional Program would meet once every four years, with representatives from The United Methodist Church, CIEMAL and the Methodist Churches of the Caribbean and the Americas.

In addition, an ongoing exchange of visits of leaders and direct church-to-church and conference-to-conference relationships is encouraged to "facilitate a better understanding of the realities of each mission partner's context of ministry and mission."

The second recommendation is to improve communication by working through official lines of authority of the church bodies involved, linking to each other's Web pages and translating all General Conference documents into Spanish and making them available to delegates whose language preference is Spanish.

The third recommendation focuses on finding a balance in "mutual programs of evangelization and diakonia" by joining together as "a prophetic voice in the face of the multiple social justice issues" in Latin America and the Caribbean, particularly for injustices effected in some way by the U.S. government.

*Bloom is a United Methodist News Service writer based in New York.