The Standing Rock Sioux Tribe, based in North Dakota, organized the Native Nations March. The tribe and other pipeline opponents have argued in federal court that the pipeline crosses sacred land, was approved by the government without adequate consultation, and would contaminate its water supply.

Construction was halted on the pipeline in September 2016, but Trump’s executive order Jan. 24 reversed that and allowed construction to proceed. On March 7, a federal judge denied a request by the Standing Rock Sioux and Cheyenne River tribes to halt construction of the final piece of the Dakota Access Pipeline.

Dozens of United Methodists started the protest March 10 at the United Methodist Building on Capitol Hill. Later, they walked through rain and snow to join the full march, which ended at the White House. Along the way, a teepee was erected in front of the Trump International Hotel on Pennsylvania Avenue. Demonstrators carried signs and chanted “water is life” as they marched. 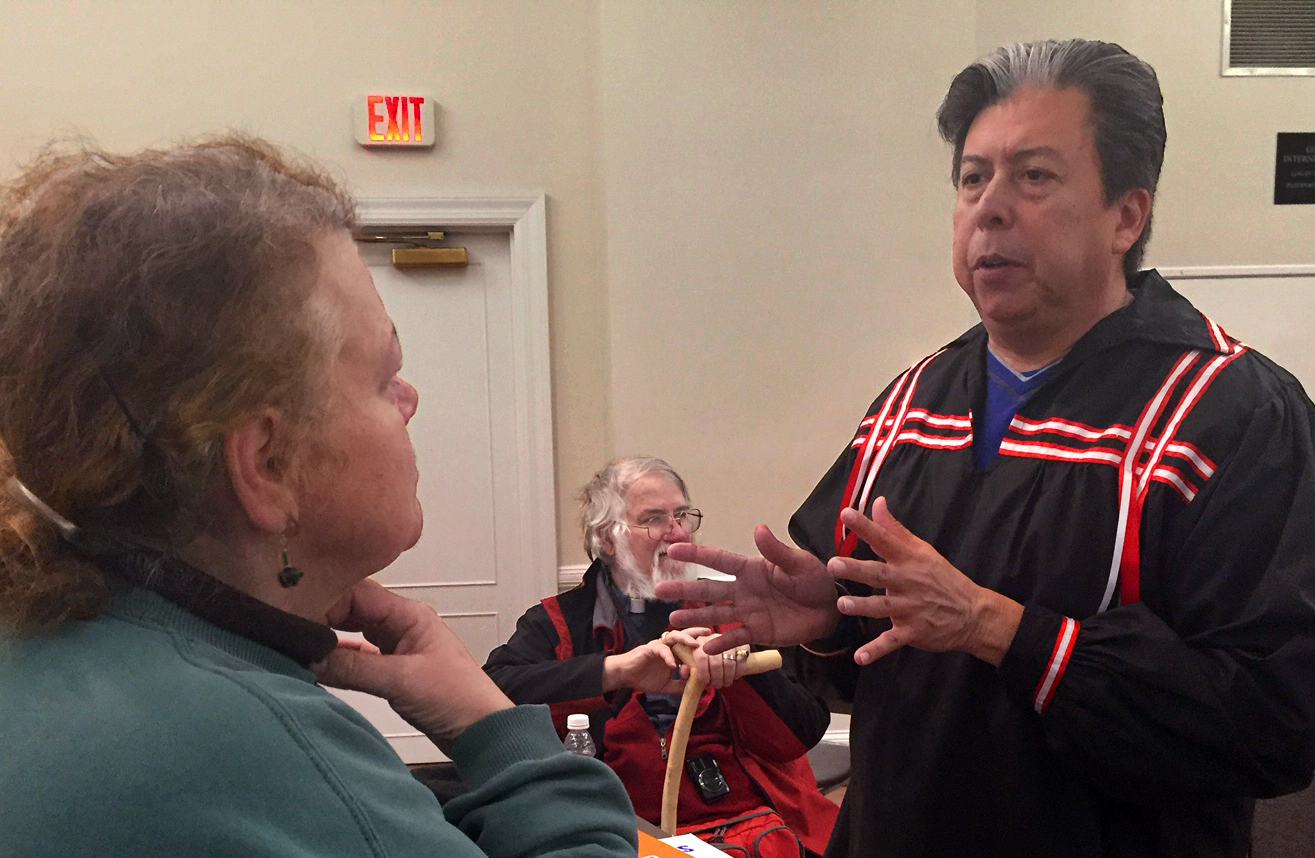 The Rev. David Wilson, superintendent of the Oklahoma Indian Missionary Conference, greets participants at the Methodist Building before the march. Photo by Erik Alsgaard, UMNS.

The Rev. David Wilson, superintendent of the Oklahoma Indian Missionary Conference, greeted participants at the Methodist Building before the march. He said that his conference has been working with protesters since last August, providing support during the nearly year-long encampment with supplies and money. Wilson himself visited Standing Rock seven times.

The United Methodist Board of Church and Society worked with the Oklahoma Indian Missionary Conference to help with logistics — allowing march organizers to use their building and helping to make connections with their constituents and area United Methodists, said Wilson.

In addition, the United Methodist Commission on Religion and Race provided funds to help with a March 9 evening meal for 500 people from the Standing Rock Reservation at the National Cathedral in Washington. The Baltimore-Washington Conference also assisted with the meal and other logistics.

The issue, from Wilson’s point of view, is protecting one’s homeland.

“Most Native people are very connected to their homeland,” Wilson said. “And the piece where the pipeline goes is, although it’s not a part of the reservation, it’s original land given to them by the treaties. This is a big issue that the government has been ignoring.” The treaties, Wilson added, go back to the mid-1800s.

Standing Rock people are resilient people, Wilson said. “They get knocked down and get right back up.” The march, he said, like the now-disbanded encampment, is an attempt to get the world to see the larger picture.

The Rev. Jimmy Oxendine travelled to Washington from Shannon, North Carolina. He came to show support for our “Native brethren,” he said.

“I think we, as a group of Americans, whether we’re Native or not, should hold sacred lands high and holy,” Oxendine said. “We need to stand as one to speak out against that which we think is wrong.”

Oxendine came with three other clergy from North Carolina, including the Rev. Terry Hunt, leadership team coordinator for the North Carolina Conference.

“I’m here to stand for the injustices that are being inflicted upon, especially, the Standing Rock community,” Hunt said. “But that impacts all Natives and people of color all over this country.”

Hunt said he is upset that the government can come in to sovereign lands and refuse to honor any of the treaties.

“Pursuing the almighty dollar is more important than people’s health and their rights,” he said.

Doris Cooper, a member of the Lanape tribe in Delaware, awoke at three o’clock in the morning to make it in time to the protest. She came along with several of her cousins, she said, to help “save the water; we strongly believe in it.”

A member of Mt. Zion African Methodist Episcopal Church in Dover, Cooper said her church has been active in learning and advocating on behalf of the Standing Rock tribe.

Accompanying Cooper was Joyce Robins-Brown, also a member of the Lanape tribe. This was her first protest march.

“I am happy, happy, to be here,” she said. “This is what we talk about every month in our meetings, about the Dakotas. We talk about the pipeline and what the world is doing to them. I think it’s unfair because the land belongs to us.”

Wilson said that he is grateful for the support fellow United Methodists have offered the Oklahoma Missionary Conference, including prayers, monetary gifts and calls of encouragement. He said that local United Methodist churches can help now by raising awareness of the issues and educating themselves about what is really at stake, he said, “not just for Standing Rock, but in the future.”

According to Wilson, Standing Rock isn’t the only location where pipeline construction is a problem.

“Unfortunately, while this is happening to Standing Rock, it will happen again,” Wilson said. “In Oklahoma, there’s a pipeline going from a refinery to the eastern part of the country. There are people in Oklahoma opposing that. The irony is, the area where the pipeline is going is prone to earthquakes.”

“The church has been engaged in Acts of Repentance towards Native people,” Wilson, writing about the march, posted on the Missionary Conference’s website. “Now is the time to show the world our desire to be in solidarity with Native peoples in this country.”

United Methodists alternately expressed fear and contentment with the U.S. Supreme Court decision released June 24 that holds there is no longer a federal constitutional right to an abortion.
Church History

An Oklahoma church and a public charter school are focused on teaching Native youth about their culture and equipping them to thrive.