More than 200 people gathered at an interdenominational prayer for peace Aug. 5, organized by the Zimbabwe Council of Churches in the wake of post-election violence in the country.

The prayer meeting, held at St. Mary’s Anglican Church, was attended by several mainstream churches and focused on praying for the country and its leadership.

Washington Gurure, 74, a United Methodist, commended the Zimbabwe Council of Churches for organizing the multidenominational gathering.

“This is a good thing. Let us all spread the message of peace to our neighbors. If people take heed, God will surely hear our prayers,” he said.

The July 30 elections, the first presidential election since the ouster of President Robert Mugabe last year, were largely a contest between the ruling ZANU (PF) party, which won 145 of the 210 parliamentary seats, and the Movement for Democratic Change (MDC) Alliance, which won 63 mainly urban constituencies.

Current President Emmerson Dambudzo Mnangagwa scraped by with 50.8 percent of the presidential vote, against MDC Alliance Nelson Chamisa’s 44.3 percent. Mnangagwa was declared the winner by the electoral body.

Violence erupted in the streets of Harare Aug. 1 as suspected opposition party members accused the Zimbabwe Electoral Commission of delaying the announcement of presidential election results and rigging the polls in favor of the ruling party.

Six people were killed when the army fired live rounds at protesters who burned vehicles, stoned shops and destroyed other property. The government security agents have since been roundly condemned for the use of excessive force. 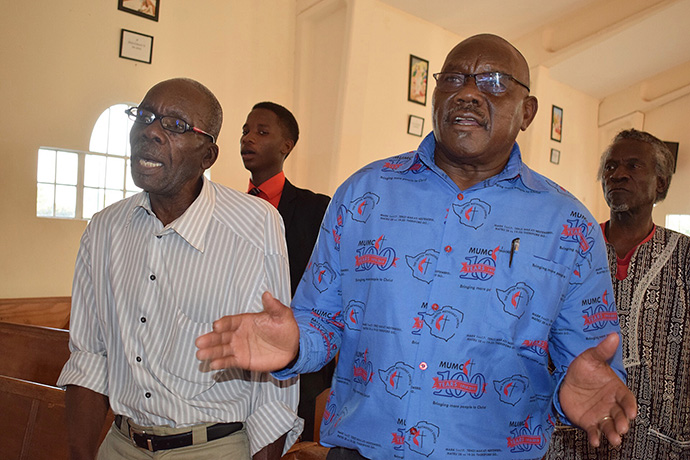 Stephen Gurupira, 64, a United Methodist who attended the prayer gathering, said it was important to pray for the politics and economics of the country.

“We have educated children who have failed to get employment. These prayers will help revive the thinking of our leaders and restore hope to our nation,” he said. “Everyone must see the importance of peace. Such prayers are necessary to heal the wounds in our country.

“It is important for everyone to forgive and unite. I believe the interdenominational prayers should be held more frequently. They will help to redirect the way our leaders think,” Gurupira said.

United Methodist bishops and other church leaders also called for prayers for peace in the wake of last week’s violence.

St. Mary’s pastor, the Rev. Norman Nyawo, said the gathering was organized for all churches affiliated with the Zimbabwe Council of Churches to pray for peace in the nation.

“Before the polls, we had a call for peace by government and civic organizations. The elections were peaceful but we experienced disturbances in Harare after the announcement of results, which culminated in unnecessary loss of lives,” he said.

“There is still need to continue praying for physical and emotional peace, the way we conduct ourselves and the gestures we use for communication,” said Nyawo.  (In Zimbabwe, the clenched fist is associated with the ruling party, while the open palm is the symbol for the main opposition alliance.)

“We may have different political affiliations but we still remain neighbors. We cannot run away from politics but we have to be mindful of how we put across our different opinions,” he said.

The prayer gathering was marked by worship, mass prayer and calls for God to grant peace and prosperity to the country and wisdom to the nation’s chosen leaders.

“I am hopeful this initiative to pray for our country and our leaders will be a success.  Personally I will try and influence my friends to spread this message,” Gurure said.

The MDC Alliance has said it will contest the presidential and about 20 parliamentary election results in court. The Zimbabwe Constitution allows seven days for election results to be contested in court after which the declared winner will be inaugurated if there is no challenge.