United Methodists used poetry and music at a Lenten event to decry the killings of 14 farmers — killings that Davao Area Bishop Rodolfo A. Juan and other church leaders also have condemned.

John Wesley Academy and Critical Thinking Center of the Middle Philippines Conference staged the gathering, which was attended by more than 100 students, seminarians and teachers from Wesleyan University-Philippines. The group listened to music and poetry that spoke to the injustice of the killings.

Human rights and church groups called the killing of 14 farmers by police a massacre of farmers who were simply asserting their rights to land. Police contend the men shot at officers with search warrants for illegal firearms, and that officers then shot back, reported ABS and CBN News. The government claims the March 30 incident in Negros Oriental province was part of legitimate operation against suspected communist rebels.

Bishop Juan called on government leaders to “put a stop to this purging rampage. Let justice and peace flow like a spring!

“The cruel and senseless killing of the farmers in Negros is a big sin against humanity, considering the fact that the Philippines is predominantly a farming community.”

The Filipino church group said the justification given by authorities was similar to that authorities used to justify the anti-drug killings. “We embrace in prayer and solidarity the families of the victims, as we join the call for a thorough and independent investigation,” the statement said.

The World Council of Churches also renewed its call for the government of the Philippines “to end the culture of impunity and to ensure full investigation and accountability for all such killings.” 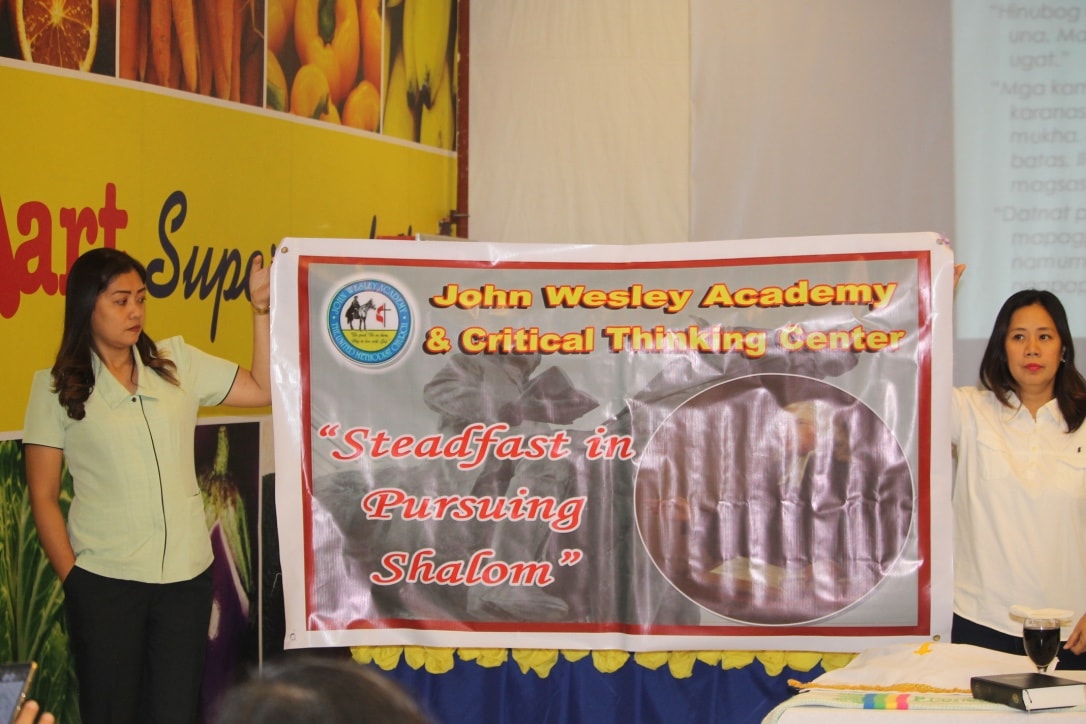 Lorelei Razon-Bueno (left), a member of Baloc United Methodist Church, and Lucille Grace Hilario, Middle Philippines Conference lay leader and director of connectional ministries, hold a banner as a statement from John Wesley Academy and Critical Thinking Center is read aloud at a Lenten event to decry the killings of 14 farmers in the Philippines. Photo by Gladys Mangiduoys, UMNS.

Pastor Julius Fernandez, a pastor from the Davao Episcopal Area, said the Lenten event was a way to proclaim the deepest inward sympathy to the victims of inequalities, injustice and violence.

“And as church people, we must be vigilant and serve as catalyst of change of all profanities in the society,” he said.

Pastor Daffodil Cabales, a Wesley Divinity School student from the Davao area who attended the Lenten event, said everyone has a duty to stand against violence.

“Amid these senseless killings and all other forms of violence and exploitation we experience as a nation, the church cannot afford to remain silent,” he said, adding that defenseless people have been killed and deprived of their right to live a peaceful life.

“They are the faces of those other people who experience the same cruelty by those in power.”

Pastor Benjamin M. Caboles Jr., a seminary student from the Baguio Episcopal Area, said the event allowed him to voice his emotions and sympathy to the victims of violence.

“This gig amplifies even my strongest encouragement for everyone to become a man or woman of valor, to fight against all kinds of inequalities, injustices and violence,” he said.

“We are in solidarity with the families in crying out for justice. We denounce the killings. We are calling the attention of the Armed Forces and the National Police to respect every human being,” Bustria said, adding that the conference calls for law officers to exercise prudence, reminding them of “their duties to protect the ordinary citizens, like the farmers.”

A statement from John Wesley Academy and Critical Thinking Center was adapted from the United Methodist Social Principles and read aloud at the event.

“In the love of Christ, who came to save those who are lost and vulnerable, we urge the creation of a genuinely new system for the care and restoration of victims, offenders, criminal justice officials and the community as a whole,” the statement said.