A team of United Methodist health workers arrived in this village near Bo during the rainy season. The clouds battled to keep the sun from shining. The sun occasionally beat the clouds and peeped through the “sky windows” to send warming rays.

“Awao! Awa!” (“Come on! Come!”) Mohamed Goma, the village head, called as a teenager repeatedly hits an old suspended railroad metal that serves as a bell to call the community. “Bring your own seats,” Goma said, Because the small village community hall lacks enough seats for all attendees, people are encouraged to bring their own.

Slowly, the small community hall fills up. Pregnant women, nursing mothers, men and children arrive, some with benches. Others sit on mud bricks in the corner of the hall.

The meeting began the process of engaging the community with health workers who are assessing needs for a newly approved community-based healthcare program funded by Curamericas Global in eight villages in the Bo District. The new program uses home visits, health education and care groups to monitor health and ensure care.

Curamericas is a nonprofit public-health organization dedicated to improving the overall health and well-being of mothers and children in some of the world’s most remote communities. The non-profit focuses on education, prevention and establishing relationships with existing health facilities in areas with desperate need.

During the summer, the health care workers familiarized themselves with target communities in the district, mapping the area and identifying health needs. 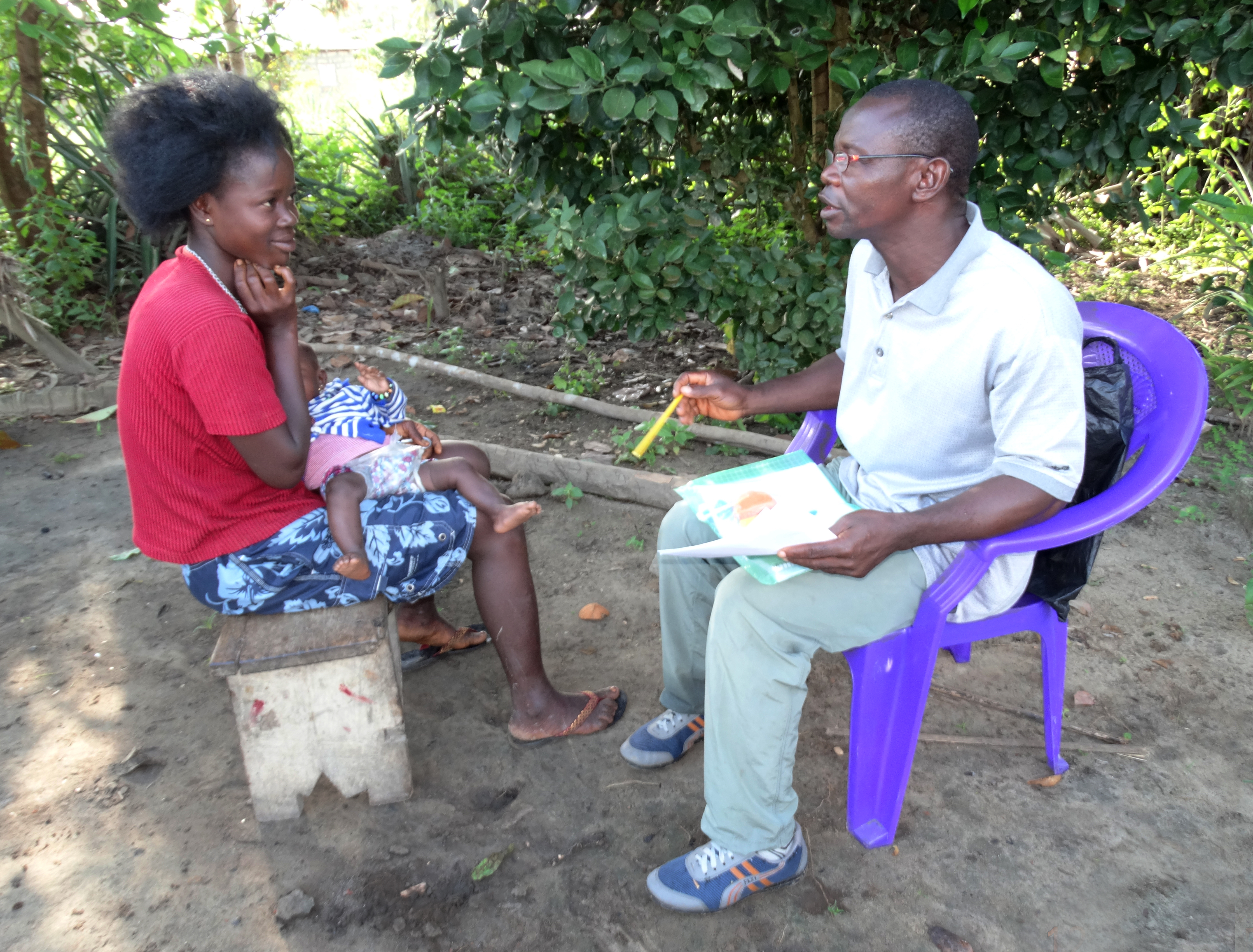 Josephine James cradles her 6-month old daughter while answering questions about her pregnancy for a survey conducted by Alfred Moiforay. The survey gathered information on health in target communities before the Kuimei Project. Photo by Phileas Jusu, UMNS.

They repeated the process in seven other remote target communities in the Bo District to get first-hand primary healthcare information.

The project – called “Kuimei,” meaning “mother” or “one who cares” in the local Mende language – launched in September in Bo.

Beatrice Gbanga, the Sierra Leone Conference medical coordinator, said the project is mostly for mothers and under 5 children. But she said that in Liberia it had a “spillover impact on the health of the communities as a whole.” Gbanga added that communities in Bo are eager to see how it will transform lives.

“It is going to help change the behavior of our people toward their health,” Gbanga said. “It is also going to empower them to be part of decision making; [to] be part of implementation of their healthcare programs.”

Baseline surveys for the project, in progress in eight target communities, will also measure impact once it is fully underway.

The International Business Times of the United Kingdom said the WHO report found that of the 40 countries with the highest maternal mortality rate in 2013, Sierra Leone was estimated to have the highest, with 1,100 maternal deaths for each live birth. “Many initiatives are being carried out in the country in order to reduce the risk of maternal death,” the Times reported.

Although Ebola, which took a huge toll on the population, is now subsiding, the country still faces more health challenges. Nearly 4,000 have died from Ebola in Sierra Leone and this past week marked the first week with no Ebola cases since the outbreak began.

The people of Kalia Village, one target community, said the project could not have come at a better time, since the community was the hardest hit by Ebola in the Bo District. The village became an Ebola hotspot when a local, revered Islamic cleric died of the disease. Knowing little about Ebola at the time, the villagers washed the corpse and rubbed the bathwater on their foreheads, believing it would make them as wise as the Muslim cleric who died. Many adults who rubbed the bathwater died as a result, leaving behind scores of Ebola orphans.

Since 1983, Curamericas Global has worked in Latin America, the Caribbean and Africa. Recent and current projects were in areas in Guatemala, Haiti and Liberia that have some of the highest child and maternal mortality rates in the world. Traditionally, these high mortality statistics come from rural or semi-urban communities. Preventable diseases such as malnutrition and pneumonia as well as complications from childbirth can lead to death in areas with limited health-care access.

The hope is that launching the program in the rural communities of Bo will reduce Sierra Leone’s high maternal and child mortality rates in those areas.

Curamericas Global uses a community-based, impact-oriented methodology that has proven adaptable to diverse settings and drastically reduces maternal and child mortality rates by combating the causes of death specific to an area. It also allows local health workers to identify and treat preventable medical conditions and measure outcomes accurately within their communities.

The three primary ways for reaching target populations with health promotion and other primary healthcare services are:

Jusu is a communicator for The United Methodist Church in Sierra Leone.