Nine people have died and thousands of homes and buildings have been destroyed, including five United Methodist schools, two local churches and pastoral homes, after heavy rains and flooding in the Uvira District of Kivu.

To make a donation to the The United Methodist Committee on Relief's International Disaster Response, use Advance #982450.

A 52-year-old widow, who leaves behind 11 children, also died, along with four members of the same family from the Songo neighborhood.

Dikete Yale, coordinator of United Methodist schools in Kivu, said four primary schools (Senga, Suki, Walo and De La Montagne) and a secondary school (De La Montagne) were destroyed by flooding. He said school officials are forced to look for houses to rent for the children to finish the school year.

He sent a cry of alarm for “any person of good will to help these schools so that these children can end the school year in goodness.” 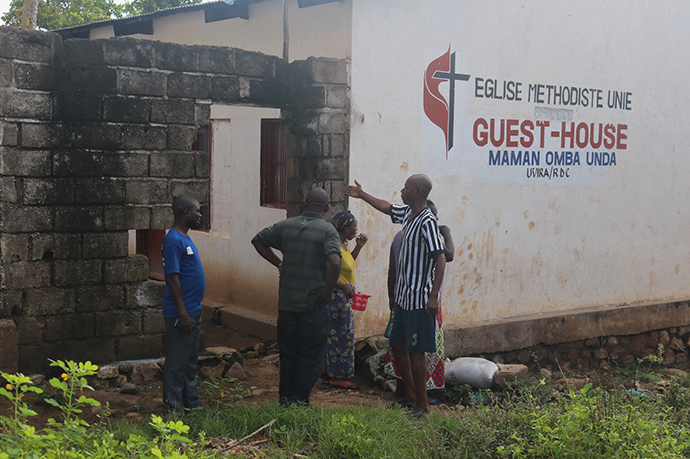 Two United Methodist churches in Kasenga and Kiliba also were destroyed. Balaganire said he is concerned about where church members will worship. The Kasenga church counts 345 faithful and Kiliba has an average of 285 people in attendance each Sunday.

Balaganire said the church has begun to guide some victims to neighbouring churches and schools, but the most urgent needs at the moment are to find tarpaulins, sheets, food and medicine for those displaced by the flooding.

He said there are families who are spending the night under mango trees and others sheltering in nearby churches.

The pastoral houses at New Jerusalem and Kasenga United Methodist churches also were destroyed, and the Omba Unda Guest House of United Methodist Women in Uvira was damaged by the flooding, said Mother Rose Nabintu, manager of the guesthouse.

“I can no longer do my small businesses between Uvira and Burundi because of these floods because the road is cut between the two countries at the border,” she said.

Kingombe Kazamwali, lay chief of the Uvira District, said that in addition to the deaths and material damage, there are many wounded.

“Among the wounded we have the lay head of the Makobola (United Methodist) Church with all his family who are interned at the Makobola hospital, and two Methodist women from Kasenga who are attending the care at Uvira Methodist Hospital.”

East Congo Bishop Gabriel Yemba Unda has been sympathetic to all the victims of this calamity and has appealed to people of good will to assist the survivors.

Kituka Lolonga is a communicator in the Kivu Conference. News media contact: Vicki Brown at (615) 742-5470 or [email protected] To read more United Methodist news, subscribe to the free Daily or Weekly Digests.

The newly dedicated Amani United Methodist Church is the 33rd church to be built in East Congo as part of Bishop Unda’s ‘Rise and Build’ campaign.
Mission and Ministry

Cooped up by pandemic, entrepreneurs turn to chickens

In a year dominated by COVID-19, food insecurity and other crises, some United Methodists in Zimbabwe are celebrating booming business ventures and new career opportunities for women.