In 2008, it seemed like a daunting challenge: Raise $75 million within seven years to end the deaths and suffering from malaria in Africa.

This month, the commitment made by The United Methodist Church through its Imagine No Malaria initiative reached a June benchmark goal of $40 million ahead of schedule. That total includes an additional $20 million received in gifts and pledges over the past year.

United Methodist Bishop Thomas Bickerton, Imagine No Malaria spokesperson, now considers the campaign to be "at its greatest point of momentum."

While many issues and causes come and go, "this campaign has continued to be resilient in terms of capturing people's attention," Bickerton told United Methodist News Service.

The bishop, who has been part of the campaign since the beginning, acknowledged the time it takes to nurture a worldwide body of more than 12 million into action. Many annual (regional) conferences have had to weed out other priorities so that Imagine No Malaria could find a place, he noted, "and that's now happening."

Sierra Leonian volunteers with the Imagine No Malaria campaign visit with a small child in Koribondo Village near Bo, Sierra Leone, after installing a new mosquito net in his home. A UMNS photo by Mike DuBose.

The good news is that Imagine No Malaria funds have been making a difference in Africa from the beginning.

Shannon Trilli, director of global health for the United Methodist Committee on Relief, called the entire campaign "part of a global win," noting that, since 2008, the death rate from malaria has been cut from a death every 30 seconds to one every 60 seconds.

"We are part of a winning effort and a life-giving effort that is just magnificent," declared Trilli, who has worked on Imagine No Malaria since 2009.

By standard calculations, the 1.1 million nets distributed through Imagine No Malaria have saved nearly 17,000 lives, and more than 5,000 health workers have been trained to help improve many additional lives. "It's not just about life and death; it's about quality of life, kind of an abundant life," she explained.

United Methodist health boards in African countries are taking the lead on a whole host of health issues, including malaria, hunger, nutrition, water and sanitation. "The strategy was to really build the experience and skill set not just to combat malaria, but to be good partners and recipients of funds," Trilli said.

She returned recently from a trip to the Democratic Republic of Congo where Imagine No Malaria provides a bright spot as "clinics are showing zero clinic-based deaths because they actually have the medicines to treat people." 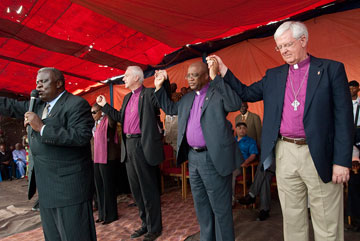 United Methodist Bishop Nkulu Ntambo (front) leads the closing prayer after an assembly in observance of the 2010 World Malaria Day in Kamina, Democratic Republic of the Congo. A UMNS photo by Lynne Dobson.

Such results help spur fundraising for the campaign. "We now have all this documentable evidence of what it is doing," Bickerton said. "The death rate is dropping, the illness rate is dropping."

He recalled a conversation several months ago with Dr. Kasombo Tshiani at Nyadire United Methodist Hospital in Zimbabwe who told him the hospital was seeing an increasing number of malaria cases.

As it turns out, no deaths from malaria had occurred yet this year, an indicator that the church's outreach efforts are working. "He said the awareness levels that have been raised are now enabling people to know that when they get sick from malaria they know where to go for help," Bickerton explained.

"Those kind of stories just continue to feed possibilities here in the United States with people who want to have a meaningful way to invest their money," he said.

The fundraising momentum has come from gifts large and small, from million-dollar commitments to a teenager's pizza fundraiser.

At least 10 United Methodist annual (regional) conferences are expected to make commitment pledges to Imagine No Malaria this summer to raise $1 million or more apiece.

They will join eight other annual conferences that launched fundraising initiatives last fall or winter.

Learn how you, your church or your conference can plan a campaign, organize a fundraising event or make a donation to Imagine No Malaria.

With only 63 members, Peck's Memorial United Methodist Church in Maryville, Tenn., raised more than $15,000 simply by passing the offering plate every single Sunday between Labor Day 2012 and Memorial Day 2013. Other congregations and individuals in the Holston Conference poured lemonade, walked, biked, shaved a pastor's head and pledged to skydive as a way to raise funds.

Big individual donations also have confirmed that Imagine No Malaria can make a difference. "Sometimes it's a person of significant financial means (who) becomes convinced it's an investment worth making," Bickerton said. "That's as exciting as those lemonade stands."

His invitation to annual conferences, churches or individual United Methodists not yet participating in Imagine No Malaria: "Take this campaign home. Run with us this last mile."