Editor's note: The last American troops left Baghdad Dec. 18, 2011, marking the end of the nearly nine-year war in Iraq. Now those who served, their families and the religious professionals who cared for them are returning and in need of spiritual care from their religious homes as well. The United Methodist Endorsing Agency, the denomination's chaplain agency, offers ways for congregations to reach out to deployed and returning service members and their families.

The Rev. Dale C. White, a Navy captain who was deployed to Iraq for 13 months, said The United Methodist Church has been "very responsive" to the needs of service members, from the phone cards to developing liturgies for churches to send members into combat and then welcome them back home.

White was part of a meeting in 2007 between the United Methodist Board of Higher Education and Ministry and the Board of Church and Society. Active and retired military chaplains met with agency staff to form a task force to write those liturgies.

"United Methodist chaplains bring a unique balance of grace and faith to the military. We have deep ecumenical and interfaith traditions, perfect for the pluralistic military environment. I truly believe we are extremely well suited for this chaplaincy setting and have tremendous influence on those we serve."

However, service members, including chaplains, still must deal with the effects of long and repeated deployments in harm's way thousands of miles from home.

White's long deployment took "a tremendous toll" on his family. "Four years later I am still rebuilding the relationships with my daughter and son."

The Rev. Dave Smith, Army colonel and chaplain now serving in Iraq, said there is more the church can do for returning veterans.

Active service members have support agencies on their posts when they return, he said, while Reserve and Guard members often do not find the necessary agencies to help them.

"I believe the church is missing a chance," he said. "I think the church could be in mission to our returning veterans. I have addressed some ideas to my conference. The cabinet and bishop agreed to the importance, but the idea did not move further than an idea. In my opinion, we could do more."

Smith said there has been a lot of stress placed on service members and their families in the last 10 years. Still, he sees something good that has come from this experience.

"The Army has recognized the importance of developing resiliency in our soldiers and families through comprehensive soldier fitness. One of the five pillars of this program is spiritual fitness," he said. 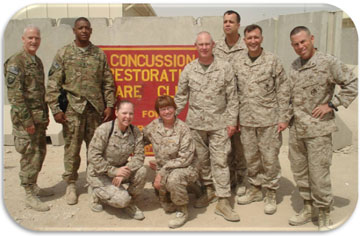 The wars have been long and costly, said the Rev. Ashley Bell, assistant chief of chaplain service with the Department of Veteran Affairs in Nashville, Tenn.

"What's been called 'The Long War' has been the longest and most costly in history," she said, pointing out the conflicts in Afghanistan and Iraq have lasted longer than World War I, World War II, the Civil War or the Korean and Vietnam conflicts.

"It exceeds the inflation-adjusted cost of all wars, except World War II," she said. "This war has the highest percent of amputees since the Civil War due to IEDs (improvised explosive devices)."

"The men and women of this generation have volunteered. They serve in very difficult circumstances and austere situations," Smith said. "They do so because they love their country and they desire to serve. As a chaplain I am proud to call them brothers and sisters in arms as I witness their sacrifice each day while in Iraq or Afghanistan. They are true heroes."

White also finds the young men and women serving today are strong and committed to their mission to serve.

"They are committed, sacrificial, love their country, and have no regrets about their decision to serve when faced with challenges," he said. "I hear this repeatedly - when I was in Iraq and provided ministry to wounded Marines, they would often say, 'Chaplain, if I had to do it all over again, I would - despite the hardships, injuries and risks.'" 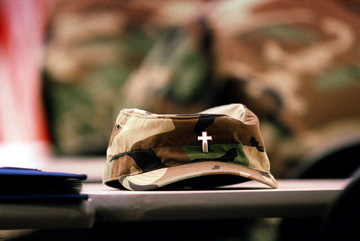 The United Methodist Church has been supportive of men and women in military service with phone cards and liturgies for welcoming and sending members to war. A UMNS file photo by Mike DuBose.

It all comes down to faith

Many United Methodist chaplains were on active duty on Sept. 11, 2001.

White was at the Pentagon on 9/11 as the deputy director of plans and operations, office of the Chief of Navy Chaplains. He said it is hard to put into words how that day changed him and his ministry.

"Ultimately, it helped me reshape and reprioritize what is important. There is nothing more precious than life."

Smith was assigned to the 35th Signal Brigade (Airborne), Fort Bragg, N.C., as a brigade chaplain on 9/11.

"Prior to 9/11, we were an Army preparing and training for war. Since, we are an Army engaged in two wars," he said. He said that has increased the relevance for religious support and has given chaplains expanded staff responsibility as the religious adviser to the commander. Part of that work is to help the commander understand the religions of the countries where the military are stationed.

"This assists the commander not to make mistakes with regards to religion and customs, therefore not making a critical mistake affecting the success of the mission to win the hearts and minds of the local people," he said.

The Rev. Robert T. Williams, Navy captain, was chaplain at Camp David on 9/11. When President George W. Bush, his family and some cabinet members gathered for worship the Sunday after 9/11, Williams offered them words of comfort from Psalm 27:13: "I believe I shall see the goodness of the Lord in the land of the living."

Now 57, he is fleet chaplain for the U.S. Fleet Forces Command in Norfolk, Va.

"I was very much taken aback by the sacrifices of the people that day, by the patriotism and by the concern and compassion of the people of America," he said. "It made a lasting impression on me because of the way the faithful responded."

White is back at the Pentagon in the exact place he was on 9/11.

"It is kind of surreal, but a stark reminder that life is not forever and our faith is what is most important in this life."