United Methodist General Conference delegates refined the denomination's mission statement to infuse a mission directive into the life and work of the church.

The statement now reads, "The mission of the church is to make disciples of Jesus Christ for the transformation of the world." The latter phrase was added in the revision and will now appear in the United Methodist Book of Discipline, the church's official law book.

Bishop Gregory Palmer of the Iowa Conference, the newly installed president of the Council of Bishops, said in an interview that the change, recommended by the Council of Bishops and the Task Force to Study the Episcopacy, gives the church a way to live out its directive to make Christian disciples. 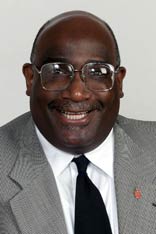 An overwhelming majority of delegates voted on April 28 to make the change. The conference meets once every four years to conduct the business of the church, and it alone officially speaks for The United Methodist Church.

Palmer explained that when the Council of Bishops met in the fall of 2004, they asked themselves, "To what end do we make disciples of Jesus Christ? Is making disciples an end in itself, or does God have a purpose for which He redeems us, recovers us and makes us whole?" The bishops had an overall sense that the statement was incomplete.

A mission statement for the church was only added to the Discipline in 2000. Before then, the church had a constitution, articles governing the local church and a series of doctrinal directives, but no clear and concise mission statement. The second and final sentence in the approved statement reads, "Local churches provide the most significant arena through which disciple-making occurs."

"This is the missionary piece of our making disciples of Christ," noted Bishop Palmer. "We seek to join God in the redemption of the whole world."

In a sermon called "The New Creation" given in 1785, Methodism's founder, John Wesley, considered the promises made in the Book of Revelation: no more death and no more pain, sickness, or grieving for or parting with friends. Wesley envisioned "an intimate, an uninterrupted union with God; a constant communion with the Father and His Son Jesus Christ, through the Spirit; a continual enjoyment of the Three-One God, and of all the creatures in Him!" The bishops thought that disciples of Christ should work to transform the world into a new creation.

The bishops began to use the phrase "for the transformation of the world" in relation to the mission of the church, and various annual conferences also added it to their own mission statements.

Palmer said the Council of Bishops decided to "test the waters" in 2008 to see if the church was now ready to complete its directive, "to make disciples that the world might be made new-transformed."

*House is the editor of New World Outlook, a publication of the United Methodist Board of Global Ministries.

Leaders who helped develop a separation plan for The United Methodist Church answered questions about their proposal during a live event Jan. 13.
General Church

United Methodist leaders from Africa, Europe and the Philippines are offering a “Christmas Covenant” and inviting others to sign on.
General Conference

Church future under negotiation before GC2020

United Methodist leaders of varied perspectives on LGBTQ status struck an optimistic note about conversations that aim to find consensus before the next General Conference.