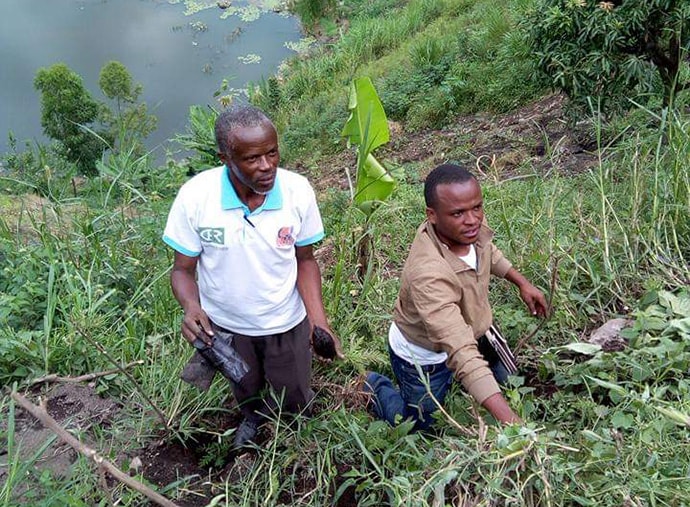 Agronomist Rachid Mutoro (right), a United Methodist in the Kivu Conference, helps a member of United Methodist Men tend to a new tree nursery the men have started in Goma, Congo. The men’s group is planning to transfer the trees to United Methodist church land in the region. Photo by Philippe Kituka Lolonga, UM News.

United Methodist men in Congo are helping to fight climate change through education and action.

“The effects of climate change are felt in Congo. … It is our responsibility as men to see far away and begin to counter it through our actions,” said Martin Lubamba, president of United Methodist Men in the Kivu Conference.

During a recent celebration of the men’s organization, the group reflected on ways to combat climate change. They appealed to agronomist Rachid Mutoro, a young adult in the conference, to teach them about global warming and the measures they can take to protect the environment.

“The challenge is significant,” Mutoro said, “because despite the threat, our society is struggling to review its waste management habits in households and industries that are located in urban areas.”

Mutoro urged the men to raise awareness of the dangers of climate change and the consequences, including rising temperatures and sea levels, flooding and decreased agricultural production.

He said United Methodists need to practice good management of household waste and garbage and to reforest empty spaces to reduce greenhouse gases.

“All this will leave the future generation with a better climate and clean air,” he said.

Mutoro said the destruction of forests is a problem facing the country.

“Today, Congo is threatened by heavy deforestation by a large number of uninformed farmers and is at great risk of extinction of some (fauna and flora) species,” he said.

Mathieu Bahindula, who is in charge of projects for the Kivu men’s group, said he is planning training for United Methodist farmers to help them deal with climate change issues.

The men’s group also has begun planting trees in Fizi and Uvira, and efforts are underway to begin the activity in other districts such as Bukavu, Goma, Kisangani, Kindu and Beni.

Alimasi Musafiri, president of United Methodist Men in Fizi, said the group has its own tree nursery and the men distribute the trees to different sites for planting.

The United Methodist Men of Kivu vowed to plant trees on United Methodist church grounds and to educate church members and the community to act now to make a difference for future generations.

The men have created a temporary tree nursery to allow them to start planting in church plots, and Mutoro said he hopes it will become a permanent tree nursery. 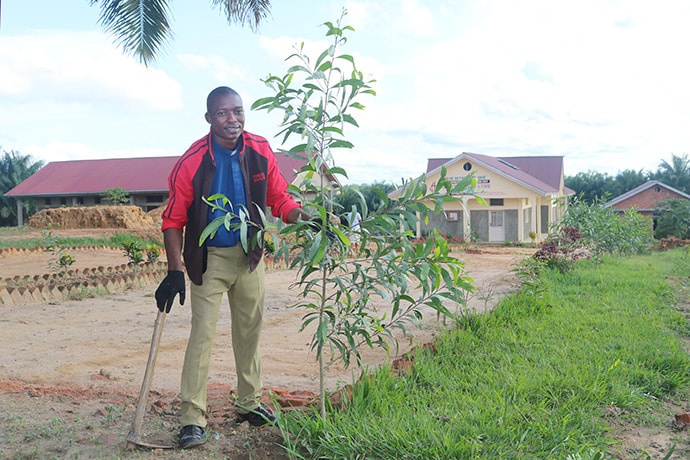 The Rev. Felix Okende maintains a tree he planted in front of Kitumaini United Methodist Church in in the South Kindu District of East Congo, where he is pastor. The agronomist plants trees next to United Methodist churches, schools and health centers to help protect the environment. Photo by Chadrack Londe, UM News.

In the East Congo Conference, the Rev. Félix Okende has been reforesting land belonging to The United Methodist Church for nearly three years.

“One of the natural and effective ways to fight global warming is the reforestation of our forests, which is why I prefer to contribute as a pastor in this struggle by planting trees,” he said.

Okende, pastor of Kitumaini United Methodist Church in the South Kindu District, is an agronomist and currently has more than 800 seedlings in his nursery ready to be reforested at several United Methodist sites.

“I’m planting the trees next to our local churches, United Methodist schools (and) health centers. This will bring a good air next to our churches and allow worshippers to worship God with peace of mind,” Okende said.

In addition to helping the environment, the pastor’s tree planting is providing extra income.

“I use two types of trees in the reforestation activities I do: fast-growing trees and fruit trees. The fruits that these trees produce, I’ll eat them with my family and some will be sold to allow me to have some money. It is a way for me to demonstrate that it is easy to have the money thanks to the reforestation that also allows us to fight against global warming,” he said.

Dr. John Manga, president of United Methodist Men in Bukavu and head of the government’s Office of the Environment Division in South Kivu, said it is important to fight climate change because it’s affecting people’s health.

“Today, we have several diseases that through global warming or climate change begin to occur in humans like chikungunya, Ebola, dengue and salmonellosis,” he said.

In his opening remarks at the Kivu Annual Conference in Goma, East Congo Bishop Gabriel Yemba Unda acknowledged that climate change is one of the greatest threats to human development efforts today.

“Climate change affects many sectors of the economy and threatens the achievement of the goals of sustainable development,” he said.

He called on all United Methodists to do their part to protect the environment and bring about positive change.

The property will be used by the United Methodist University’s Graduate School of Professional Studies.
Mission and Ministry