A United Methodist layman will be among 10 religious leaders and peace advocates from various denominations meeting with Pope Francis during his visit here.

Retired Chief Justice Reynato Puno, long an advocate of just governance, will be part of a short meeting with the Catholic pontiff on Jan. 18.

“I am excited to see and hear Pope Francis,” Puno said in a statement about the meeting. “I sincerely believe that Pope Francis is a servant leader who can really contribute to the mitigation of the worsening problems of the world.”

The pope is visiting the Philippines from Jan. 15-19. The trip also includes a meeting with survivors of Typhoon Haiyan. Haiyan, known as Yolanda in the Philippines, was a Category 5 storm that killed more than 6,000 people in 2013.

Puno is a proponent of governance characterized by transparency, accountability and integrity, a position supported by the Social Principles of The United Methodist Church.

In a speech last year, the retired justice highlighted the “seeming deluge of global problems cascading in the Philippines.” Those problems include global climate change, resulting in stronger typhoons; the extreme grinding poverty of the Filipino people; migration to foreign countries, which results in a brain drain; and unrelenting graft and corruption, he said. 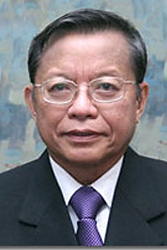 Concern for the marginalized

Puno believes the pope “has a good grip” on such issues and thinks his deep concern for the marginalized is key. “He is a pope who can goad us to goodness, for he lives Christ’s teachings and follows His call, especially the call to look for the overlooked,” he said.

"I am sure Pope Francis will be happier if our response to his call as a sower of God’s words is less by preparing for his physical comfort but more by preparing our hearts and cultivating minds to assure that God’s words will not keep falling on barren grounds," Puno said.

The Rev. Carlos Reyes, executive secretary of the Episcopal Commission for Interreligious Dialogue of the Catholic Bishop's Conference of the Philippines, said in a report that the 10 religious leaders would have an audience with the Pope that will last about 10 to 15 minutes.

*Mangiduyos is a deaconess in the United Methodist Philippines Central Conference and a professor at Wesleyan University-Philippines in Cabanatuan City.