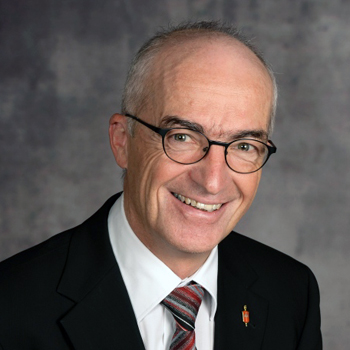 The unity of the church is a gospel mandate. It is stated in the constitution of The United Methodist Church (Book of Discipline 2016 ¶6). It is repeated among the leadership responsibilities of bishops (¶414.6). It is much different from simply holding an institution together because of common economic reasons, strong as they may be in today’s value scales. But what makes up the essence of church unity?

There are many different ways in which the New Testament speaks about unity. It begins with the teaching and prayer of Jesus as found in the four gospels. It continues in the very early developments of the church in the Acts of the Apostles and then continues in the letters of Paul and others. Such texts offer a variety of aspects and perspectives, but there is always a distinct reference to Jesus, the Christ. To highlight this may seem obvious. It has, however, not been obvious in many past and present discussions on church unity.

In the first centuries of the Christian church, the struggles on unity were predominantly on doctrinal questions of understanding and teaching about the One in whom Christians believe. These disputes gave rise to confessions, among which several are still part of the prayers and liturgies which unite the many churches in the ecumenical movement. All these confessions express the basic belief in a triune God. They do not contain moral issues, for better or for worse.

An important part of the history of unity — or more of disunity of the church — showed the weak side of such doctrinal confessions. People of different church traditions took arms against each other and killed each other in the attempt to defend their basic belief. The experience of confessional wars — particularly in Europe — gave rise to anti-clerical movements. By the time the Wesleyan movement spread over Britain, it became evident: What matters in Christ Jesus is faith working through love (Galatians 5:6) — a key Biblical insight for Wesley.

Roman Catholics have kept a better understanding of the value of ecclesial unity and, over centuries, have formed a worldwide church body that integrated most renewal movements as long as they did not threaten papal authority. Protestants have a tradition of splitting over almost everything. They often interpret unity as a purely spiritual value with the advantage that every group can keep its own power and authority. Methodists were not any better than other Protestants and have their own record of splits before they began to move to greater unity in the 20th century.

As I look back as a church historian on the disputes and schisms of past centuries, I see very many situations where the opponents got deeper and deeper into a conflict which overshadowed the many biblical beliefs which they shared in common. And in those rarer cases where it seems inevitable for me that there had to be open dispute about truly being church and its boundaries, I usually do not see any Christian spirit in the way the conflict was handled by both parties.

As I look into the presence and the future, I pray that my biblical and historical knowledge informs my ministry as a bishop. Of course, I do it in a specific situation and as a bishop whose episcopal area is probably the most diverse in all of The United Methodist Church. It spreads from Northern Africa to some countries of Western Europe, and from Poland in the North to the Balkans in the South of Central Europe.

What, then, makes up Christian unity for me, in a Wesleyan perspective? It is more the centrality of Jesus Christ in whom we trust with all our life than a precise doctrinal expression of this belief. It is more the willingness to be renewed into the image of Christ in all our behavior toward others than a precise moral code of good and bad acts. It is more the continued effort to stay in relationship with the other as a person created in the image of God than a fixed set of rules with legal binding.

I know that this is no clear answer for many questions that are before us as a denomination. However, it constantly reminds me in my ministry of what needs to remain in the center, and encourages me to continue the journey of conferencing in a manner that other people can see that we are disciples of Jesus, the Christ. It is, for me, a gospel mandate.