A United Methodist congregation in Baiwalla, on the Sierra Leone eastern border with Liberia, has reason to celebrate.

After five years of its United Methodist presence, the church has grown from 15 to 100 members with a few other congregations sprouting up in neighboring villages.

Baiwalla is about two miles away from Bomaru on the Liberian border, where the first shots leading to Sierra Leone’s civil conflict in 1991 were fired.

The muddy road that connects the remote community to the rest of the country is rough. Access to goods and essential services is cut off when the road becomes impassable at the peak of the rainy season, making worse an already poor situation. Social amenities like hospitals, electricity and pipe-borne water are still a distant dream. 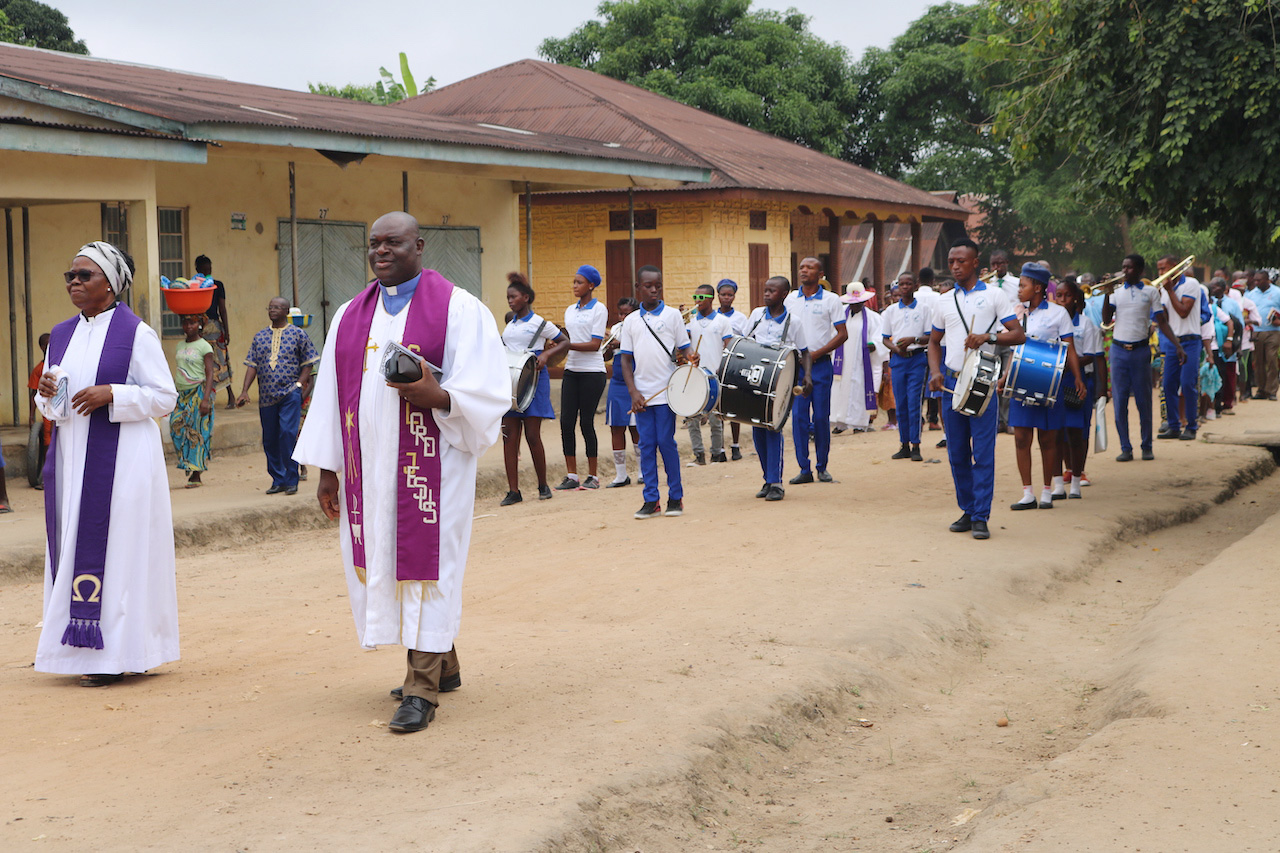 Baiwalla United Methodist Church celebrated its five-year anniversary in Kailahun, Sierra Leone. Church members marched through the streets as a way to celebrate and evangelize in this predominantly Muslim community. Photo by Phileas Jusu, UMNS.

She started the Baiwalla ministry with a one-meal-a-day school-feeding program for 500 pupils in the Roman Catholic and British Methodist primary schools and a nursery five days a week. There is not yet a United Methodist school in the community.

With the poor road network denying the community access to markets and opportunities, food is a challenge to schoolchildren.

“With time, the number went to 700, then 900 recently when government declared free education. We have a team that moves from school to school. School feeding is a very vital part of our ministry,” she said.

Banya has first-hand experience with the food shortage, having grown up in the community decades ago. Going to school hungry was one of the challenges she faced in her school days, and she understands how much impact a program like this has to children living in poverty.

“After the school feeding, we opened an adult literacy program. Then, later, computer classes for teenagers,” she said.

“We have not quite succeeded with the computer classes because the children want easygoing things like just browsing for music and movies on the internet and (they’re) not willing to try anything challenging.”

However, she said, they have had quite a few success stories with the adult literacy classes.

“The village imam (an Islamic equivalence of a pastor in charge) learned to read and write in our school,” she said. “We do not teach formal education curriculum but functional literacy — things that they do in their everyday lives. If, for instance, the individual is a cocoa farmer, we teach them how to read the scale, so that they’re not cheated when they go to sell their produce to exporters in the cities.

“If (they are) a businessperson, we teach them how to take stock of their sales, debts. Just those things that make them functional in the things they do for a living. We have a few people who were able to achieve that in the community through our schools,” she said.

With support from the Minnesota Conference, the first United Methodist High School is being built in the community. It will have a girls’ boarding home.

“Kailahun ranks high on teenage pregnancy and girls’ dropout rate in the country and I want to make sure girls who come to our school complete school without getting pregnant,” Banya said.

She considers building the school a priority over a church because the nearest high school is 15 miles away, making it a challenge for pupils, especially girls, to access secondary education.

For now, church services are held in the school building that has been roofed awaiting completion. Just across the road from the school, the community has already offered Banya a 3-acre piece of land that is being cleared for the new United Methodist church building and school staff quarters.

At last month’s anniversary celebration, there was a lot of enthusiasm among the young people to attend church.

Hannah Amara, 23, is married to a Muslim. She believes in Jesus Christ but is compelled by tradition to follow the faith of her husband. She only goes to church when her husband is away and that was why she was at the service that morning.

She said it is painful to serve a religion she does not believe in. Weeping as she delivered her testimony, she appealed to the church to continue to pray for her for strength.

“I will remain a Christian until I die. I pray that God will touch my family and husband so that they’d allow me to worship the God I believe in,” she said. 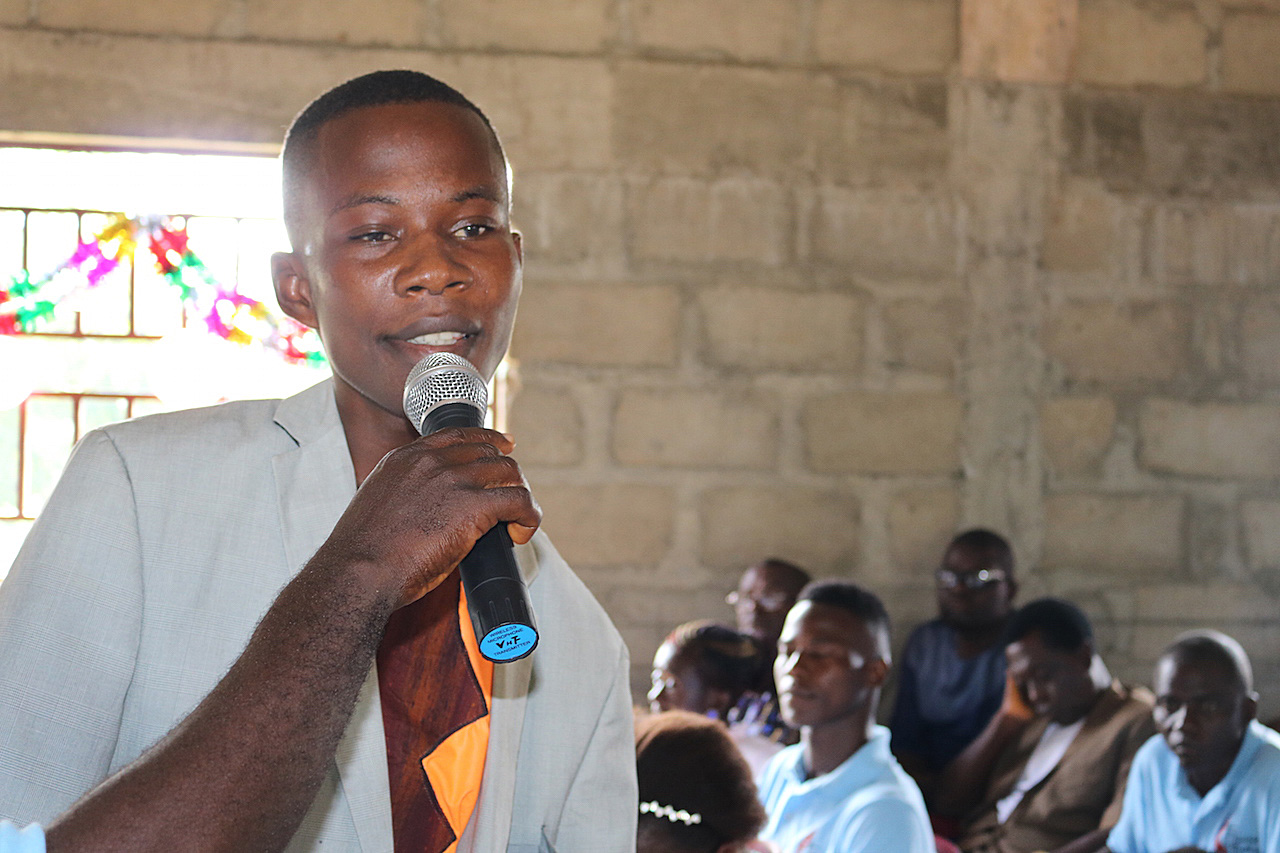 Juana Jusu, 25, said he is thankful for The United Methodist Church. He was paralyzed in his right hand and feet after an insect bite. “They held a special prayer session for me where all the members surrounded me. They prayed and indeed God’s power visited me that day.” Photo by Phileas Jusu, UMNS.

Juana Jusu, 25, is thankful for the church. He was stung by an unknown insect while harvesting cassava on the farm and became paralyzed in his right hand and feet.

"They held a special prayer session for me where all the members surrounded me. They prayed and indeed God’s power visited me that day. … For that, I thank Jesus, the master, for his goodness in my life.”