When she was growing up in the Philippines, Estrelita Mariano watched her parents struggle to earn a living as tenant farmers.

Seventy percent of their crops in central Luzon went to the property owner, she explained, and then, as now, Filipino farmers were always in debt because they had to borrow ahead of the harvest to get their crops to market.

Today, as a founding member and head of advocacy for Amihan, National Federation of Peasant Women, Mariano fights on behalf of agrarian reform and land rights for rural women.

She and Teresita Vistro, another leader from Amihan, were among the nine international women invited by United Methodist Women to participate in this year's Commission on the Status of Women meeting at the United Nations.

The theme for this 56th commission meeting is "the empowerment of rural women and their role in poverty and hunger eradication, development and current challenge." Rural women represent more than a quarter of the world's population, according to the Women's World Summit Foundation, but many are poor.

Harriett Jane Olson, top executive of United Methodist Women and its administrative arm, the Women's Division, United Methodist Board of Global Ministries, said the organization sponsored the participation of the nine women so that governmental representatives at the Commission on the Status of Women meeting would have "the wisdom of the women who are doing the work."

When asked about the biggest challenge facing rural women in the Philippines, Mariano had a simple answer. "Our poverty," she said.

Since its founding in 1986, Amihan has established chapters in 32 provinces on the three major islands of Luzon, Visayas and Mindanao. The organization seeks policy changes and development alternatives from the government, promotes food security and sustainable agriculture and focuses on health and education to improve family and maternal welfare.

The group's lobbying efforts against certain government programs and increasing militarization of rural areas have led to phone taps in its offices and other types of harassment, Vistro said.

"The kind of work we do is considered dangerous by the government," she added. "They consider us a threat." 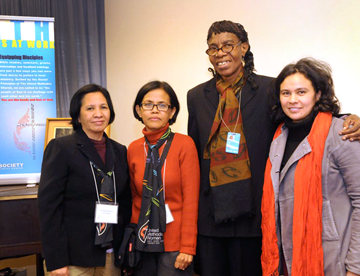 From left, Estrelita Mariano and Teresita Vistro of the Philippines, Nelcia Hazell of St. Vincent in the Caribbean and Ana Chã of Brazil greet each other after a panel discussion at the Church Center for the United Nations.

Ana Chã of Brazil also lobbies on behalf of those pushed off their small patches of farmland by big corporations trying to take over the country's large concentration of land and natural resources.

As a community educator with the Landless Workers Movement, which has organized 1.5 million people, Chã works with women's groups to find alternatives to agribusiness. "We believe that food is a human right," she said.

In Kosovo, which just celebrated its fourth year of independence, "rural women do not have a voice," said Eli Gashi, although some organizations "feel entitled" to speak for them without consultation.

Her network is trying to change that. Gashi is chair of the board of directors of the Kosova Women's Network, which includes 86 nongovernmental organizations as members. She also is the founder of Alter Habitus, an alternative academic and feminist institute, and has worked for the United Methodist Committee on Relief in Kosovo.

"The rural women contribute considerably to their family budget through their unpaid labor," she noted. However, women have few assets, making it harder to get loans. The Kosova Women's Network offers access to that type of capital, as well as education and job training.

For Tomoko Arakawa, general manager of the Asian Rural Institute in Japan, the Commission on the Status of Women meeting offered an opportunity to reconnect with two graduates of the institute's training program for grassroots rural community leaders.

Judith Daka of the Ecumenical Development Foundation in Zambia already had successfully trained 4,200 women and youth in organic farming and beekeeping before participating in Asian Rural Institute training in 2001. Afterward, Daka said, she returned to Zambia knowing exactly how she wanted to teach organic farming.

Because many cannot read or write, the "learning-by-doing methodology is the best in the rural areas," Daka explained. By learning to use local resources, like manure instead of chemicals for fertilizer, "you don't need to go to a shop to buy anything. And, at the end of the day, you can have good crops."

What is unique about Daka's program is whom she is teaching to farm commercial sex workers and female street kids. It's not easy, she admitted, because "they live a very tough life, without love." But there have been successes. Some of the women are married, some are working and some have been hired as staff in the program.

Naw Lee Myar of the Kayah Phu Baptist Association in Myanmar has attended the Asian Rural Institute three times as a program participant in 1998, as a training assistant in 2007 and as temporary staff in 2008.

As director of social service, development and rural mission for the association, she was eager to absorb any information that will help her encourage her community to use sustainable agriculture and "improve their livelihoods."

Both women and men participate in the Asian Rural Institute's training. While gender is not a major focus, cooperation is emphasized. "We just equally share the work," Arakawa said.

The Commission on the Status of Women meeting has given her a broader perspective on the concerns of rural women and she noted with appreciation the inviting atmosphere created through sisterly solidarity. Even between representatives of government and civil society, she said, the setting "really makes us close to each other."

In the Caribbean, "the cultural belief that men are the natural leaders" hinders women's economic progress, said Nelcia Hazell, a Methodist from St. Vincent who serves as a community educator for the Caribbean Conference of Churches. 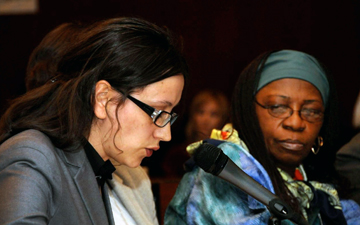 Eli Gashi of Kosovo, left, and Beatrice Fofanah of Sierra Leone were among the grassroots women sharing their experiences at the 56th U.N. Commission on the Status of Women meeting.

Studies show that girls take more advantage of access to education than boys, she added, but "that education does not translate into well-paying jobs" or entry into leadership and political positions. Rural women suffer from the overall poor infrastructure for farming and isolation that makes it difficult to get products to market. Some of indigenous descent, as Hazell is, still live on reservations with limited social services and few options for transportation to school.

The main challenge for women in the Caribbean, Hazell declared, is "domestic violence in all its forms and violence in general."

"We experienced one of the worst wars in the world in Sierra Leone whose scars have yet to be healed," she said during a panel discussion on violence against women.

In addition to violence, other challenges for rural women in Sierra Leone include early marriage, maternal and infant mortality, illiteracy and female genital mutilation.

These issues also serve as topics for the workshops and seminars that Fofanah, who has a teaching background, organizes for women in The United Methodist Church of Sierra Leone. Her goal is that women, particularly rural women, become empowered enough to take control of their lives and the lives of their children.

She came to the Commission on the Status of Women meeting looking for advice "to help rural women realize their potential."