A United Methodist pastor and Jewish rabbi officiated at the July 31 wedding ceremony of Chelsea Clinton and Marc Mezvinsky in Rhinebeck, N.Y.

The Rev. Bill Shillady, executive director of the New York City Society and a clergy member of the New York Annual (regional) Conference, performed the ceremony with Rabbi James Ponet, the Jewish chaplain of Yale University.

"It was a wonderful honor to be part of this special day in Chelsea and Marc's life," Shillady told United Methodist News Service.

Although her parents - former President Bill Clinton and U.S. Secretary of State Hillary Rodham Clinton - are constantly in the public spotlight, Chelsea Clinton is not. Little information regarding the wedding-related events was officially released, either before or after the nuptials.

The proud parents did issue a short statement expressing their happiness over the union. "We could not have asked for a more perfect day to celebrate the beginning of their life together, and we are so happy to welcome Marc into our family," the statement said.

Before the wedding - sometimes referred to as the event of the season - the media speculated about the guest list of 400 to 500 and detailed why people were betting (correctly) that the ceremony would take place at Astor Courts, a historic Beaux Arts pavilion built for John Jacob Astor IV at the beginning of the 20th century.

In the pre-wedding gossip, one topic - religion - drew as much discussion as whether Oprah would attend (she did not) and who designed the wedding dress (Vera Wang).

Like her mother, Chelsea Clinton, 30, is a United Methodist. Mezvinsky, 32, comes from the conservative Jewish tradition, which frowns on intermarriage. Was it possible she would convert? If not, would a rabbi be part of the ceremony? 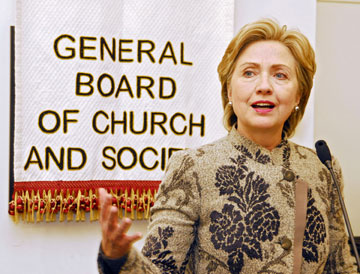 Hillary Rodham Clinton, then a U.S. senator, speaks during a reception given by the United Methodist Board of Church
and Society in 2007. A UMNS file photo by Jay Mallin.

Those questions were answered - with a no and a yes - by the participation of both Shillady and Ponet in the wedding.

Shillady said he could not speak about the wedding or his relationship with the Clintons. But sources at Park Avenue United Methodist Church on the Upper East Side of Manhattan - where Shillady served as senior pastor for nine years - said Chelsea Clinton had occasionally attended the church.

The Sunday after Hillary Clinton announced on Jan. 20, 2007, that she was running for President, all three Clintons attended at Park Avenue, along with Mezvinsky.

Ponet, a Reform rabbi, has been on staff for nearly 30 years at Yale University, where Bill and Hillary Clinton met. He also is a visiting lecturer on the subject of Judaism at Yale Law School, the executive director of the Joseph Slifka Center for Jewish Life at Yale and director of the Yale Hillel Foundation.