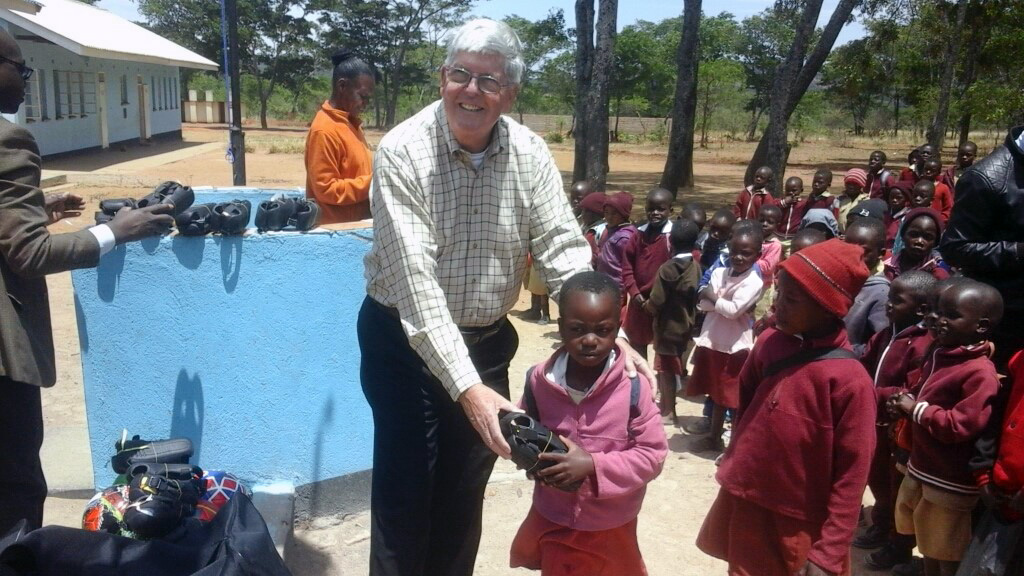 Charlie Moore, a member of Community United Methodist Church in Crofton, Maryland, and team leader of the Zimbabwe Volunteers in Mission, hands shoes to a student at Hanwa Mission School in Zimbabwe. For over 20 years, the U.S. church has been working with United Methodists in the Zimbabwe West Conference to improve lives in the rural Murewa District. Photo by Chenayi Kumuterera, UMNS.

For more than 20 years, members and friends of Community United Methodist Church in Crofton, Maryland, have been working with United Methodists in the Zimbabwe West Conference to improve lives in the rural Murewa District.

In October, Charlie Moore, a member of the church and the Zimbabwe Volunteers in Mission team leader, brought 50 pairs of shoes and a dozen soccer balls to hand out to the students at Hanwa Mission School. A fifth-grade class from Crofton Elementary in Maryland donated the items.

On a recent mission trip, church members joined the Hanwa community in drilling a borehole that supplies water to the mission school and village. They also helped construct a primary and secondary school blocks and a guesthouse.

Moore said none of these things would be possible without the local people in Zimbabwe “who have picked up their picks, shovels, hammers and paint brushes to work side by side with their partners here in America to fulfill their dreams,” he said.

He also credits Zimbabwe Episcopal Area Bishop Eben K. Nhiwatiwa for his role. Moore said the partnership truly began to flourish when Nhiwatiwa came on the scene. “(He is) the water and the fertilizer that has nurtured our field of service.” 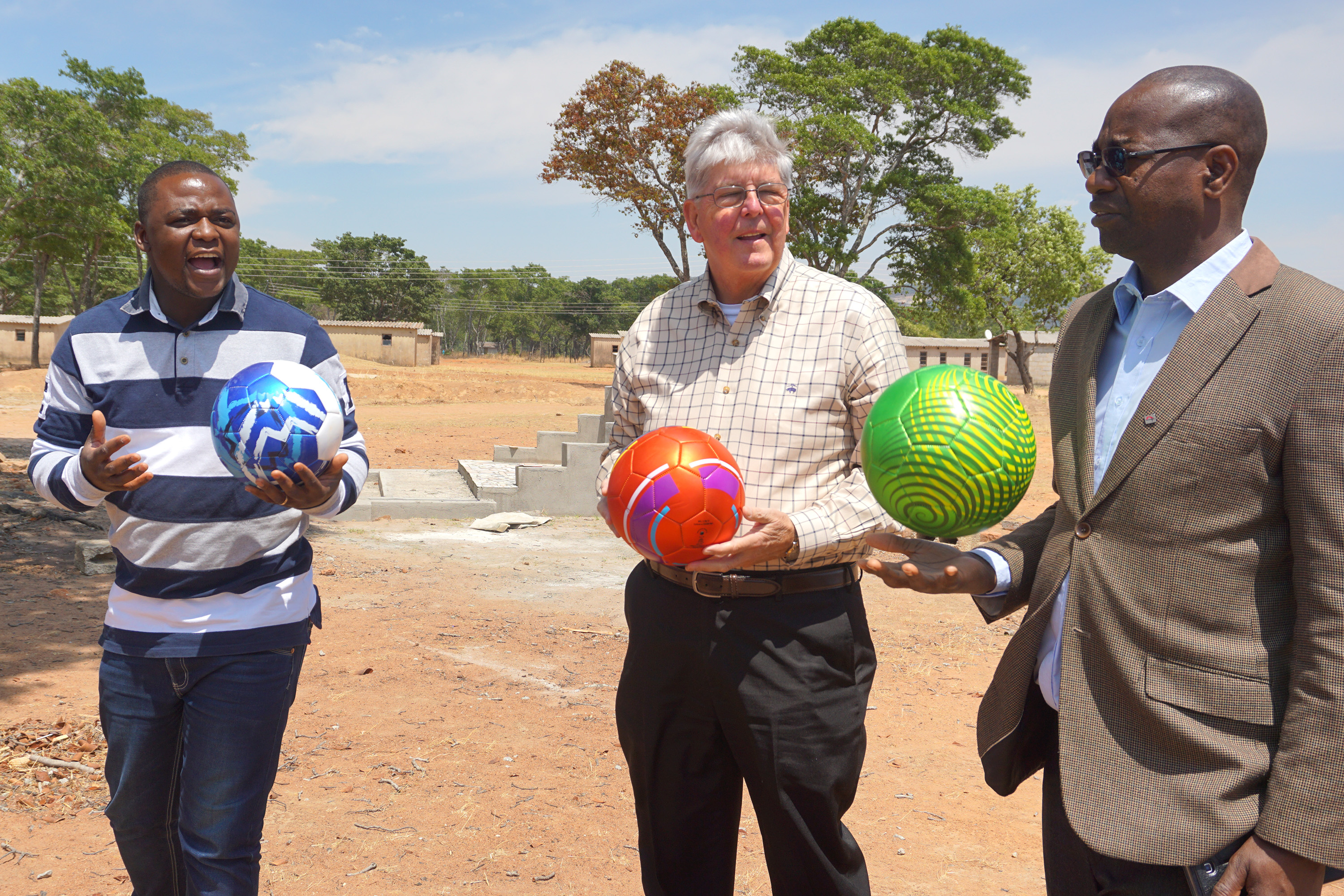 The Rev. Future Sibanda, left, Charlie Moore and the Rev. Henry Luckson Chareka hold soccer balls donated to students at Hanwa Mission School in the Murewa District of Zimbawe as part of a partnership between Community United Methodist Church in Crofton, Maryland, and United Methodists in the Zimbabwe West Conference. Photo by Chenayi Kumuterera, UMNS.

Nhiwatiwa said he is thankful for the relationship with Community United Methodist Church and the larger Baltimore-Washington Conference, as well as the support of the bishops who have led that area over the past 20 years, including resident Bishop LaTrelle Easterling.

“They have been very supportive,” Nhiwatiwa said, adding that the Crofton church has a passion for Zimbabwe and the Murewa District. He said the people in Murewa have even given Moore a totem, the “Charlie Moore Soko (monkey) Murewa,” as a sign of their gratitude.

“Crofton sees people in Zimbabwe,” Nhiwatiwa said. “They are not just seeing a country in flora and fauna, but they are seeing people in their eyes.”

Community United Methodist Church in Crofton recently helped with the installation of a solar power project at Dindi Medical Clinic and provided scholarships for more than 20 students at the Hanwa Mission schools.

Moore said 95 percent of the church’s contributions come from special fundraisers and extra-mile giving by members, family and friends of the church.

David Booney of Smithville United Methodist Church in Dunkirk, Maryland, has traveled to Zimbabwe many times as part of the Zimbabwe Volunteers in Mission team.

“It did not take long for me to fall in love with Zimbabwe and its beautiful people,” he said. “Through the years, I have made countless friends and many I now consider my family.”

“I have a special place in my heart for the Hanwa Mission School in Macheke. I feel at home in this community and have a big family there,” Booney said.

Charlie Moore hands a pair of shoes to a student at Hanwa Mission School in the Murewa District of Zimbabwe. Moore brought 50 pairs of shoes and a dozen soccer balls to hand out to the students as part of a partnership between Community United Methodist Church in Crofton, Maryland, and the Zimbabwe West Conference. A fifth-grade class from Crofton Elementary in Maryland donated the items. Photo by Chenayi Kumuterera, UMNS.
He said the mission trips have enriched his life and strengthened his faith.

Moore said 15 Volunteers in Mission team members will return to Murewa in January with a special focus on completing an early child development center at Hanwa Mission.

There also are plans to construct computer and science laboratories and to turn the Hanwa day school into a boarding school.

“We have enjoyed the support from (the Zimbabwe Volunteers in Mission team) in the Murewa District,” said the Rev. Henry Chareka, district superintendent. “I am so thankful for the support rendered to us.”

Nhiwatiwa said the Volunteers in Mission team has transformed several communities in Murewa, working on projects or initiatives that directly and positively affect people’s lives.

That has been the most meaningful part for Booney.

“What impacts me the most, going on nine years I visited Zimbabwe, was watching children sitting under trees at Hanwa and Mashambanhaka, because they have no classrooms,” he said, “and, today, seeing these same children attending colleges and universities.”

A ministry of United Methodist Women, Bethlehem Centers offer programs to people of all ages, from child care to senior clubs.
Mission and Ministry