While only two young people spoke on the General Conference stage this morning, thousands more stood with them. Chelsea Spyres and Peter Cibuabua began their witness by identifying themselves as “ambassadors sharing young people’s voices from around the world.”

That voice declared the uncompromising nature of God’s love and grace for all people.

“The objective of this message is to help you, our brothers and sisters in the church, to understand how widely and deeply the young people are engaged in Christ’s journey with energy and love,” they said.

They then listed challenges their generation faces as well as the solutions for building the church.

“Maybe God stops whispering and starts to yell,” Spyres said as she called persons to move beyond their personal intentions and goals in order to listen to “new voices longing to be heard.” 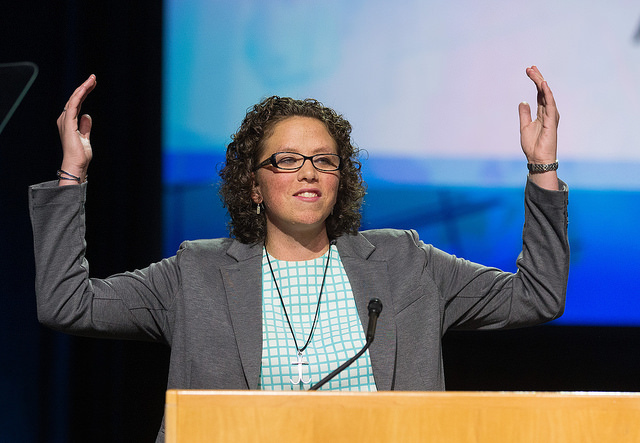 She reminded the assembly of each individual’s uniqueness. “How would the church grow,” she asked, “if we encouraged each person to discern their calling, to discern where God is leading them to make a difference in the world? If we listened before we spoke?”

Cibuabua said young people’s programming is usually one of the lower line items on a conference budget.

“In this way, young people are marginalized in the church,” he said, listing ways the world’s young people are victimized by violence, war, disease, poverty, racism, sexism and child trafficking. Even so, he added, “Young people are shaped by the good news of Jesus Christ.”

Spyres challenged the church to give God’s transformational love a chance. “No matter where you stand on questions of human sexuality,” she said, “we are called to love, and love before anything else.” She asked all present to accept people “as God created them to be” rather than “trying to conform them to who we think they should be.”

Cibuabua noted that today’s young people treat issues like homosexuality “out loud.” He asked others to do so also, “with compassion and love, no matter what might happen.”

The two young people lifted up The United Methodist Committee on Relief, outward-reaching congregations and The Young African Leaders Summit as examples of transformational love at its best. “We are a church of action, a church that lives out our call to service,” Spyres said. “It is this kind of response that draws young people into the church.”

Other voices of youth were raised onscreen — how the church is weak as well as how it gets it right. Other young people who had also submitted videos during the yearlong process that produced the address sat on the stage.

Cibuabua offered a takeaway in the form of a new slogan for young people: “Today First, Tomorrow Then,” instead of saying, “young people are the church of tomorrow.”

The remarks on stage concluded with a call to unity and an invitation to continued conversation across generations. “More than anything,” Spryes remarked, “we hope you will connect with the young people in your own life and ministry.” Postcards were made available to delegates wishing to share words of encouragement and support; these may be dropped off at the Young People’s Lounge in the Convention Center. 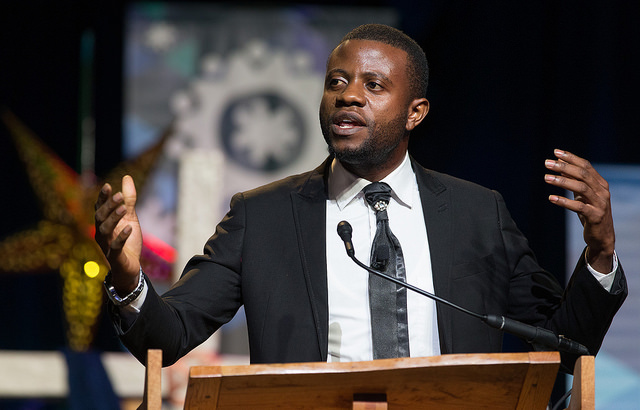 These two young people were nurtured, live and serve half a world apart; yet, they professed a common message, “Be like Jesus and build relationships and love before anything else.”

Spyres grew up in Delaware and now serves as a missionary in Detroit. She explained that she began attending her home congregation at a young age with her grandmother, Nana. Church camp and mission work followed during her teen years. Spyres spoke of her appreciation for the nurture she continues to receive from her home congregation in Newark, Delaware. “That family of faith allowed me to see how powerful the body of Christ can be, when the church is looking outwardly more than inwardly,” she said.

What she learned from them about “the power of relationships” carried her to commissioning as a Global Mission Fellow (US2) in 2014. She credits her service at NOAH Project in downtown Detroit for showing her how powerful love really is. “Every day I get a glimpse of the Kin-dom here on earth through a bagged lunch and stories shared.”

Cibuabua is from Kinshasa, Democratic Republic of Congo. His faith story began in a Muslim household.

“But it happened that I began studying in one of the United Methodist schools in my home village,” he said. His decision to start attending a United Methodist church made him “like a stranger in my own house.” Eventually, he was baptized and confirmed. Like Spryes, Cibuabua notes, “I loved the preaching about love and grace.”

Today Cibuabua is the evangelism chairperson and president of the young people’s ministry in his conference, showing others “when we have love, we can live above and beyond any situation with a neighbor.” Teaching English, speaking on the Methodist Radio and cleaning the church “are still my favorite work in life,” he noted.

Just as the young people’s address ended with an invitation to listen, it began with listening. In a press conference held soon after their address, Spryes and Cibuabua recounted the many phone calls that linked them over the past seven months.

They began writing last October aided by Skype and Google Docs. Given the eight-hour time difference between Detroit and Kinshasa, that involved, “many nights and many days,” according to Cibuabua.

The two reviewed all videos that others submitted to the Young People’s Ministry of Discipleship Resources. “We wanted to make sure that this was more than just our two voices,” Spyres explained.

A common theme emerged from their listening: “Our prayer for General Conference is that everyone listen and come together around their differences in a healthy way.”

Cibuabua and Spyres’s personal stories and the recorded voices of many others provided the starting point for the young people’s address.

Carl Gladstone, regional staff person for the Young People’s Ministries Division of Discipleship Ministries, developed and supported the process that shaped the young people’s address. After young people submitted videos, a couple of rounds of online discernment and voting resulted in the choice of Spyres and Chibuabua as the in-person speakers at General Conference.

“We are fully aware we could have had 50 people on stage and still not represent everyone. But I think we did a pretty good job of bringing those voices to Portland,” Gladstone said.

The Young People’s Ministry is making the voices of young people witnessing to the church available by podcast or Twitter #umypa.

Kay DeMoss is the senior editor-writer for Michigan Area Communications.