This week, Jacey Johnson, a United Methodist working on a Master of Divinity degree, will get a taste of what community organizing is all about — from both a theological and practical perspective.

The 24-year-old student at United Methodist Wesley Theological Seminary in Washington is among the participants attending a leadership-training program organized by the Student Christian Movement-USA and its parent body, the World Student Christian Federation-North America. The participants come from the United States, Canada and a few other countries.

While the focus is on promoting social justice in today’s world, Johnson is part of a strong United Methodist connection that dates all the way back to the federation’s founding in 1895. John R. Mott, a U.S. Methodist layman who later won the Nobel Peace Prize, was one of six founders and also served as the federation’s chief executive. 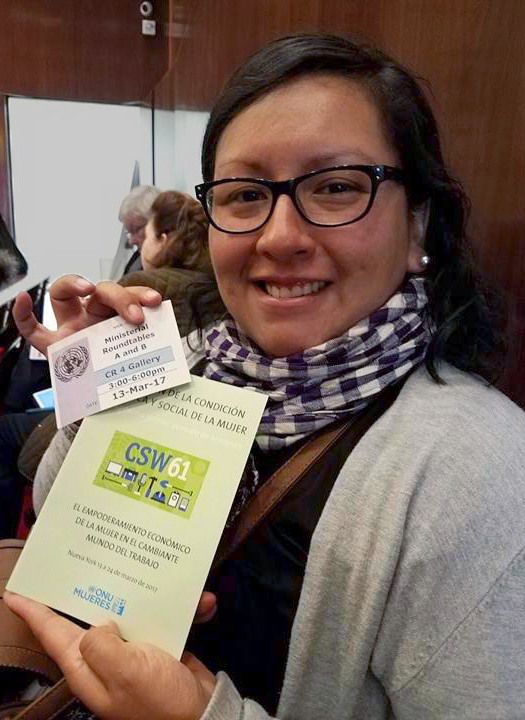 Annie Solis, Methodist Church in Peru, was part of a World Student Christian federation delegation to the 2017 U.N. Commission on the Status of Women. Photo by Melanie Yong.

The March 23-26 gathering at the Pacific School of Religion in Berkeley, California, is the fifth annual such event, said Luciano Kovacs, the North American branch’s regional secretary.

Through this ongoing program, young adults “reflect theologically and biblically as well as social-politically” on the different themes explored by the federation, he explained, and learn how to foster ecumenical dialogue in their own regions.

The various trainings offered through the World Student Christian Federation-North America also are a project of The Advance, the voluntary giving program of The United Methodist Church.

Annie Solis, who lives in the Peruvian Andes, first became involved with the federation and the Student Christian Movement in 2014. A member of the Methodist Church of Peru and its Working Group on Climate Justice, the 33-year-old attended a preparatory meeting in Lima, Peru, for the U.N. climate summit in Paris and later spoke at a training on ecojustice organized by the World Student Christian Federation Latin America and Caribbean region.

In March, Solis was part of a 12-member delegation from all regions of the federation to the 61st U.N. Commission on the Status of Women. The federation holds accreditation at the United Nations.

“Being part of a global delegation allowed me to know more about what the Christian students are doing and facing in their own contexts, either at school, work and faith communities, and their particular challenges regarding gender equality,” she told United Methodist News Service.

Solis finds gender injustice to be a “global burden” even in faith communities. However, she said, “we can take the first step discussing this issue in our communities and inviting our young friends to this conversation promoting a call to action toward healthier relationships and equal participation of men and women of all ages.”

More about the federation

The World Student Christian Federation-North America provides the coordination of ecumenical student activities in the U.S. and Canada and connects North American students to the rest of the global federation.

The primary goal of training programs and experiences such as attending the U.N. Commission on the Status of Women is the formation of lifelong ecumenical leaders who will put their faith into action consistent with social justice.

Solis, who served as a mission intern for the United Methodist Board of Global Ministries from 2012 to 2015, currently works on rural development projects and leads a Methodist women’s group.

Under the theme “Resisting Empire,” based on Exodus 32, the Berkeley training program will encourage students to reflect on how their faith “informs social justice at the grass-roots level, both locally and globally,” he added.

The Rev. Odette Lockwood-Stewart, a United Methodist pastor who serves as director of the field education and contextual learning at Pacific School of Religion, is part of the event’s planning group. The ecumenical seminary has a relationship with The United Methodist Church.

As a first-time participant in a federation event, Johnson — now a certified candidate for ordination with the United Methodist California-Nevada Conference — is looking forward to networking with other young adults. Among her social justice priorities, she said, is “the inclusion of lesbian, gay, bisexual, transgender and queer people within the UMC and fighting for equality of the LGBTQ community in general.”

Reamogetje Ngoepe is another newcomer, but one whose father was involved in the student Christian movement. The 30-year-old South African is an evangelical Christian and student at Union Theological Seminary in New York.

Ngoepe hopes to first get a sense of what others think of the theme, “Resisting Empire.” She also hopes to learn how practical information on the theme can transform societies. Of particular interest is how the church can take the lead in addressing white supremacy, both in society and in religious structures.

“I am hoping that in engaging with others, I can share my thoughts as well as learn from others and build the necessary connections to move things forward,” Ngoepe said.

Bloom is the assistant news editor for United Methodist News Service and is based in New York. Follow her at https://twitter.com/umcscribe or contact her at 615-742-5470 or