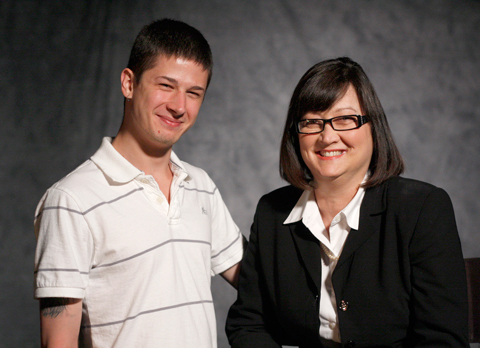 When Thomas was on the streets as a drug addict, his mother, Kathleen, routinely called the morgues trying to locate her son. She tells her story in "Broken to Peace," a new video study series produced by United Methodist Communications that focuses on people who have overcome troubled times with God's help. A UMNS photo by Ronny Perry.

Kathleen has spent her share of sleepless nights - not only tossing and turning - but also searching sinister alleyways and dangerous places where shady characters conduct business.

From the time he became a teenager, Kathleen's "happy child," Thomas, was a slave to drugs and disappeared into the darkness of the streets to find a fix. Despite love, discipline and intervention, he ended up homeless most of the time, in jail some of the time and out of control all of the time.

"This has been my worst nightmare," Kathleen said as she told her story in "Broken to Peace," a new video series that features stories of Christians who faced painful circumstances that threatened their spiritual health and sanity.

"I kept asking myself, 'What on earth could God's plan be for this?'" Kathleen added. "Did God direct this? Why would that be? God, why would you do that? Are you punishing me? Was I a bad mother? Was I not a good enough Christian?"

Kathleen's acknowledges that the heavy burden nearly broke her. She credits God for her survival.

"I think there's a purpose to everything that happens," she said. "God doesn't cause heartbreak, catastrophes and illness, but I think he redeems us through those things. I got through the dark tunnel times with God walking beside me, holding my hand every step of the way."

Others face challenges too

Kathleen is not alone in facing tough times that challenge faith.

The DVD-based study series produced by United Methodist Communications is equipped with a downloadable leader's guide that also includes devotional tools and discussion starters to serve as catalysts for conversation, constructive debate and personal sharing. A Christian educator and pastor, the Rev. Mark Price, wrote the leader's guide.

"I don't think there are many places where people can go and in a safe place talk about some of the issues that are talked about on these videos," he said. "We should be able to talk about them in church, but one of the ironies of congregational life is that people perceive themselves to have to be unbroken to be a church member &ellipsis as if part of the prerequisite for being a church member is that you have to be whole and happy and at peace.

"It's kind of like why people dress up on Sundays," Price said. "You have to put on pretty clothes to come to a pretty place. Sometimes church is perceived as a place where everybody is dressed in their Sunday best - whether it's on the inside or the outside."

Hope to help someone else

Participants in the "Broken to Peace" video series said they decided to share their stories because they hoped to help someone else. Bonnie, a Christian singer who admitted she never imagined her testimony would include depression, divorce, date rape and debt, believes God will use her story to bring hope to other people.

"I don't know why God loves broken people so much, but he does absolutely adore us," she said. "There's nothing too messy or broken for him that his love will not touch. His love for this broken world staggers me. It humbles me. It's incomprehensible and extremely personal. He's always been so intimately involved with hurting, broken people &ellipsis like me."

"Some of the stories in particular were so hard to hear and harder even to make sense of," Price said. "People will get more out of it if they don't critique or dissect the stories, but somehow make a connection to the stories.

"Just listen," he advised. "I think many times we're put off by other people's brokenness because we're afraid. We don't want to hear it because we don't know what to do with it. Be aware, however, of ways the stories in the series may resonate with similar stories in your congregation.

"We are all broken in some way or another. Just remember God is in the business of repairing that brokenness."

To learn more about "Broken to Peace," go to www.umcom.org/brokentopeace

A National Guard chaplain got Bibles, games and 150 copies of a new book about courage when he turned to Wesley Theological Seminary for help keeping soldiers occupied in Washington in the aftermath of the Capitol insurrection.
Local Church

The Rev. Bob Long drew on Sanford Greenberg’s “Hello Darkness, My Old Friend” for a pre-Christmas sermon series, inspiring a congregation and making the pastor a friend.