Talk about catching the wave.

The United Methodist Church holds a sexual ethics summit every few years, but the one last week in San Antonio gained urgency from the #MeToo Movement, the Kavanaugh hearings, the Bill Cosby sentencing and yet another round of sex abuse-related scandal in the Catholic Church.

Those events were only passingly referenced at Do No Harm 2018, coordinated by the Commission on the Status and Role of Women and the United Methodist Interagency Sexual Ethics Task Force.

But they charged the atmosphere.

“There’s a different energy here,” said Dawn Wiggins Hare, top executive of the commission. “It’s a positive and hopeful and determined energy to go out and do something and make a difference in the world and church.”

Some 280 people, mostly clergy and conference staff, attended this time, crowding the main conference hall of an airport Holiday Inn, as well as smaller meeting rooms for breakout sessions.

“There’s no way I could not be here,” she said. “Women are no longer keeping quiet about what’s happening to them. … In the past three weeks, seven women have come forward to talk to me about their sexual assault or rape.”

The Rev. Idda John Ngowi, of the North Katanga Conference in the Democratic Republic of Congo, came to gather ideas for addressing sexual harassment and abuse in Africa, including in the church.

“We need help on this subject,” the United Methodist pastor said through a translator. “The response is not there.”

In January, the Council of Bishops joined the Commission on the Status and Role of Women in issuing a statement supporting the #MeToo and #ChurchToo movements and strongly encouraging reporting of sexual misconduct, including within the church.

“Persons’ lives are changed by boundary crossings and sexual misconduct,” said Bishop LaTrelle Easterling of the Baltimore-Washington Conference. “Everybody should be prioritizing this (response) work.”

He also referred without specificity to recent news events.

“I thought we would have been farther along by now,” Schnase said.

Clergy sexual misconduct is a focus of Do No Harm, and this year’s conference featured a short play by the Rev. Walt Frazier, a Mississippi Conference deacon and licensed counselor.

In the fictional skit, acted by clergy and laity of the Mississippi Conference, the pastor of the aptly named Wilderness United Methodist Church ends up romantically involved with a church member who comes for counseling about her unraveling marriage.

That he crossed the line is clear, but the question-and-answer period yielded plenty of questions and comments about how the matter was reported and how the church and conference responded.

The Rev. Sally Bevill, pastor of Hawkins United Methodist Church in Vicksburg, Mississippi, played the woman who sought counseling. She noted that the troupe had performed the same skit for the Mississippi Conference, but got a much stronger reaction at Do No Harm.

“The people gathered in this conference are so aware of what’s going on,” Bevill said.

Hare describes Do No Harm as a “train the trainer” event, and much of the discussion went to preparing conferences and churches for dealing effectively with reported misconduct. For example, conference response teams shared best practices for helping congregations reeling from reported abuse by clergy or church staff.

The conference also offered a detailed explanation of church law and policies, as well advice from insurance company experts.

Schnase and others suggested conferences vary widely in their sensitivity and commitment to dealing with sexual misconduct.

“We pat ourselves on the back a lot in the Methodist Church. We say we’re really far ahead of the Baptists. … And yet, we’re still light years away from where we need to be,” said Bill Waddell, lawyer for the Council of Bishops.

Plenary speakers included Jennifer Freyd, a psychology professor at the University of Oregon who has researched and written extensively about sexual harassment and assault, and institutions’ failure to address it.

Though she has focused on colleges and universities, Freyd offered a range of suggestions for how other institutions, including the church, can better respond. 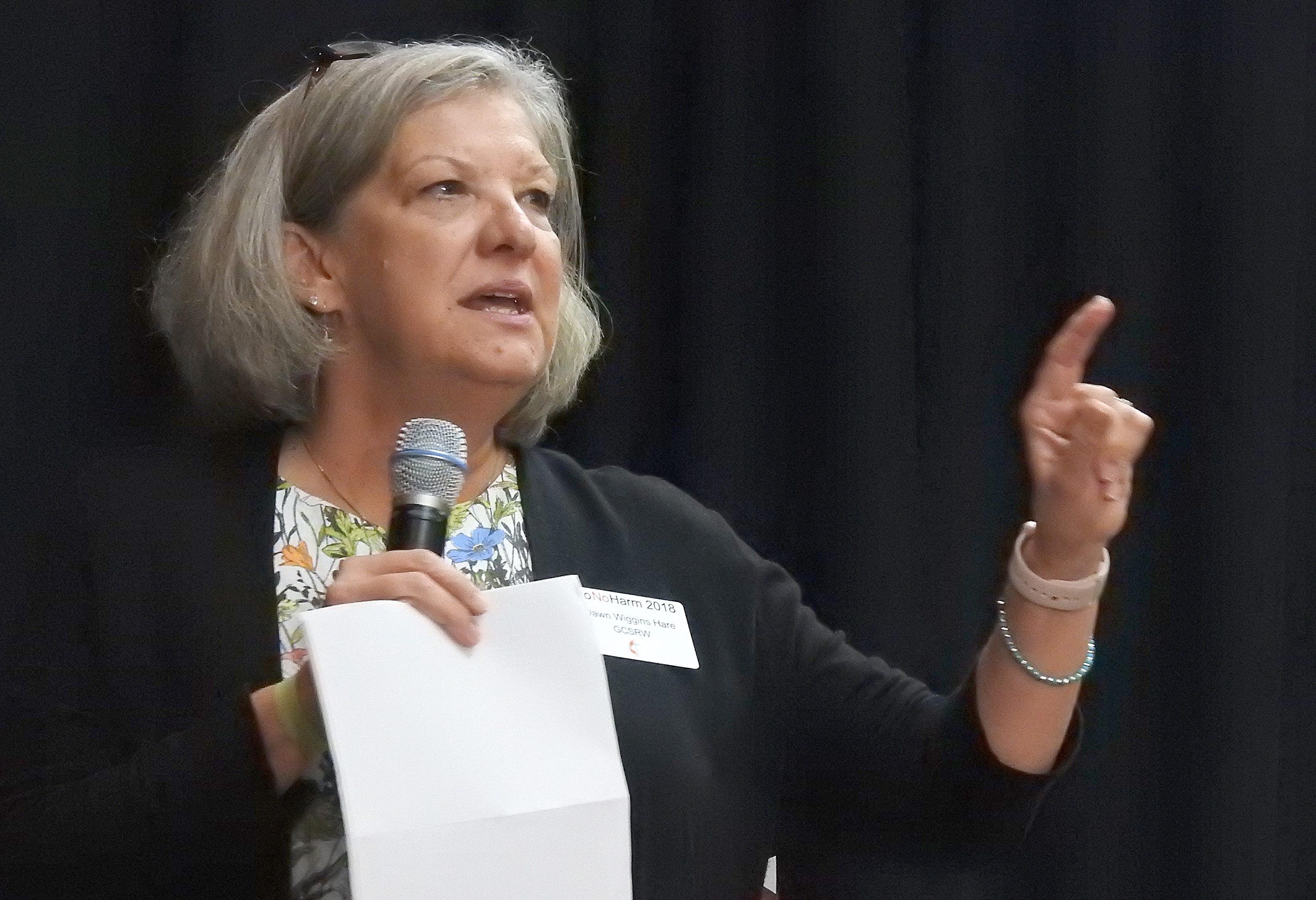 Dawn Wiggins Hare, top executive of the General Commission on the Status and Role of Women, speaks at the 2018 Do No Harm conference of The United Methodist Church. The sexual ethics summit drew clergy and laity from across the denomination, including the Central Conferences. Photo by Sam Hodges, UMNS.

“Bear witness, be accountable and apologize,” she laid out as crucial steps for leaders.

There was discussion too of how the church can better assist members or visitors who report sexual harassment or assault in family or workplace settings.

“As a pastor, I have had the privilege to bear witness to these stories, and to hold women in a place of empowerment and encouragement,” said the Rev. Rebekah Solar, a licensed local pastor in the Upper New York Conference.

One workshop dealt with how the church can better support clergy accused of sexual conduct. The Rev. Scott Campbell led the session, drawing on his experience representing accused clergy in church trials.

“To have a venue at which people are being exposed to the concerns, the needs, the rights of people who are victimized, but to also talk about the converse of that, in human terms, is a major thing, and I’m grateful,” Campbell said.

The Virginia Conference’s Bishop Sharma Lewis, preaching in closing worship, asked that The United Methodist Church become a prophetic voice regarding sexual misconduct. She urged more of a financial commitment, too.

“There’s not enough money in this Commission (on the Status and Role of Women) to do the work that they are called to do for this denomination,” Lewis said.

The commission has a website for sharing sexual ethics resources, and Hare said planning is underway for building on the momentum of Do No Harm 2018.

The Rev. Bob Smith left the event with his own action plan.

“We don’t have an official response team in Alaska,” said Smith, pastor of Turnagain United Methodist in Anchorage. “We definitely will.”

The Rev. Juanita Rasmus of Houston will offer a five-hour “Learning to Be: Immersive” workshop, drawing on insights she gained in coming back from major depression.
Human Rights

A new website from the United Methodist Commission on the Status and Role of Women is designed to help people navigate the process for addressing sexual misconduct in the church.
Human Rights