How seriously do you take the vow, "till death do us part?"

If you look at the statistics - half of all first-time marriages end in divorce - it seems not too many people say "I do" forever.

The Vow, a movie based on Kim and Krickitt Carpenter's story, debuted in theaters in 2012 and was the top movie of the opening weekend, making $41.7 million. However, the romantic movie is not even close to telling the true story of faith and commitment that has kept the Carpenters devoted to each other for 20 years.

Their saga began 10 weeks after their wedding on Sept. 18, 1993. They were in a serious automobile accident that left Krickitt with no memories of her husband or their new marriage. She suffered a severe brain trauma that wiped out 18 months of her life - the entire time she and Kim met, dated and married.

While he was still madly in love with her, he was a stranger she wanted nothing to do with.

The glue that kept them together was their faith in Christ and the promise they had made before God.

The Carpenters attend First United Methodist Church in Farmington, N.M. "Both of us know unconditionally we would not have made it through this ordeal without the Lord being in the center of it all," Kim Carpenter told United Methodist News Service.

Krickitt spent months in a coma and then months more in physical therapy, but she has never regained those 18 months of memory. Her recovery was slow, her personality changed and at times she told Kim she hated him. 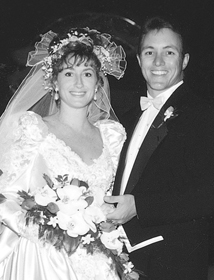 "At a low point in my life, I didn't think this marriage was going to work. I didn't have the faith that we were going to make it," Kim said. "At the same time, I wasn't going to leave her in the state she was in; I was vowing to stay with her."

Story gets out
The media first learned of their story when a reporter came to interview Kim about his work as a baseball coach. In the course of the conversation, the story came out.

When the Carpenters renewed their vows and had a second wedding in 1996, it was a media circus. People were amazed and encouraged by their story, so Krickitt asked God to use their story to show others his amazing love and power.

They wrote a book about their story in 2000 and updated the book to coincide with the opening of the movie on Feb. 10.

"We enjoyed the movie but we were a little frustrated by the artistic license they took," Kim said. "The dramatization in the movie was much greater, but it is hard to put 20 years of challenges into 103 minutes."

"A Scripture I really hold onto is Philippians 4:13: 'I can do all things through him who strengthens me.' I believed I was called according to God's purpose, and I followed with my whole heart," she said.

The United Methodist Church and marriage

Kim said he has taken offense to some of the media reporting him as "heroic, courageous, manly."

They insist they are an ordinary couple with two children, Danny and LeeAnn.

"It is amazing we live in a world that there is such a big deal made about a man and woman who simply did what we said we were going to do," Kim said.

The book and the movie are providing a platform for them to talk about their faith.

"People all over the world are seeking something higher, some message," Kim said. "We have been very grateful for the prayers and well wishes we have received. We know the Lord is not going to give us more than we can handle."

This feature was originally published February 12, 2012. "The Vow" is still available for purchase or rent on Amazon Video and on other platforms.