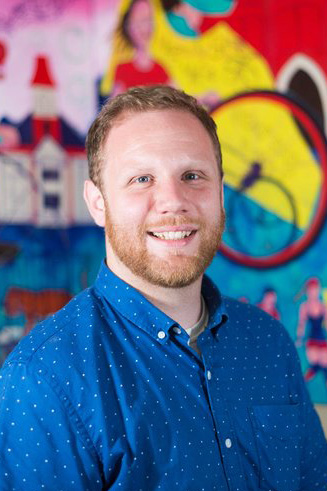 The Rev. Eric Mayle
Photo by Michael Williams, courtesy of Centenary United Methodist Church.
We find ourselves at a critically important moment in time as the white church. I have little doubt in my mind that the killings of Ahmaud Arbery, Breonna Taylor and George Floyd will be addressed in many white churches — maybe even in most.

Will we address these deaths so vaguely that only those who are listening for it will hear it? Will we speak out only enough so we can say we weren’t silent in the face of racism? How much weight will we give to fear of rocking the boat?

For many white church leaders, our statements against racism are the lowest common denominator between what our conscience requires and what our congregations will allow.

Our response to racism can’t begin and end with prayers for healing and peace in our nation or for more tolerance and understanding in our world. We need to say the names of Ahmuad Arbery, Breonna Taylor and George Floyd in the pulpit and mourn their deaths. We need to talk about how they died and why they died.

UM News publishes various commentaries about issues in the denomination. The opinion pieces reflect a variety of viewpoints and are the opinions of the writers, not the UM News staff.
We need to acknowledge that their deaths are not the disease but only a symptom of it. Racism is the disease and it's much larger and uglier than these most recent killings, as tragic as they are. If we do not connect them to the larger system of racism, we risk letting ourselves and our congregations off the hook too easily once the guilty have gone to prison.

If we as the white church are going to have any impact on racism, we must not just talk about incidents of racism, but about the systems of oppression that produce these incidents in our headlines today.

That’s risky territory. We’ve heard it said that people loved Jesus when he helped the sick and the poor, but they crucified him when he asked why there were so many sick and poor people.

I get it. Often, congregations are much more politically and theologically conservative than their ministers and church leaders, so leaders feel they have to tread lightly. I know, too, that for many in our churches, racism is a partisan issue, and most churches do not want their preacher to be “political” in the pulpit.

I also get that we have to meet people where they are and preach in such a way that they can actually hear and receive the message, otherwise, what’s the point?

I understand that speaking out about things like institutionalized racism and white privilege is a tremendous risk for church leaders in many white congregations. But the stakes are too high not to; black men and women are dying in the streets.

Of course, this is nothing new. As Will Smith observed, “Racism is not getting worse, it’s getting filmed.” But we’re at a point now where this conversation has been pushed to the forefront. We can no longer avoid it. We have an obligation to speak out and to use this momentum to begin to cultivate a culture of antiracism in our church communities.

I often think about the white clergy to whom Dr. Martin Luther King Jr.’s “Letter from a Birmingham Jail” was addressed. We forget that his letter wasn’t a response to white segregationists, but to well-educated, moderate white clergy, including two Methodist bishops.

They likely considered themselves to be allies of King. They admired him. They agreed with him that segregation was unjust and needed to end ... in the right way and at the right time.

It wasn’t the silence of white clergy that moved King to pen arguably his most powerful work. It was their timid and moderate responses to racism.

I suspect the white clergy King was responding to were trying to negotiate many of the same crosscurrents in their congregations that we are today. Yet we recognize that they were on the wrong side of history. We recognize their attempted redirection of King’s work as a polite rationalization for their own fear to take any meaningful risk for racial justice. They lacked the holy boldness given by the Spirit at Pentecost.

The same remains true today: The single greatest obstacle for the white church’s response to racism isn’t silence, it’s being lukewarm. It’s being shallow and timid in how we address racism in the church. It’s being unwilling to take a risk. It’s being afraid to say black lives matter for fear that this basic affirmation of human life will be perceived as a partisan political statement.

To my fellow white church leaders — moderate, progressive and conservative: I invite you to join me during this season of Pentecost in taking risks for racial justice in your congregation.

If we (myself, first and foremost) invested just a tiny fraction of the time, energy, thought and meetings many of us have spent worrying about a denominational split on antiracism, our churches and denomination could make a real difference in communities and society for racial justice.

May we take risks. May we make investments in racial justice. May the presence of the Holy Spirit given to us at Pentecost, which is alive and active today, empower us to do so.

Mayle is the Minister of Community Justice at Centenary United Methodist Church in Macon, Georgia.