By the early 1940s, mainline Protestant churches had come to understand the power of radio. Denominations, including The Methodist Church, collaborated on a weekly program that put some of their best preachers on the air.

The name “The Protestant Hour” would eventually take hold, though air time was never an hour — only 30 minutes, including choral music.

At its height, more than 600 stations carried The Protestant Hour, as did the Armed Forces Network. C.S. Lewis was among its speakers, reading the manuscript that became his book “The Four Loves.”

This year marks the 70th anniversary of The Protestant Hour, now known as Day1. The show is carried on about 200 stations.

That’s a much diminished reach. But Day1 leaders give thanks for a rich history; for the continuing voice of preachers from The United Methodist Church – successor to The Methodist Church – and other mainline Protestants on radio; and for the options that the Internet presents for sharing sermons old and new.

“If you want to have the message of the mainline church out in the marketplace of ideas, through the media, it’s hard to find,” said the Rev. Peter Wallace, Day1 host and executive producer, and an Episcopal priest. “We’re trying to be as effective and intentional as we can about being out there.” 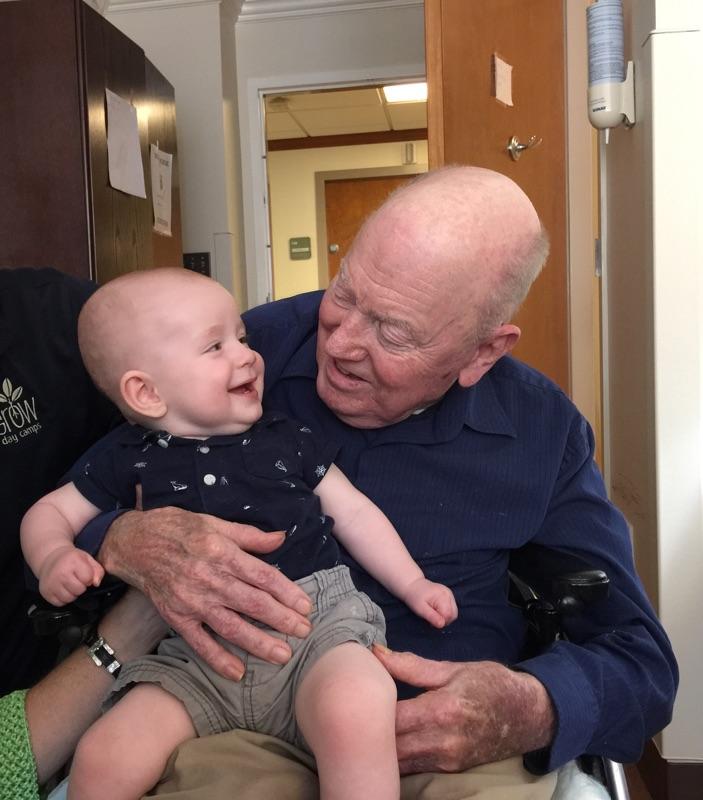 When he was a pastor in the Atlanta area, retired United Methodist Bishop Bevel Jones III would invite preachers from The Protestant Hour to speak at his churches. He’s seen here with great-grandson Eli Jones. Photo courtesy the Rev. David Bevel Jones.

A committee called the Southern Religious Radio Conference, consisting of Methodists, Lutherans, Presbyterians and Southern Baptists, created the program. The Southern Baptists would soon go their own way, but the others stayed and the Episcopalians signed on. The first broadcast aired on April 1, 1945, over WSB Radio in Atlanta.

Soon other Southeastern stations joined in providing airtime. By 1953, with the name “The Protestant Hour” firmly in place, the program began to be produced in the new, custom-built Protestant Radio and Television Center at United Methodist-related Emory University in Atlanta.

U.S. Sen. John Sparkman, a Methodist layman from Alabama, spoke on the program. The first woman speaker, in 1946, was a Methodist – Mrs. J.D. Bragg, president of the Woman’s Society of Christian Service.

Mostly, pastors shared the gospel and addressed aspects of Christian living, while also reflecting the tensions of the time, including fear of communism. But sometimes social issues were addressed directly. The Rev. William Wallace, pastor of St. Luke’s Methodist Church in Oklahoma City, Oklahoma, used his Feb. 9, 1947, sermon to preach on race relations.

“We need to be stripped of our prejudice,” he preached. “The Southern Christian white man needs to take the lead in this great problem before our nation.”

The Protestant Hour’s height of popularity was in the 1960s and 1970s, and among its faithful listeners was a young United Methodist pastor in Clinton, South Carolina, the Rev. Will Willimon.

“The Protestant Hour was the sole place that I got to hear preaching,” said Willimon, now a retired bishop who teaches at Duke Divinity School. “I vividly remember getting up early on Sunday morning and sitting by the radio with a cassette recorder and hearing (Lutheran pastor) Edmund Steimle. I never heard preaching like that. It was very influential.”

Retired United Methodist Bishop Bevel Jones III strongly supported The Protestant Hour and recruited its best-known preachers to speak in his churches when he was a pastor in the Atlanta area. He also kept transcripts of their sermons in his study, and his young son found them there.

“I would sit at Dad’s desk and read those transcripts the way other boys my age would read comic books and science fiction,” said the Rev. David Bevel Jones, pastor of First United Methodist Church in Decatur, Georgia. “I was so enthralled that on Sunday mornings I’d get up early enough to listen to the broadcasts.”

In 1984, The Protestant Hour won a Peabody Award for broadcasting excellence. But the same decade brought deregulation of radio, and with that came a loosening of community service requirements. Fewer stations were willing to give The Protestant Hour free air time.

Denominations pulled back on the financial and staff support they gave the program.

By 2001, the Protestant Radio and Television Center building had been sold to Emory, which eventually razed it. The Protestant Hour relocated within Atlanta, and in 2004 merged with the Episcopal Media Center to become the ecumenical Alliance for Christian Media.

By then the program had been renamed “Day1,” a reference to Sunday and to the creation story. “The Protestant Hour” had begun to be confusing title in a culture where knowledge of Protestantism’s history had dwindled.

“I would get calls from people asking, ‘What are you protesting?’” said Wallace.

These days, The United Methodist Church, the Evangelical Lutheran Church in America, the Presbyterian Church (USA), the Episcopal Church, the United Church of Christ and the Cooperative Baptist Fellowship are the program’s affiliated denominations. Preachers come from those and a few other denominations.

Funding sources include foundation grants and individual gifts. Churches of pastors who preach on the program are asked to contribute, though it’s not required.

During the recent recession, Day1 had to lay off staff and cut other expenses. “We were really fragile,” Wallace said.

Finances have improved, he added, and the nonprofit Alliance of Christian Media’s public IRS reports confirm that expenditures and revenues are nearly in balance.

Day1’s sole big station continues to be WSB, but it’s heard as far away as Liberia and Nigeria. Reach is extended by the website, which offers sermon podcasts and transcripts.

Bishop Kenneth Carter of the Florida Conference has preached on the program and serves on its board. With conservative evangelical religion easily found on TV and radio – through paid time on Christian stations – he’s grateful for an alternative.

“Day1/The Protestant Hour gives the church a mainline voice alongside preaching and speech that is sometimes at odds with how we would want to present the gospel: as a source of grace, reconciliation, and peace,” Carter said by email.

Anniversary observances include a June 28 program on the history of The Protestant Hour. Later this year, Day1 will debut a new website that offers digital recordings of sermons from the old days.

“That is going to be a treasure trove, and so very helpful to those of us who teach preaching in seminaries.”

This article draws on a paper called “Preaching on The Protestant Hour: A Historical Review of the Radio Archives: 1945-1993,” by the Rev. Louis C. Schueddig.