Editor's Note: A delegation of United Methodist bishops and mission staff visited China in April to strengthen existing ties with the Protestant church there. This part of a UMNS series - The Church in China - focuses on the efforts to serve those who live on the margins of Chinese society.

Near the former Protestant seminary in central Nanjing, the smell of baking bread is evident even before the sign leading to the production and training space for the Amity Bakery is visible.

One trainee, Huang Wen Hui, 28, dressed in a white shirt with the Amity logo, light blue apron and white cap, offers a tray of cookie samples to visitors and smiles broadly as she receives thanks in return.

Huang, one of the participants in the Amity's training program for persons with mental challenges, has worked at the bakery for four years.

"She used to be very, very shy," says Zhang Yun, the teacher. "She would hide from strangers. Now, you see, she's very comfortable with strangers."

A sixth of the Amity bakery staff, including a 75-year-old, is mentally challenged, says the manager, Zhu Yanwei. The program involves a lot of repetitive training to help participants learn specific tasks.

Amity would like to be able to get these trainees employed by other businesses as well "but we find that very difficult," Zhu says. "In Chinese society, a lot of people can't see them (the mentally challenged). They think they don't exist."

Expanding the impact of civil society

For the past 28 years, the Amity Foundation - with a staff of 70 at its Nanjing headquarters, 70 more in other locations in China and 10 in Hong Kong - has worked to assist those on the margins of Chinese society.

Now, as one of China's first nongovernmental organizations, it is helping expand the capability of civil society to address social problems.

The need for churches and other groups to engage in charity work was acknowledged by the State Administration for Religious Affairs and other government agencies in February 2012.

Transition to a market economy - symbolized by the retail outposts of luxury brands in Shanghai, Nanjing and Beijing - has brought "emerging social problems," She Hongyu, an Amity executive, told a United Methodist delegation visiting Nanjing in April.

"The Chinese government already has started social reform," she said. "They think the government should find more space for social society."

In recent years, Amity has taken on a new role as an incubator of other NGO start-ups, assisting 22 organizations since 2009 at its NGO development center in Nanjing.

That work coincides with the new emphasis on the involvement of civil society in social needs - a trend the Chinese media calls "social construction," explained Tian Meimei, the center's director.

In facilities provided by the local government, the NGO development center offers office space, training from Chinese and international professionals and other resources. Amity also negotiates with the government to get the NGOs registered, Tian said.

A number of visitors have come to the center, which is regarded "as a tool or vehicle of change, for capacity building," added She.

NGO support has now expanded to three cities and, as a side benefit, Amity now has new local partners. One new NGO, for example, has a big migrant workers program. 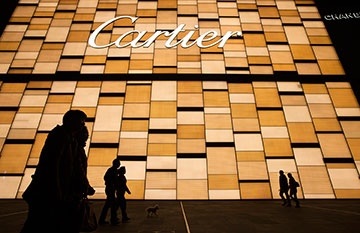 Pedestrians make their way past an upscale shopping mall in Nanjing, China. Transition to a market economy has brought "emerging social problems," She Hongshu, an Amity executive said.

Amity is not the church, She pointed out, but a church-related organization. "It's not the role of Amity to evangelize Christianity," she said. "We're not allowed to do that. More and more, we see that Christian values are demonstrated through the staff. Sometimes, we think the actions speak louder than words."

The United Methodist Church has been a long-standing partner with Amity. The denomination's voluntary giving fund, The Advance, currently supports 22 projects in China. One of the oldest projects is the Amity Teachers Program, which provides long- and short-term volunteers to teach English in less developed areas.

Involvement in elder care is becoming increasingly important. In Nanjing, the elderly are 18 percent of the population, She pointed out, and taking care of them "is really beyond the capacity of any government. They now realize the importance of civil society providing good care and support."

In March 2012, leaders of 28 elder care organizations from eight provinces participated in management training and the first meeting of the Amity Social Service Network. Amity International Philanthropy Valley, a new elder care project in Qixia District, Nangjing, is a cooperative venture with the local government.

The China Christian Council's social service department, started in 2003, also is working to set standards for church homes for the elderly. Other programs include providing rehabilitation for autistic children, advocating for HIV/AIDS awareness and care and promoting community development in western China.

"This idea (social service) is quite new for pastors in China, especially the west part," said Chen Yue, a department staff member. After receiving training, "they really know the church has to take responsibility."

The social service efforts of Christians may seem small, given China's vast population, but these programs have an impact, even if only to build awareness. 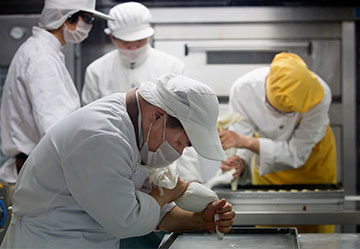 Student bakers, under the supervision of a special education teacher (wearing yellow) create pastries at the Amity Bakery in Nanjing, China.

At the retail bakery store that Amity opened on Huaqiao Road in May 2012, a large painting of Jesus blessing some bread covers part of a wall opposite racks holding cookies, doughnuts and pastries for sale. Bread is baked in the afternoons.

A month after the opening, Robert Wang, deputy chief of mission at the U.S. Embassy in Beijing, sampled the wares at the store and talked to Zhou Jian, a baker with Down Syndrome, as part of a visit to the Amity Foundation.

Later, in a formal address at Amity's Millionth Bible Celebration last November, Wang praised the foundation's ability to generate compassion through its work with those in need.

"On my last visit here, I visited some of Amity's projects that provided training for migrant workers as well as those with disabilities to help them earn a living and live a normal life," he said. "I was deeply moved by all of the volunteers at the foundation."

"This is what it means to be Christian," Wang said.

He is not the only one impressed by the bakery and its mission. Earlier this year, a comment about Amity Bakery posted on Sino Weibo, a Chinese-language micro-blogging platform, attracted more than 20,000 reposts and 1,500 comments in less than five days.

On Feb. 20, as a result of the social media attention, the Amity Bakery sold more than 40,000 baking products, which was the equivalent of about half their usual annual production, according to the Global Times, an English-language media outlet in China.

The cookies are delicious, but sales have declined again after that spike in sales. Three mentally challenged employees had worked here, Zhu said, but business has been slow this spring, so they were transferred to another shop. Only one now works here in the afternoons.

Zhu told the Global Times he was both overwhelmed by the orders and more importantly, about the future of the store, which has been losing money over the past few years. "What we need is a more sustainable model so we can continue to do good deeds," he said.

Communicators for The United Methodist Church in Africa and the Philippines share what the church is doing in their regions to stop the spread of the novel coronavirus.
Social Concerns

A group of United Methodists visited Cambodia to explore what the church might do to fight human trafficking.